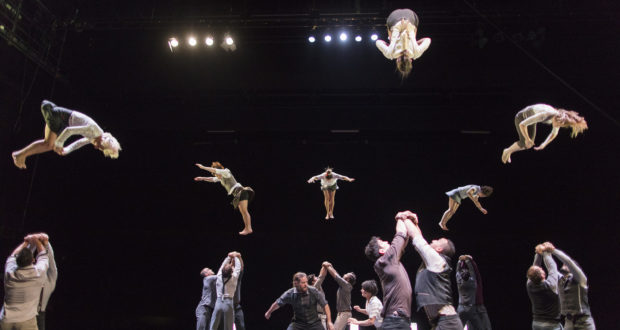 Beyond the Big Top: Contemporary Circus & Compagnie XY’s ‘It’s Not Yet Midnight…’

Those who think they know what to expect from the circus are sure to have their expectations shattered by Compagnie XY, the French contemporary circus troupe bringing their high-flying skills to the Roundhouse this April. The acrobatic company’s new production, It’s Not Yet Midnight…, combines circus, dance and a cast of 22 acrobats to jaw-dropping effect. In this guest blog, Roundhouse’s circus producer Daniel Pitt tells us more about what to expect from this gravity-defying production – and why contemporary circus is an art form that should be on your radar.

Clowns on tiny cars, jugglers throwing clubs and knives, acrobats standing on shoulders, ladies swirling between aerial silks, flying trapeze (with an intentional mistake to raise the tension in the room), a ringmaster in a red jacket and top hat, maybe even a lion tamer, all under a tented big top . . . Are these the kinds of things that come to mind when thinking of circus?

There are still some traditional circuses of this kind, but in the last third of the twentieth century things began to change, with a movement towards ‘contemporary circus,’ an art form that expands circus’ definition. Contemporary circus incorporates theatre, dance and narrative, borrowing from and fusing it with other art forms, going beyond the skills and using them in new ways, frequently out of tents and in theatre buildings. It’s this hybrid art form, with the huge breadth of styles that it encompasses, pushing at the boundaries of the form, that Roundhouse is proud to present and support the development of in our programme.

As part of our collective stereotype of ‘circus’, there’s a nostalgic, vintage aesthetic of weird acts and extraordinary, niche skills. But contemporary circus is broader, more varied, more modern and more in-line with other contemporary art forms than you might think. From its beginnings, circus has always been innovative – it was ‘invented’, after all, 249 years ago, when Philip Astley put together a series of performers and horse acts in a round building in the Vauxhall Pleasure Gardens. It has always been kept alive by itinerant artists with a tradition of subversion and counter-culture, cross-pollinating with other art forms. Contemporary circus is the logical, and exciting, current incarnation – a cutting-edge art form unlike any other.

So what does contemporary circus look, sound and feel like now? You might find it in a tent in a field, but it’s more likely to be found in a theatre, in the streets, in a club, a warehouse – or anywhere else someone wants to put it! It’s more commonly a full-length show than a cabaret act. A contemporary circus production may use the physical skills, techniques and attitude of circus, but it might well use them in new ways. It might be more influenced by theatre, physical theatre or contemporary dance – or live art, or digital art or visual art. It might be risky, dangerous, weird, freaky – or it can be beautiful, poetic, expressive, personal. The most interesting contemporary circus work will always be relevant socially, culturally or politically.

And how does It’s Not Yet Midnight… fit into the broad spectrum of contemporary circus? Compagnie XY perfectly encapsulate how the heritage of circus has been combined with artistic, theatrical and choreographic innovation to create something extraordinary. The company (there’s lots of them – 22 on stage) live communally, travelling constantly in the same tradition of touring tented companies, they train with immense dedication – they are world-class in their skill level – and combine their acrobatics with dance, theatre, politics and social ideals, while retaining the risk and the spectacle of circus on a grand scale.

Roundhouse aims to be London’s flagship venue for circus, especially on a large scale: as a round space, it’s perfectly suited to be a space for circus (a word that was named for the shape). It’s Not Yet Midnight has a large-scale cast that’s increasingly rare on London stages, especially from international companies. The company have created a performance that’s both made by, and about, large numbers of people being together, and they’re passionate about the collective act of watching theatre and circus – as well as the creation and performance of it. As a French company, while we witness the rise of the Right across Europe, it’s ever-increasingly important that work such as this can find a home in London . . . I’m writing this the night before Article 50 is about to be triggered, and the show will end on the night of the French elections, with a risk of Marie Le Pen gaining power – it’s everything the show stands against.

Maybe you’d like to think of it as watching a ballet where the dancers can throw each other through the air and balance on each-others’ shoulders as gracefully as they move across the floor… or maybe it’s like a traditional circus but all the performers are doing all the acts together. Think of it as a play without words – a masterclass in body language and movement – or an Olympic acrobatic competition that will make you feel and think about the world around you rather than just their technique. However you’d like to think of it, we can guarantee you It’s Not Yet Midnight… is extraordinary, pertinent, beautiful, emotive, important entertainment and I hope you can see it.

It’s Not Yet Midnight… is playing at Roundhouse from 10-23 April. More information is available here.