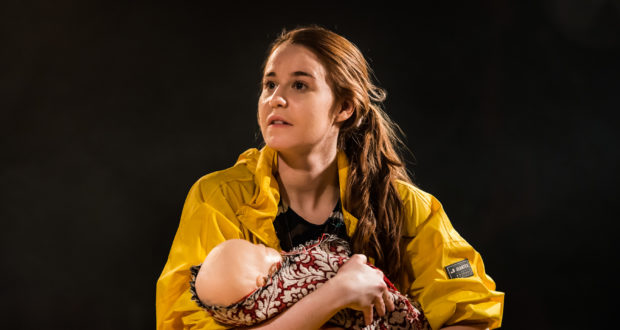 Pros: Interesting staging, combined with well-rehearsed choreography and movement. Cons: A tad confusing at times and doesn’t work hard enough to fulfil Brecht’s wish of making the audience think. Brechtian theatre is difficult, both in meaning and in staging, so any company that chooses to tackle the challenges that come with this playwright and practitioner’s work, should be commended. If you are not familiar with Bertolt Brecht’s “epic” theatre then you may, at points, wonder what on earth is going on. Particularly when actors start talking to you in the interval instead of looking over their lines or stretching or doing&hellip;

Some excellent examples of Brechtian theatre embedded within one of Brecht’s greatest pieces. Falls short of pushing the thinking boundaries, making it slightly unfulfilling.

User Rating: 4.55 ( 1 votes)
Brechtian theatre is difficult, both in meaning and in staging, so any company that chooses to tackle the challenges that come with this playwright and practitioner’s work, should be commended. If you are not familiar with Bertolt Brecht’s “epic” theatre then you may, at points, wonder what on earth is going on. Particularly when actors start talking to you in the interval instead of looking over their lines or stretching or doing whatever it is that actors do during intervals. There is a long list of things that characterize a Brecht play and if that is what you’re looking for, then look no further because Lazarus’ version of The Caucasian Chalk Circle ticks all the boxes, with narration, song, audience interaction, multi-roling – the lot!

The story is set in the Soviet Union during World War II and follows the journey of a poor servant girl (Collette O’Rourke) who risks her life to save the baby of a noble family. In making a quick getaway to escape the impending civil war, the parents of the baby have forgotten to take their son with them and so it is Grusha who runs away from soldiers and endures an arranged marriage to keep the child safe. The story seems simple but this newly adapted, modernised version can get quite complicated. With the devastating refugee crisis and the implementation of ‘Brexit’, director Ricky Dukes has clearly worked hard to make the story as current as possible but there are times when things get too modern and border on ridiculous. The festival vibe that runs throughout the play is ever-so-slightly baffling, particularly in the random rave moments where actors thrust and gyrate to looped drum and bass music.

The cast of 10, each of whom plays multiple characters, is led by Robert Metson who does an excellent job as the narrator and love interest. Lakesha Cammock and Elizabeth Appleby are hilarious as the deceitful Old Peasant and trolley-pushing Nanny. It is the staging that is most impressive here, however. Despite Brecht preferring minimalism when it came to set, designer Sorcha Corcoran has chosen to raid her cupboards of boxes, Christmas decorations, cleaning signs and suitcases, piling the stage high with random bits of “stuff”. There is even a silver tea trolley that baby Michael is regularly and rather comedically dumped on. The way it is all manoeuvred and choreographed is quite brilliant, and a clear strength of Dukes’ direction. With the recurrent theme of loops and circles, it is fascinating to watch the cast lug boxes and suitcases around in circles to give the idea of packing up. The formation of a bridge that Grusha must cross is also simple but creative.

The Caucasian Chalk Circle is a hard piece to stage and Lazarus Theatre Company haven’t done badly at all at bringing Brecht’s most epic work to life. But Brecht’s intention was to get the audience thinking and questioning the events and situations that arise. For him, theatre was about change; about getting an audience to put themselves in the protagonist’s shoes and ask themselves, “what would I do?” Unfortunately, this is the major thing that Lazarus don’t quite manage to do enough of. Though staging and creativity is good, the focus has shifted too far away from Brecht’s main aim. Rather than questioning your own ethics and morals, you find yourself questioning the story more, and wondering what has actually happened.

This isn’t to say, however, that the production isn’t worth a watch. There are some brilliant moments and with a little more focus on the text, this would be a production that had it all.