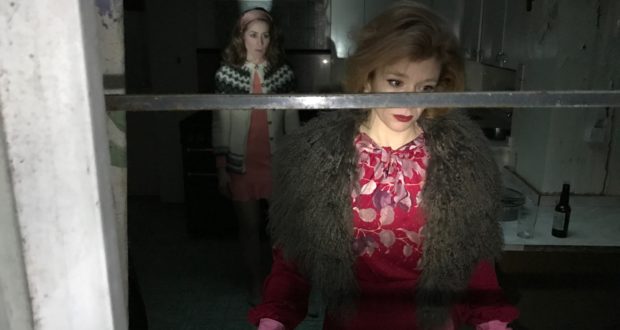 Pros: An alternative night out, in a house that’s a real treat for Grand Designs fantasists

Pros: An alternative night out, in a house that's a real treat for Grand Designs fantasists Cons: Far too long to support the story line presented I have never attended an immersive theatre show that lasted much longer than an hour. I believe there is a reason for this; a time limit creates stakes. Unfortunately, Suicide at Vine House clocks in at over two and a half hours and by the end of the show my enthusiasm was waning. Furnished with an address and high hopes, I arrived at an abandoned and run-down town house nestled in a residential street in Westminster. We&hellip;

Slip on your trainers, assemble a group of your mates and solve the mystery! This will not be your average cushy night at the theatre!

User Rating: Be the first one !
I have never attended an immersive theatre show that lasted much longer than an hour. I believe there is a reason for this; a time limit creates stakes. Unfortunately, Suicide at Vine House clocks in at over two and a half hours and by the end of the show my enthusiasm was waning. Furnished with an address and high hopes, I arrived at an abandoned and run-down town house nestled in a residential street in Westminster. We audience members were divvied up into teams, given torches and told that we would be encountering apparitions of the dead in order to discover the truth surrounding the mysterious demise of the head of the household in 1967. In fairness to the production and its actors, your experience of the evening will be coloured by the other people in your group. Their enthusiasm, cynicism or good sportsmanship will have a direct bearing on how much fun you have.

We meet the actors in a tableau halfway through telling a raucous post dinner cocktail story. Throughout the show characters are paused and rewound, but in this first scene the freeze-frame is uncomfortable because we’re just in too close proximity to the actors to be able to miss their twitching eyelids and shallow breaths.  The tone is all stiff upper lip and ‘old bean’ RP fun but very soon a letter is delivered by a bumbling policeman and the mood changes. This is when we’re instructed by the supernatural docents curating our quest to “follow your apparition”, as the plot scatters its way around the house. Moving off, I couldn’t help but think that something didn’t quite seem right. We were meant to be seeing moments from the past and parts of the house were derelict, yet others were fully furnished and quite tidy. At times the apparitions didn’t see us and at other times we were given long secluded moments to interview them. These inconsistencies might have been less noticeable had we been under pressure to solve the mystery.

Rather than being given free roam, we are told by the spiritual guides clutching clipboards where we are meant to go next and what we ought to find (wink wink nudge nudge – keep your eyes peeled for clues!).The house however is sprawling and there is a great deal of climbing up and down stairs and tramping out onto roofs. As the clock struck ten I mused that we had spent more time exercising than seeing the actors! That is a shame because conceptually the story is strong, it just needs chopping. The creators have woven an elaborate story that brings to life not just the four main characters but their hinterland and circle of acquaintances. There is no shortage of red herrings, and our group certainly barked up many wrong trees before…not working it out at all!

The most atmospheric scenes take place in the more derelict spaces. A cat-fight in a dimly-lit kitchen where the hostess washes Champagne glasses on repeat is really quite haunting, and there is something very pitiful about that hostess as she asks every group that passes through ‘are you the plumber?’. Sadly, when atmosphere and a sense of drama build up, they are promptly dissipated by another return to the production control room. Suicide at Vine House is a jolly romp with some clever plotting, but its length and complex logistics make for an overall experience that rather lacks a pulse.

Studied English lit in the heathen former colony now governed by a radioactively tinted overlord. A theatre aficionado, lover of dumplings and crosswordophile.