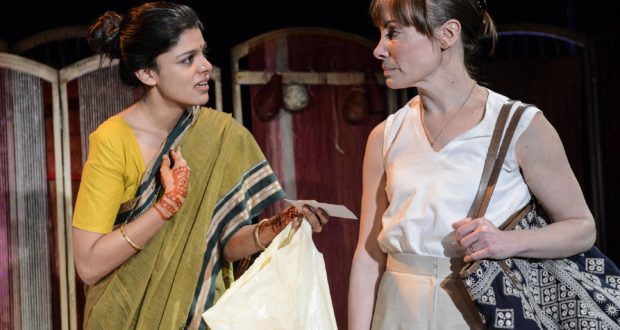 Made In India, Soho Theatre – Review

Pros: Visually stunning in its cinematic staging, exceptional performances from all three cast members. A magnificent piece of writing.

Pros: Visually stunning in its cinematic staging, exceptional performances from all three cast members. A magnificent piece of writing. Cons: Warning: Heart-break guaranteed. Satinder Kaur Chohan’s Made in India is a heart-breaking narrative exploring a complex surrogacy process. Eva (Gina Isaac), eleven years down the line of IVF and dealing with the grief of losing her husband, travels to India where the surrogacy process is, supposedly, easier and quicker than in the UK. Eva has her concerns; the play’s opening scene is a frustrating interaction between her, Dr. Gupta (Syreeta Kumar), and potential surrogate Aditi (Ulrika Krishnamurti). Eva and&hellip;

A finely honed piece of theatre that deals sensitively with a plethora of human difficulties and is delivered by the cast to a remarkable standard.

User Rating: 4.7 ( 1 votes)
Satinder Kaur Chohan’s Made in India is a heart-breaking narrative exploring a complex surrogacy process. Eva (Gina Isaac), eleven years down the line of IVF and dealing with the grief of losing her husband, travels to India where the surrogacy process is, supposedly, easier and quicker than in the UK. Eva has her concerns; the play’s opening scene is a frustrating interaction between her, Dr. Gupta (Syreeta Kumar), and potential surrogate Aditi (Ulrika Krishnamurti). Eva and Aditi battle a giant language barrier with some help, albeit very censored, from the doctor. This establishing scene appears to lay out the main ethical issues from the get-go, but the next hour is a tumultuous downward spiral with depths of complications. The story follows the three women through conception and Aditi’s pregnancy, while interweaving their efforts to use their case as an example to keep surrogacy programmes legal in India, after they are outlawed at the beginning of the play.

Made in India has an exceptionally strong cast. The engrossing nature of the play, which is partially down to a marvellous script, is reinforced by truly faultless performances. Isaac’s portrayal of Eva is utterly believable; she is so easy to watch. Her commitment to the character is outstanding, and it’s easy to forget we are watching an actress rather than a woman truthfully telling her story. Ulrika Krishnamurti constructs a tenacious character in Aditi, who is made vulnerable by circumstance but is inherently fiery in her determination to provide for her family. Her decision to be a surrogate is not one of choice, more of a last resort. The notion of privilege is handled excellently throughout, especially in demonstrating the contrast between Eva, who is struggling financially because of her unrelenting attempt to have a child, and Aditi, who is living hand-to-mouth. The women are connected by maternal instinct, and the chemistry between Isaac and Krishnamurti perfectly portrays the inherent bond between a mother, and somebody who desperately wants to be one. Kumar’s presence as Dr. Gupta, or Madamji, is aptly complicated. The play introduces the doctor as overbearing and potentially corrupt, but Kumar finds and communicates the problematic aspects of this. All three women are trying to make a living, and a life; Chohan writes believably human characters and the cast deliver their complexities with incredible depth-of-thought.

The staging of the play is equally commendable, with its vibrant aesthetic. Moveable screens woven with wool form walls, and at intervals throughout they are used for projecting colourful images. The lighting is very clever; we can’t see a lot of the scene changes because the lights and projections disguise any movement. The visual effect is something more akin to an art installation rather that a piece of drama. As we follow Aditi’s journey through her pregnancy, at each stage we see the physical change she undergoes: we watch her perform a serious of mesmeric movements as she wraps herself in the scarves which make up her baby bump. The inventive nature of the staging makes the show quite cinematic, with a clear colour scheme throughout. Made in India has all the elements of a truly great show. The story is a heart-aching, traumatic one to watch unfold, and there were many tears shed by the audience, including me. The play is a triumph of human emotion, and a very worthwhile way to spend an evening.