Home » Features and Interviews » Classic Theatre Revisited: The Absurd Becomes Immersive in ‘Ionesco/Dinner at the Smiths’’ 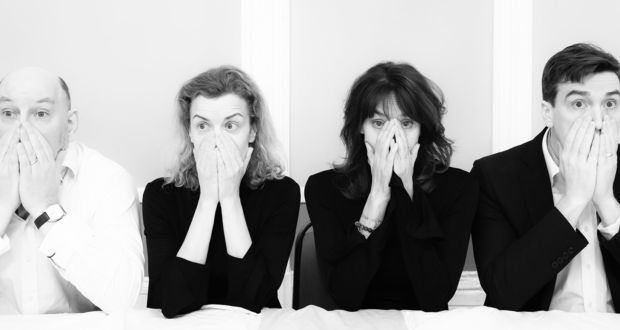 Classic Theatre Revisited: The Absurd Becomes Immersive in ‘Ionesco/Dinner at the Smiths’’

The Bald Soprano transferred to the Théâtre de la Huchette in Paris’s Quartier Latin in 1957 and has been there ever since, setting the world record for the longest-running play staged continuously in the same theatre. The play’s author, Eugène Ionesco, was arguably the most illustrious participant in the Theatre of the Absurd, writing a number of unconventional plays that include The Chairs, Rhinoceros and Exit the King. Some of the absurdist playwright’s works are now included in the immersive mash-up Ionesco/Dinner at the Smiths’, which is currently playing the Latvian House. The show is a unique blend of theatrical sequences and Ionesco’s own thoughts, presented in a groundbreaking format by French director Marianne Badrichani and the Company.

Critic Martin Esslin was the first to label ‘The Theatre of the Absurd’ in 1960, designating a group of playwrights who lived in Paris and shared a common background based on Elizabethan tragicomedy, formal experimentation, pataphysics, dadaism and surrealism. Gravitating around the small theatres of the Quartier Latin, these absurdist artists had been strongly affected by the horrors of WW2 and their work depicted the nonsensical meaning of life – which, despite the protagonists’ efforts, could never end positively. In the world imagined by the playwrights of the absurd, tragic situations were often presented under a comic light, with the hopeless characters trapped in repetitive and apparently meaningless situations from which they could not escape. Unlike Existentialism, which recommended solutions to overcome relentless failure, the Absurdist movement simply accepted this tragic fate.

Samuel Beckett’s cyclical script of Waiting for Godot – originally written in French – is one of the most popular examples of the genre. Ionesco, though, is regarded as the form’s first pioneer and main exemplar, writing his first play The Bald Soprano (La Cantatrice Chauve, in French) in 1948, four years before Godot. Ionesco was born in Romania but moved to France at the age four, spending his life between the two countries teaching French and only discovering his literary talent quite late in life. Having experienced first-hand the failures of the fascist regime and the subsequent Communist abuse in Eastern Europe, Ionesco repelled all forms of ideological conformism and developed a disgust for the tangible world. This was reflected in Ionesco’s complete disinterest for conventional theatre, which he thought lacked ‘imaginative truth’ – a trait Ionesco found significantly more entertaining than objective reality.

Another typical characteristic of the Theatre of the Absurd is its wordplay, which relies heavily on puns, cacophony and silly first names. Language was deemed unsuitable to express the human condition and became modelling clay in the playful hands of these authors, who generally used it to create grotesque misunderstandings. The absurdist writers enjoyed pushing their characters to do and say foolish things, depicting them like stylised marionettes rather than real human beings.

Within this elaborate framework, Badrichani has taken up the challenge to design a performance that preserves the original nonsensical traits of Ionesco’s plays whilst introducing some innovative elements. Refreshing the irreverent character of the Theatre of the Absurd and its ground-breaking performative approach, the piece is an 80-minute immersive mash-up of some of Ionesco’s most brilliant pieces (The Bald Soprano, The Lesson, Jacques or the Submission), intertwined with verbatim snippets of interviews with the playwright himself.

‘We call it an absurdist dinner party as the participants are invited to [sit] with strangers around a big table, received by their hosts Mr and Mrs Smith, who have forgotten about their guests’ presence,’ Badrichani explained in an interview. ‘They read the newspaper, think out loud and quarrel about nonsensical issues. The experience is also absurd because there is nothing to eat, apart from a smorgasbord of words that you may use while observing a strict etiquette.’

Ionesco/Dinner at the Smiths was first presented in 2016 as a commission from InTransit Festival of Arts, where it had to conform to the theme ‘Strange Bedfellow’. ‘This immediately reminded me of the famous scene in The Bald Soprano when husband and wife don’t recognise each other,’ continued Badrichani. ‘We decided to start researching Ionesco and we came across his TV interviews from the 50’s, which we thought were rather extraordinary.’

Ionesco first discovered the characters of Mr. and Mrs. Smith in a textbook the French-Romanian playwright used to learn English. The punctilious accounts of the couple’s daily lives caused Ionesco to reflect on the meaning of life and the importance of simple and repetitive gestures, and went on to inspire The Bald Soprano. In the play, the Smiths are having a conversation after dinner before receiving a visit from their friends the Martins. Though spectators could find their conversation banal and without purpose, Ionesco’s aim was to highlight the importance of descriptive phrases as an absolute expression of truth and the prime source of meaning for the individual.

By putting the spotlight on the man behind the words and his thoughts, Ionesco/Dinner at the Smiths guides audiences to understand the reasoning behind some of Ionesco’s most extravagant scenes whilst adding a personal perspective to a genre that strived to annihilate the human element. All the interviews are conducted in the original French and then immediately translated into English, which Badrichani says ‘brings a different layer of perception to the dialogue’. The French director goes as far as to admit that ‘the English translation often sounds funnier and more contemporary than the original text’.

Probably the biggest moment of this unforgettable experience is an enticing sequence where – still sat at the table but wearing a blindfold – the audience get their senses tickled by a gentle breeze on the face and the sound of slowly poured wine, whilst fragments of French sentences containing the sound ‘shh’ fly overhead across the room, echoed by different cast members or directly whispered in the spectators’ ears. This type of multi-sensory stimulation has been studied by some scientists for its power to produce an ‘autonomous sensory meridian response’ (ASMR), a low-grade euphoria which causes a tingling sensation on the scalp and down the upper spine.

Badrichani is already known in London’s theatre scene for her site-specific theatrical installations, such as Blue Beard at the Brompton Cemetery. With Ionesco/Dinner at the Smiths, she’s created an unparalleled production in which the classic and avant-garde converge through experimental methods that update those used by Ionesco himself. Though different in form from Ionesco’s absurdist works that came before, Badrichiani’s immersive production evokes the same destabilising – yet comic – results.

Ionesco/Dinner at the Smiths’ is currently playing at Latvian House through 1 April. Tickets and more information can be found here.