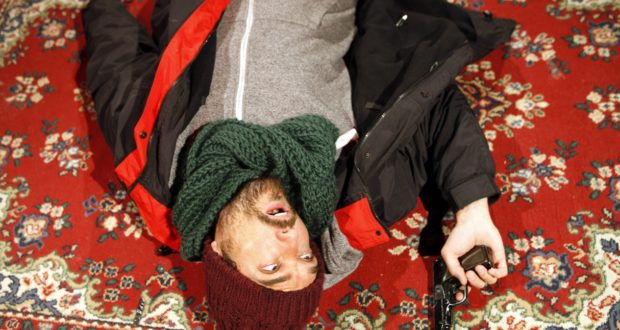 Pros: Strong actors with good comedic timing and a healthy dose of sarcasm.

Pros: Strong actors with good comedic timing and a healthy dose of sarcasm. Cons: Simple plot line meant the action of the story didn’t move as quickly as I’d have liked. Tucked away by the canal in Little Venice, just far enough away from the hustle and bustle of the city, sits the Canal Cafe Theatre; a spacious pub theatre often used for cabaret-style performances and home to the world’s longest running comedy show, NewsRevue. I had the pleasure of seeing the venue's first performance set in the round; the UK premiere of Theresa Rebeck’s The Understudy, and part of&hellip;

A charmingly funny reflection on what it’s like to ‘make it or break it’ in the world of show business.

Tucked away by the canal in Little Venice, just far enough away from the hustle and bustle of the city, sits the Canal Cafe Theatre; a spacious pub theatre often used for cabaret-style performances and home to the world’s longest running comedy show, NewsRevue.

I had the pleasure of seeing the venue’s first performance set in the round; the UK premiere of Theresa Rebeck’s The Understudy, and part of Canal Cafe Theatre’s American season. Having been a huge fan of her TV drama Smash and an admirer of her other works, I was excited to see this show.

Perfectly set in a theatre itself, our story begins with Harry (Samuel John), the newly cast understudy to one of the leads in the Broadway production of a long-lost Franz Kafka play. He shows up to his first rehearsal, despite being mistaken for the janitor, with one of the lead actors, movie star stud Jake (Leonard Sillevis) and the play’s stage manager, Roxanne (Emma Taylor). I appreciated this realistic depiction of producing a show, as once it opens all rehearsals, checks and problem-solving falls to stage management rather than the director. As the three characters try to make it through this rehearsal, fights ensue and relationship conflicts bubble to the surface, revealing that the world of show business really is a small one.

All three actors brought their own special flair to their roles. John’s quirky Harry contrasted nicely against Sillevis’ serious Jake, the conflict between the two hilarious to watch. Taylor’s Roxanne interjected energy into the piece, playing off of her fellow actors to create a strong ensemble between. Their American accents held up mostly throughout, but Taylor’s attempt at a New Yorker dipped in and out.

I thought setting the show in the round was an excellent staging decision, as we the audience really felt part of the action. All actors played out to the different view-points, so you never felt like you were missing someone’s reaction. The only distraction was some unrelated noise from the pub kitchen, but this only added further authenticity to the setting.

Rebeck’s story is interesting, honest and self-reflective; simple in its structure, but it is this simplicity that lets it down. The entire plot is centred around this one rehearsal, which although is interesting to see – what with the comedic scenes and anecdotes – it lacks action. This isn’t always an issue for a play, but in this case it seemed to slow the pace, which started out strong and fast but fizzled out towards the end. I also couldn’t help but wonder about the difference between the communication and reception of the comedy in the UK versus the US.

Overall, a great production that gives you a look inside show business. Full of excellent writing, comedy and superb actors, I had an enjoyable evening at a theatre that I’ll be sure to visit again.