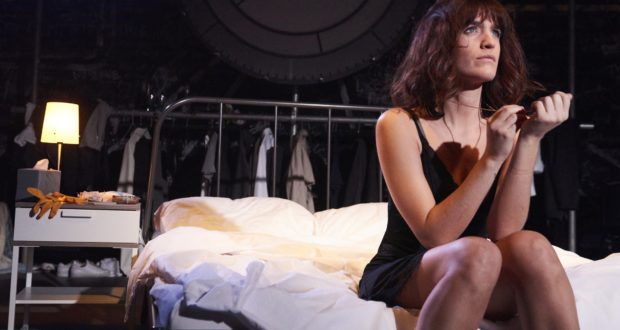 Pros: Detailed performances by an impressively skilled young cast Cons: The almost constant sexual barrage sometimes flattens the experience Single serving bottle of whiskey? Check. Sponsored condom freebie? Also check. Staring down into the contents of my opening night goodie bag I readied myself for what I hoped might be a shockingly sordid affair - all in time for a saucy Valentine’s Day opening.  A modern reworking of Schnitzler’s hundred-year-old play, Reigen, La Ronde scrutinizes sexual morals and class ideology through a series of encounters between pairs of characters. The resulting exchanges feature everything from baked bean fetishes, to&hellip;

A cleverly crafted and thought-provoking piece of theatre, featuring a playful 'randomiser' mechanism

Single serving bottle of whiskey? Check. Sponsored condom freebie? Also check. Staring down into the contents of my opening night goodie bag I readied myself for what I hoped might be a shockingly sordid affair – all in time for a saucy Valentine’s Day opening.  A modern reworking of Schnitzler’s hundred-year-old play, Reigen, La Ronde scrutinizes sexual morals and class ideology through a series of encounters between pairs of characters. The resulting exchanges feature everything from baked bean fetishes, to shiny hot pants, to a crushing session of weeping into a surgeon’s shoulder.

The set is refreshingly spartan and the muted wardrobe does well not to distract attention from the actors’ performances. Between each scene, a ‘Wheel of Fortune’-style wheel at the back of the stage is spun to decide which actor plays the next part. According to the blurb on the hand out, this means there are over three thousand different possible realisations of the play. The mechanism also serves to underline the skill of the four-strong cast in assuming each of the parts and convincingly playing out each encounter.

Performances are measured and precise. Every finger wag, pelvic thrust and wiggle of the hips is deliberate and calculated. All the more exciting when you realise that this could be the first time the actors have appeared in this scene together in those particular roles. Exchanges slide effortlessly from the hilariously absurd to the uncomfortably real, clearly rendered through the commitment of the young cast and their obvious talent. On the writing side, a sense of continuity is maintained through phrases that resurface as the different interactions are presented. Attention is paid to all three walls of the audience as actors crane their necks so that their faces can be seen.

The multiple versions of the show that could play out lend some much-needed suspense, whilst also highlighting the non-binary nature of sexual interaction; actors switch between characters and between increasingly acrobatic positions. It would be good to see more of the nuanced scenes, as in some places the constant lasciviousness has the effect of feeling just a bit flat. The unpredictability of the action and the resulting excitement is quite real as the actors really are dictated by the wheel – on opening night poor Marrett Jr. was unlucky enough not to be picked for almost the entire performance!

Each of the scenes is interspersed with verbatim testimonies of sexual encounters, collected by director Max Gill over several months in London. Some are hilariously grisly whilst others are hauntingly close. Each grounds the story, giving it a local familiarity whilst also cementing the young venue’s place in London Bridge. A memorable snippet of one of the verbatim testimonies is one individual’s admission that they are aroused by the idea of someone, rather than the reality. This attitude is reflected in one of the initial encounters, when one sexual partner is immediately turned off by the other admitting that they are a bus driver rather than a surgeon as they initially asserted. Indeed, the show’s programme goes so far as to suggest that “All sex is role-play: a performance of an identity”; an interesting interpretation that sounds alarmingly close to theatre itself.

This is a brave concept and the wheel mechanism is reason alone to come back for more. After all, you’d have to squeeze in over three thousand viewings to see every single version…