Home » Features and Interviews » Interview: Heloise Tunstall-Behrens on ‘The Swarm’ 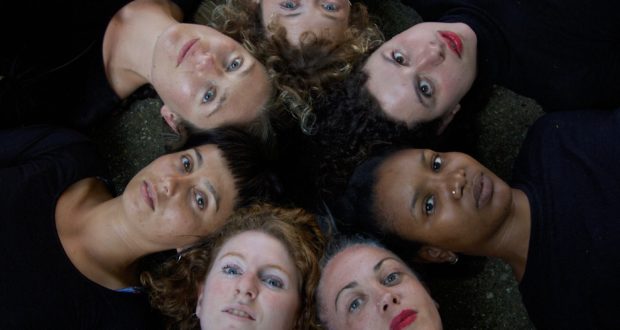 Interview: Heloise Tunstall-Behrens on ‘The Swarm’

Going from an Italian apiary to the world of immersive performance hasn’t been a huge leap for beekeeper and author Heloise Tunstall-Behrens. Together with co-director and movement designer Roswitha Gerlitz, Tunstall-Behrens is now at the Vault Festival to present her musical project The Swarm, which uses an all-female choir to reproduce the noise of a beehive, along with an urban soundscape – courtesy of musician Auclair – as a backdrop. Choral music, voice and movement merge in this avant-garde piece, which hopes to raise awareness of the endangered condition of honeybees and their importance in a city environment. The 60-minute immersive work invites audiences to connect directly with the hive by engaging in the collective decision-making process that helps bee colonies relocate. Here, Tunstall-Behrens shares her creative inspiration behind The Swarm and tells us more about her special relationship with honeybees.

How would you describe The Swarm and what was the inspiration behind its creation?
The Swarm is an immersive choral and sound art performance about a swarm of migrating honeybees in the city. The idea evolved through keeping bees and singing in a choir.

As a beekeeper, you must have a special relationship with your honeybees. How did your beekeeping work begin and when did you start seeing it as a form of art?
It’s true, I think beekeepers develop a strong tie to their hives. The bees often appear in my dreams! I started beekeeping about four years ago, after spending some time WWOOFing in Italy at an apiary. I fell in love with the deep connection to nature and the feeling of being around bees – their smell, sound and presence. It was only two years ago that I began seeing the bees as a potential collaborator for music, after listening to recordings from inside the hive. I’d put a device inside it and was so amazed by what I heard.

Can you elaborate on the immersive nature of the production? Should audiences expect to become part of the ‘swarm’ themselves?
The idea with The Swarm is to welcome the audience into the colony, for them to feel the love and connection between the bees and to feel part of that. We ask the audience to initiate the piece through their voices and, in a way, this is a chance to have a sense of themselves as a group and for the performing bees to be reassured by their support. There is something powerful about making noise together, and it’s important for the audience to be part of that!

The Swarm was first seen in Liverpool and at the Brunel Tunnel in London. How did audiences respond to the work, and has the feedback helped you to further develop the show?We were surprised by the positive response from audiences, both in Liverpool and in the Sinking Shaft of the Brunel Museum. I suppose it’s a little confusing to call the piece an opera because it is predominantly a choral work, but we wanted to challenge the form of opera by casting the main protagonist as the collective – the chorus. I think that some people came expecting operatic solos, of which there was just one by the queen. She was a narrator only at the beginning and, after that, she used to take a back seat in the story.

In the current form, we’ve replaced the operatic soloist by a recorded one, which conveys the queen as made up of many voices. She now appears in a few places throughout the piece to help with narrating the story – which was something audiences wanted more of.

Is there a particular reason why you – together with co-director and movement designer Roswitha Gerlitz – chose to take part in the Vault Festival? Do you think the unique layout of the venue can add to the experience?
Working with Roswitha was instrumental in developing the concept and form of The Swarm. She has a background in directing contemporary opera and studying the role of the chorus in it. I suppose it was our collective love of avant-garde theatre that steered our interest in setting The Swarm in an unusual venue – first the Brunel Museum and now the Waterloo Vaults. We hoped that audiences would forget the normal rules of going to the theatre and feel free to act differently. Additionally, the urban feel of the place adds to the story, which is located in the city. The soundscape, designed by Auclair, is made of recordings from the bees and from the urban environment and includes a lot of sounds from street life in Dalston. At The Vaults, when a train rumbles over the heads of the audience in real life, it’s a gamble as to whether it’s part of the performance or not!

What do you think makes this performance unforgettable? How do you think audiences will relate to and connect with the migrating bees at the production’s core?
What is outstanding about this performance is the palpable connection between the performers (the bees) and the interlocking form of the music – which is conveyed through the carefully choreographed movement. It’s a story of community, sisterhood and collective decision-making, which is a welcome counterpoint to our current environment of self-introspection and individualism. The bees need our help more than ever at the moment, and highlighting their story in a positive way will hopefully connect audiences with them.

This is not your first work inspired by the activity of a beehive – it follows the 2015 ten-minute choral piece Be The Bee. Will you keep pursuing this artistic direction and, if so, do you have any future projects in the works?
I will always be fascinated by bees and often learn something about their behaviour that blows my mind. I am interested in continuing to explore themes touched upon so far, such as the idea of collective intelligence in nature. Bees have taken me, through pollination, to the world of the plants, which I’m very interested in at the moment.

The Swarm is currently on as part of the Vault Festival until 12 February 2017. Tickets can be booked here.