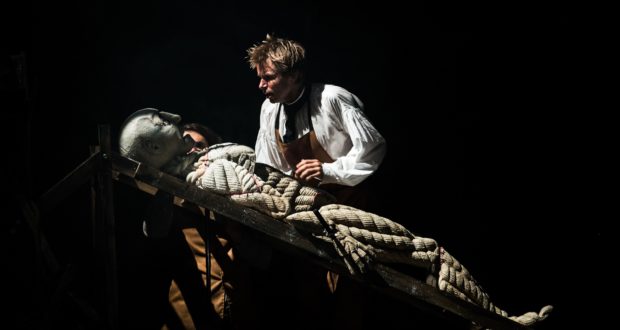 Pros: A brilliantly creative use of sound, set and puppetry.

Cons: Poor direction means that crucial scenes are skipped over and forgotten about, losing the overall message of this highly philosophical tale.
Frankenstein, Greenwich Theatre – Review

Pros: A brilliantly creative use of sound, set and puppetry. Cons: Poor direction means that crucial scenes are skipped over and forgotten about, losing the overall message of this highly philosophical tale. Say the word ‘Frankenstein’ and I’ll bet it has you thinking of Boris Karloff’s portrayal of the monster in the 1931 film version by James Whale; square headed, green and with large bolts penetrating through his neck. I too, am guilty of that! So, seeing that Mary Shelley’s classic was coming to the Greenwich Theatre for the novel’s 200th anniversary filled me with intrigue. Just how would&hellip;

There are so many excellent components to this newly adapted version of Frankenstein but unfortunately the direction lets it down.

User Rating: 3.57 ( 3 votes)
Say the word ‘Frankenstein’ and I’ll bet it has you thinking of Boris Karloff’s portrayal of the monster in the 1931 film version by James Whale; square headed, green and with large bolts penetrating through his neck. I too, am guilty of that! So, seeing that Mary Shelley’s classic was coming to the Greenwich Theatre for the novel’s 200th anniversary filled me with intrigue. Just how would Black Eyed Theatre Company recreate the horror of Dr. Frankenstein’s monster and do it justice?

Composed almost entirely of wood but for a large white sheet used as the sail, the set is a simple, yet brilliant creation that forms the outline of Robert Walton’s ship and other important backdrops throughout the play. It is on this ship that we first meet Frankenstein, an eccentric, young scientist in desperate search to find the answers to some of life’s greatest questions.

The story is lengthy and if you know the plot, quite complex, making the job of cramming everything into just 90 minutes an almost impossible task for writer John Ginman and director Eliot Giuralarocca; but it is here where the mistake lies. The production focuses so much on getting every detail of the story told that it sacrifices the emotional connection that the actors have with the tale. Key scenes are rushed through and forgotten in order to ensure a 9:30pm finish. Though Ben Warwick as Frankenstein should be commended for his efforts, there is little emotion in his performance, which I put not down to the actor but the direction. Major scenes are whizzed through making it incredibly difficult for anyone unfamiliar with the message of the story to follow. The deaths of Henry Clerval and William, Frankenstein’s best friend and brother, were so lacking in any kind of feeling that it became too easy to switch off.

Max Gallagher, playing the roles of Clerval and the professor, does well at injecting some much-needed comedy into this hardy tale, but it is Frankenstein’s creation himself who steals the show. Director Giuralarocca has chosen to bring Shelley’s famous monster to life using a 6ft tall puppet made up of rope and foam. Slightly sceptical of the idea at first, Louis Labovitch does a phenomenal job of voicing the monster and controlling his every move. It doesn’t take long before you have forgotten all about Labovitch and are looking deep into the puppet’s eyes, listening to his sorrowful quest for love. There are some genuinely moving moments and you can’t help telling yourself that you’d befriend him, even if no one else would. Choreography is absolutely on point, from him kneeling to taking a breath – it is brilliant to watch, and you will be surprised how much empathy you can feel for an oversized puppet.

Another point of excellence in this production is the use of live sound. Shared between the whole cast, different instruments are played throughout to create the sound effects of the sea, electricity and other such noises. It is particularly good when tubing is used to create the bubbling sound of the chemicals in Victor Frankenstein’s laboratory.

There are many great things about this production but unfortunately it is the performances that let it down. The famous ‘IT’S ALIVE’ scene is so underplayed it is very easy to miss, which was a huge disappointment for me. For a story that relies so heavily on the theme of emotion, it seems ironic for that to be missing from the play. Perhaps with some tweaks from the director and some time added onto the performance, this would help create a better connection with the meaning of the story.

There are however some wonderfully creative ideas included and if you are a fan of puppets, I’d recommend popping along just to see him – he’s definitely worth a look.