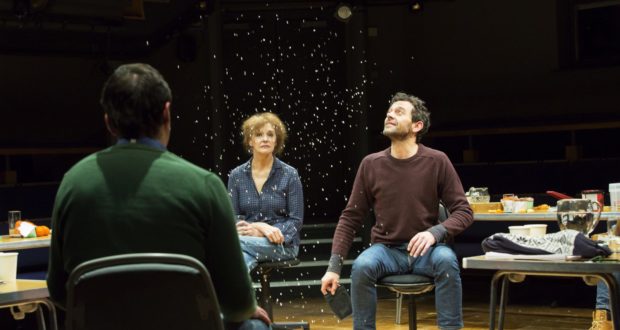 Pros: This play is truly pacey. At over two hours it doesn’t slack.

Cons: The subtle metaphor gets a little lost in amongst the clever staging and noisy script.
Winter Solstice, Orange Tree Theatre – Review

Pros: This play is truly pacey. At over two hours it doesn't slack. Cons: The subtle metaphor gets a little lost in amongst the clever staging and noisy script. It's not a secret that Roland Schimmelpfennig's comic play Winter Solstice touches on fascism. It's clearly discussed if you visit the Orange Tree Theatre's website or read the literature available pre-show. And it was useful to have seen this information prior to my visit, as without that knowledge I'm not sure I would have understood fully the two hours that followed. On the surface, Winter Solstice is a simple thing. A family&hellip;

It’s not a secret that Roland Schimmelpfennig’s comic play Winter Solstice touches on fascism. It’s clearly discussed if you visit the Orange Tree Theatre’s website or read the literature available pre-show. And it was useful to have seen this information prior to my visit, as without that knowledge I’m not sure I would have understood fully the two hours that followed.

On the surface, Winter Solstice is a simple thing. A family gathering on Christmas Eve, with all its awkwardness. There is the mother who is not particularly welcome for the festive period; the unhappy husband and wife, each guarding their own secrets; and in their midst is the mysterious man who arrives unannounced, having met the mother on the train that afternoon. Of course, beyond the superficial roles of the characters there is more at hand, and beneath the surface this play clearly has depth. This comes through in both the highly interesting staging, and the aforementioned undertones of fascism that it aims to examine.

The production’s staging is certainly different (for this theatre goer anyway). The text plays out in one single scene, so it’s non-stop for almost two hours. Quite a feat for all five actors involved, each present on stage for the entire length. Adding further to the infrequently adopted dramatic structure, the actors direct proceedings as well as well as perform them. Dialogue between actors is interrupted as other members of the cast speak out scene descriptions or thoughts on what is happening. I describe it as interesting, others may say clever, whilst some might say tiresome, unnecessary, or simply irritating.

Beyond this unusual cacophony of voices on stage there is little in the way of scenery. Instead, all five performers are seated around trestle tables covered in a variety of items that could just as easily make up a primary school’s toolbox for kids. These objects are transformed in performance; a crayon becoming a cigarette, a glue stick a lipstick. Best of all is the construction of the Christmas tree, made up of a host of random items.

And somewhere in amongst this is a metaphor. We are encouraged to see the mysterious stranger as a representation of the fascism at the heart of this play. He is charming and mysterious, something old dressed up as something new, selling himself to a family that wants something different. Yes, it’s fascism but it could just as easily be Brexit. Again, some might describe this as clever and interesting, or it could just be a little too clever for its own good. The metaphor is so deeply rooted you could miss it had you not read the instruction manual provided by the marketing department in various guises.

This then is my problem with Winter Solstice; in actual performance the strongly advertised raison d’être of the play isn’t so strong. The play simmers but never boils over. As someone who likes their theatre contemporary and socially aware this should have been for me. However, it slightly disappointed in that it took the best part of nearly two hours to get to the point, and then it did so in a flash.  Others may delight in the absolutely unique approach taken to the play’s construction. This play is good, just not my cup of tea.