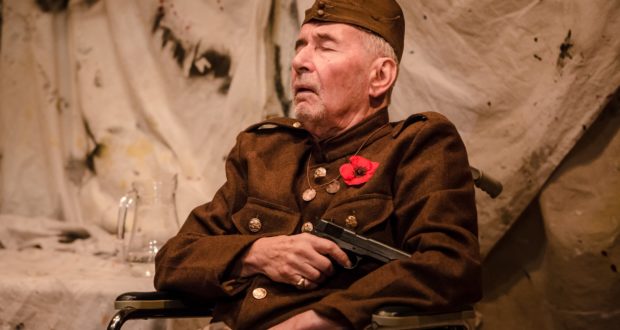 Cons: The theatre was very hot. The play suffers slightly from wearing another production’s clothes, and could maybe do more with a larger budget. Has an American directness that may lack subtlety to some.
Veterans Day, Finborough Theatre – Review

Pros: An engaging, visceral and aggressive play with contemporary relevance. Strong themes, tackled with sensitivity and intelligence by very capable actors. Cons: The theatre was very hot. The play suffers slightly from wearing another production's clothes, and could maybe do more with a larger budget. Has an American directness that may lack subtlety to some. Veterans Day is an excellent play that everyone should see. What’s that? You want more context? Well, OK then. This was my first visit to the Finborough Theatre. After braving strikes, the district line and the demon of inclement weather, I found myself in&hellip;

An excellent play that's worth braving a tube strike for.

User Rating: Be the first one !
Veterans Day is an excellent play that everyone should see. What’s that? You want more context? Well, OK then. This was my first visit to the Finborough Theatre. After braving strikes, the district line and the demon of inclement weather, I found myself in a charming pub. Friendly staff directed me to a cosy auditorium and I settled in for an evening of theatre. It’s an intimate space and heats up quickly, so ensure you can take off layers without causing offence.

Veterans Day is performed over the set of The Trackers of Oxyrhynchus (already reviewed by my esteemed colleagues at ET) but it fits its temporary home like a freshly pressed uniform. The action takes place in 1989, in a Veteran’s Administration Hospital. Three veterans, of different wars, wait in an impromptu green room to be honoured for their service. Pt. Leslie R. Holloway (Roger Braban) a veteran of the Great War, is wheelchair-bound and seemingly unaware of present-day events. Sgt. John MacCormick Butts (Craig Pinder) saw action in the Pacific during World War Two, whilst Col. Walter Kercelik (Charlie De Bromhead) was a poster boy for the US Army during the Vietnam War. Each man bears the weight of his experience. The way this manifests varies markedly. Far more compelling than what we see and hear are the brief glimpses behind the eyes of these individuals. Masks slip and demons are exposed.

The costumes are effective. Holloway in his uniform, maintained but still somehow forgotten. Butts, every inch the manic used-car salesman, in a shabby suit with a military cap to add context. Then Kercilik, entering in a crisp uniform and slowly adding layers to the facade even as his own crumbles. Military songs intersperse the play, linking the shared experience of the disparate characters. Even the truth of these can’t avoid exposure.

The deepest notes of the acting are so subtle as to be easily overlooked. The impact of Braban’s presence is living proof that lines are often superfluous to acting. I initially thought Pinders’ performance forced, but as the play progressed so did my understanding. His character exists on a knife edge of mental balance. Each moment of forced joviality belies the terror of a successful man forced to look behind the curtain. De Bromhead has complete ownership of his character. His Kercelik is warrior, poet, philosopher and eulogist in equal measure. It is quite possible to believe him as a man ‘two hundred years old inside.’

This production squeezes every potential moment of drama from the script. It left me thoughtful and emotional. It reinforced the power of theatre. To my mind, it’s ripe for a transfer.