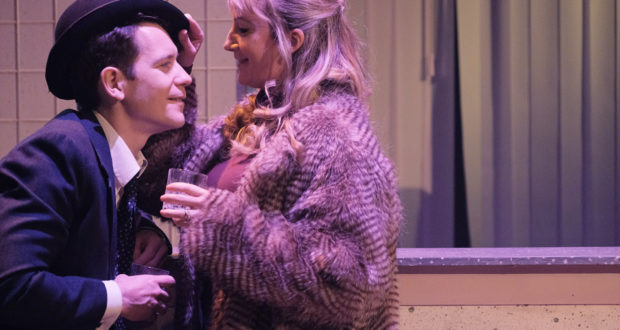 Pros: Some good performances. Cons: Musically disappointing, overlong and just not that funny. Sexual intercourse began in 1963, and if Promises, Promises is anything to go by, I’m glad I wasn’t there! The show is a revival of the sixties musical that was itself based on Billy Wilder’s film The Apartment. Featuring music by Burt Bacharach, lyrics by Hal David and a book by Neil Simon, it has impeccable pedigree but not so much class. Our hero is Chuck, a naïve young accountant who’s eager to climb the greasy pole at Consolidated Life Insurance. He has his own small&hellip;

Boasts a crassness that is unmitigated by its entertainment value.

User Rating: Be the first one !
Sexual intercourse began in 1963, and if Promises, Promises is anything to go by, I’m glad I wasn’t there! The show is a revival of the sixties musical that was itself based on Billy Wilder’s film The Apartment. Featuring music by Burt Bacharach, lyrics by Hal David and a book by Neil Simon, it has impeccable pedigree but not so much class.

Our hero is Chuck, a naïve young accountant who’s eager to climb the greasy pole at Consolidated Life Insurance. He has his own small apartment and a soft spot for Fran in the cafeteria. Trouble begins when a company executive finds out about that small apartment and offers Chuck the chance of promotion, in return for use of the apartment with his lady friend. As word spreads through the Executive Dining Room, Chuck’s home is taken over more evenings than not, by a cabal of paunchy, gropey, disgustingly desperate middle-aged men and their various bits on the side.

Where costume, design and choreography are concerned, the production pays reverent homage to the 1960s, from Miss Olson’s horn-rims to the typeface on the menu, from the adding machine to some classic dance moves. Casting Director Jane Deitch has even managed to find two leads who are ringers for Jack Lemmon and Shirley MacLaine.

The production is equally diligent in recreating what were apparently the attitudes and mores of the sixties. Perhaps that’s to its non-revisionist credit, but it doesn’t make for enjoyable watching. Phrases like ‘I’ll take her off your hands’, or the one-dimensional, sleaze bag middle-managers and mute, acquiescent dolly-birds are a mere warm up for the scene where a drunken couple cavort comedically in the same room where a girl lies dying of an overdose. Or the scene where said unfortunate girl is exhorted by a couple of singing clowns to smile more, as a remedy for her suicidal thoughts. No doubt this is prudish presentism on my part, but it’s no different from accepting that revenge tragedy was a product of its age without always enjoying the spectacle of it. (Though I refuse to believe that suicide jokes were funny, even in the sixties.)

The show might have redeemed itself, even with this old prude, if it had some banging tunes; there’s no shortage in the Bacharach/David songbook. Sadly they don’t feature here. With the honourable exception of I’ll Never Fall In Love Again, which pops up in a fairly unadulterated form right at the end, everything else is lyrically laboured and entirely unhummable.  The Christmas party song Turkey Lurkey is just headache-inducingly bizarre. This is all a great shame because there are some talented vocalists in the cast; Daisy Maywood, as Fran, sings sorrow beautifully, but is even more impressive when singing rage and self-loathing, while Gabriel Vick brings versatility and a winning charm to the role of Chuck.

In the middle of this bleak pastiche, there is one scene with heart. Drunk and disappointed, Chuck stops by a bar where he meets brassy barfly, Marge. Marge is as much a stereotype as any of the other characters, but has some of the best lines in the show.  Alex Young plays her with spontaneity, sex appeal and a roguish charm. For just a few minutes the laughs come thick and fast, we see a real rapport between two characters and it feels like we’re watching a sexual pursuit that is timeless, healthy and finely balanced.

It’s not a massive spoiler to say that Chuck does finally get his girl. With the cynicism of 50 years’ hindsight, I predict it’ll never last; they have nothing more in common than basketball. Give it a few years and she’ll be examining her chakra in San Francisco while he mows the lawn in middle America.