You can use WP menu builder to build menus
Home » Reviews » Comedy » Bitches Ahoy!, Above The Stag Theatre — Review 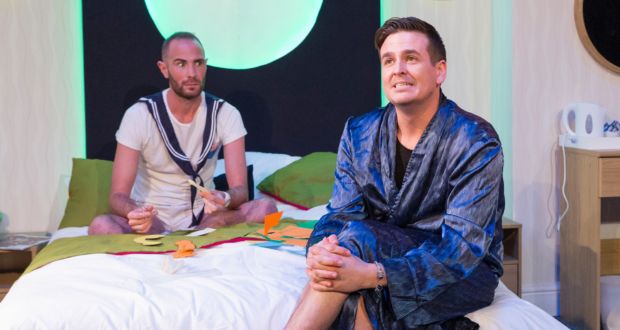 Pros: A night of pure entertainment.

Pros: A night of pure entertainment. Cons: You may want to stay at Above The Stag and never go back home. When I saw the name of the performance I was going to watch, I had the highest expectations. I hoped I would laugh myself to tears and have the most joyous night. Luckily, that is exactly what happened. Bitches Ahoy! welcomes you aboard a gay cruise and introduces you to (or, if you saw Alright Bitches!, reunites you with) five characters that are bound to make you laugh. As you enter the intimate stage space you immediately step&hellip;

Comedy in its purest form, but also an important and real piece to be exposed to.

When I saw the name of the performance I was going to watch, I had the highest expectations. I hoped I would laugh myself to tears and have the most joyous night. Luckily, that is exactly what happened.

Bitches Ahoy! welcomes you aboard a gay cruise and introduces you to (or, if you saw Alright Bitches!, reunites you with) five characters that are bound to make you laugh. As you enter the intimate stage space you immediately step inside one of the cruise cabins, and as soon as the show starts you meet Pam, one of the few women on the ship. Her best friend Max organises for her and her new French beau Patrice to get on board for a special price and enjoy what the Mediterranean has to offer. Joined by their other best friend Garth and his boyfriend Drew, the five of them introduce you to a story that you could only wish you were a part of.

Problems and stories are brought to life by the talented cast of Lucas Livesey as Max, Hannah Vesty as Pam, Ethan Chapples as Garth, Simon Burr as Patrice and Chris Clynes as Drew; five actors that prove that if you thoroughly enjoy what you are doing, your passion for theatre will show in your impeccable performance.

There was not a silent moment after one of Max’s blunt one-liners; you wished you could be sipping bubbly with Pam, talking about art with Drew, and having heart-to-heart conversations with Garth after a Cher-themed party.

Martin Blackburn has written a piece that achieves what it sets out to achieve — pure entertainment through wonderful comedy that is so raw and real you can picture yourself going on a cruise with the cast!

Above The Stag Theatre is situated under a railway arch, so it has the potential for a lot of disruption. Luckily the performance allows you to have the most fun night you will have in a while, so not even the passing trains could be a distraction.

The staff at the theatre welcomed everyone aboard with some drinks and snacks and the most genuine smiles. I had a chat with a few of the members after the show and, let me tell you, I am definitely going back and I may never leave!

As the UK’s only full-time professional LGBT theatre, Above The Stag hosts productions that are hilarious, entertaining, raw and very important. It receives no subsidies from the Arts Council, but it continues to thrive on its amazing members’ donations, and the support and love can be felt immediately as you walk inside the venue.

It is of utmost importance to have a professional LGBT theatre that exposes us to stories that bring laughter, tears and so much love to their audiences. Become a member, make a donation or try to grab tickets to one of their shows — Bitches Ahoy! has a few dates left that are not sold out, so hurry up and book! You will absolutely not regret it.