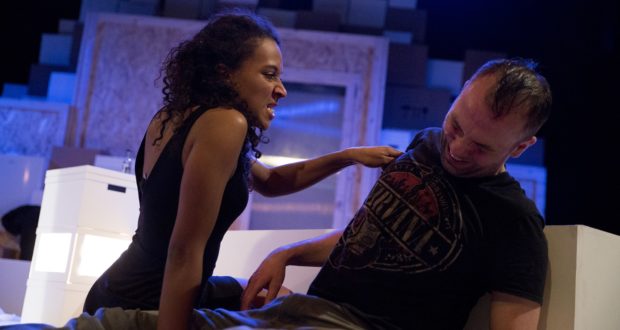 Pros: An intimate look at an unconventional couple reveals the darker underbelly of who pulls the strings in a relationship.

Cons: Thinly sketched characters and their erratic motivations mar the intrigue of the piece.
Abigail, The Bunker – Review

Pros: An intimate look at an unconventional couple reveals the darker underbelly of who pulls the strings in a relationship. Cons: Thinly sketched characters and their erratic motivations mar the intrigue of the piece. Who is Abigail, really? Her name is never spoken throughout this hour-long play, but it hangs in the air like a gift and a curse. Abigail pieces together the relationship between a 20-something young Woman (Tia Bannon) and a 40-something older Man (Mark Rose), both unnamed. There’s an echo of Daphne du Maurier’s Rebecca (1938) here, the similarly mononymous novel where a naive younger woman&hellip;

A good watch if you’re disillusioned about romantic relationships and want to feel validated about that breakup you just went through.

User Rating: Be the first one !
Who is Abigail, really? Her name is never spoken throughout this hour-long play, but it hangs in the air like a gift and a curse. Abigail pieces together the relationship between a 20-something young Woman (Tia Bannon) and a 40-something older Man (Mark Rose), both unnamed. There’s an echo of Daphne du Maurier’s Rebecca (1938) here, the similarly mononymous novel where a naive younger woman is quickly enchanted by an older man when they meet on holiday. But this is where the contemporary homage ends. This time, it’s the Man who’s enchanted by a nubile young thing, but whose romantic ideals will soon be dashed. And the ghost that haunts this play’s relationship isn’t a female paragon of perfection, but an Oedipal shadow from the Woman’s past.

Abigail feels like the darker, more angsty foil to Jason Robert Brown’s musical The Last Five Years, where a sense of optimism tends to linger even if we know the relationship doesn’t. As the timelines of the two lovers in the musical converge and then unspool, there’s still a latent cheerfulness as one half of the duo gazes, rosy-eyed, at all the love waiting for her in the future. There’s no such hopefulness in Abigail, where, to quote one of the characters, it’s ‘one or two months of nice stuff followed by ten months of shit’.

Playwright Fiona Doyle presents a fractured series of vignettes from different moments in the couple’s time together, leaping back and forth from the wake of a bitter argument, to a chance first encounter at an airport, to a vacation taken together abroad. There are some frank, refreshing discussions about relationships and some amusingly authentic moments of awkwardness, but these tend to get washed out. The Woman evolves rapidly from the Pixie to the Manic of a Manic Pixie Dream Girl, and this transformation wipes out any sharp observations that might have been drawn about a couple struggling to make a relationship work (or deliberately sabotaging it). The temporality of this relationship is also evoked through the set, a veritable mountain of makeshift cardboard boxes, with symbols for fragile objects printed on the sides, and a suitcase in a corner. Throughout the course of the play, the set is increasingly littered with clothing, a beer bottle or two, and the detritus of emotional baggage strewn across the stage.

We aren’t sure who Abigail is, but Abigail doesn’t seem too sure about what it is, either. If it’s meant to be a close study of a relationship falling apart at the seams, the shifting timeline of the storytelling means that there are a lot of large gaps – some of which work in giving the play a sense of intrigue and unpredictability; others mean that we are left with a lot of gaping holes as to the characters’ motivations and intentions. Bannon and Rose do their best with what they’re given, with Rose turning in a sturdy, believable performance as a man first entranced, then quickly disillusioned as what once was a spark of magic turns into the ashes of frustration and denial. Or is Abigail meant to be a study of one woman’s dark streak that poisons a promising relationship? There are strange, unresolved hints of a larger mystery at play here that may very well be red herrings, thrown out as quickly as the play ends. The couple’s age gap is hinted at, but never interrogated, in what I felt was a lost opportunity.

The weather cooperated marvellously the night I watched this play in The Bunker’s subterranean space – a night where miserable sleet pelted London and dark, glittering ice covered the streets. In one scene, the couple sits at a lookout point on a mountain and are disappointed by the thick fog covering what was supposed to be a sumptuous, ‘bucket-list’ view. They then pick up a spray of buttercups, where the Man points out that the beautiful buds are poisonous. In Abigail, like Rebecca, one thing is for certain: what is beautiful might just kill you – or, worse still, disappoint you.

Corrie is a recovering arts journalist from Singapore. She collects languages, theatre programmes, and stories that need to be told.