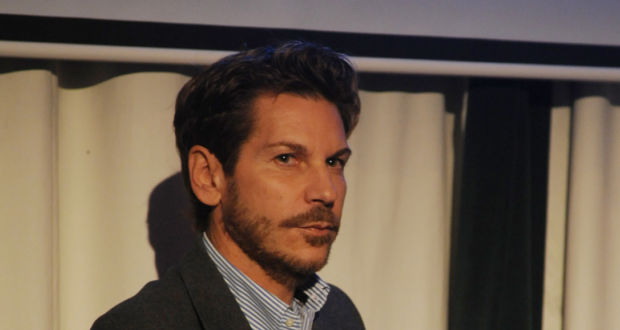 Celebrated Italian cinema and theatre director Marco Filiberti arrived in London on 18 November for the first time, appearing in a discussion and screening at the Italian Cultural Institute. In response to the evening’s events, Marianna Meloni describes Filiberti’s work and draws on her Italian and English background to consider the famed director’s own ambitions on the London stage.

With a glamorous reception organised by the Italian Cultural Institute London, theatre and cinema director Marco Filiberti was in the English capital to talk about his views and present his latest film Cain to the British public. Born and raised in Milan, Filiberti began his award-winning artistic career in the 1990s. In the last decade, his work has been seen in Europe, the United States and Canada and as a part of prestigious film festivals in Berlin, Venice and Los Angeles. For Cain, Filiberti’s third feature film, the filmmaker has used the one-act play Conversation Pieces as its backbone, which is Filiberti’s own rewriting of Lord Byron’s dramas Manfred and Cain.

Set after dark within the gentle backdrop of the Tuscan countryside, Conversation Pieces stands out for its rustic scenery laid on the edge of an artificial pond and for deeply evocative visuals that recall the Romantic preponderance of natural forces and a supernatural halo of neo-Gothic origins. Typical of Filiberti, as well as other Italian directors, is a tendency to create ‘tableaux vivants’ – living compositions of props and bodies that linger against a carefully chosen background, in order to recreate a motionless scene that belongs to the popular imagery.

Cain, meanwhile, follows a group of actors retreated in the mansion of a prestigious theatre director to rehearse a new production of Lord Byron’s Manfred and Cain. Soon, amongst the cast, the obnoxious and arrogant Antonio emerges, before his acting flair is suddenly overshadowed by the arrival of the talented and charismatic Amedeo. The plot unravels in a continuous alternation of stage fiction and reality, which increases gradually in its pace towards an unpredictable breaking point. The result is an audio-visually striking film where the depth of Byron’s original text is hardly matched by a simplified story line, and risks becoming an empty shell for the gripping pre-recorded play.

In conversation with the Institute’s director Marco Delogu, Filiberti highlighted his affinity for Byron and the other great masters of English Romanticism, in particular Keats and Shelley. His exploration of the Romantic theme of ‘ruinism’ – intended as the impulse of our modern civilization to head towards self-destruction – is reflected in his work by the use of rural settings and wrecked buildings, which nature forcefully tears off the human hand. In a similar pattern, his main characters – both on stage and on film – seem completely incapable of controlling their self-destructive urges and feral instincts.

Feeling such a strong connection with the English literary heritage, Filiberti has repeatedly expressed the desire to bring his trilogy Il Pianto delle Muse (The Lament of the Muses) to a London stage. The trilogy — described as an ‘apocalyptic trilogy representing the world’ — is composed of three plays: Conversation Pieces, Byron’s Ruins and The Dusk of Arcadia. Together, the three works investigate the spiritual, anthropological, artistic and aesthetic degradation caused by modernity since the nineteenth century.

This brave operation of cultural transposition, however, might encounter some serious obstacles. As an Italian who has spent the last decade in London, my first thought is the divergent roles that theatre assumes within Italian and English societies (though this perhaps runs the risk of overgeneralisation).

Attending a theatrical performance In Italy – with the exclusion of large scale stand-up comedy – is generally considered an activity for highly educated patrons, and theatre-makers are often privileged individuals with an intellectual scope. In the last few decades, Italian productions have suffered from an increasing and severe marginalisation, even in big cities, with many professional actors struggling to maintain a steady occupation. According to the Italian National Institute of Statistics, in the year 2015, only an average 20% of the population went to the theatre at least once.

The English tradition, on the other hand, is far more closely connected to the performing arts, which are impressively prolific not only in London, but also in smaller cities. Theatres, pop-up spaces, site-specific shows and all sorts of live events represent an essential part of England’s cultural participation, regardless of the level of education or sector of employment of whomever takes part. A report commissioned by the Arts Council identified that 52% of the population attended the theatre in 2014, with the lowest participation rate, measured in the East and Northwest, still comprised of 30% of the population.

Given this premise, the biggest hurdle for Filiberti’s London ambitions could be the very nature of his plays, which are strongly rooted in the classical culture and might not necessarily appeal to the English taste. I could make an analogy to a recent staging of No’s Knife at the Old Vic, where an outstanding Lisa Dwan gave voice to a selection of Samuel Beckett’s most introspective writing. Despite the intellectual resonance of the initiative, the critics were noticeably divided between those who recognised its cultural value and those who pointed out the limitations of a text not originally intended for the stage. In other words, whereas some might enjoy a richly referential script, many others could struggle to engage with a cryptic collection of unfamiliar elements.

Perhaps the same Old Vic – which was once territory of the great Italian director Franco Zeffirelli – would be willing once again to embark in this intercultural challenge and help Marco Filiberti to find the right audience and the appreciation that his trilogy deserves.