Home » Opinions » The Evening Standard Theatre Awards 2016 — ET Was There! 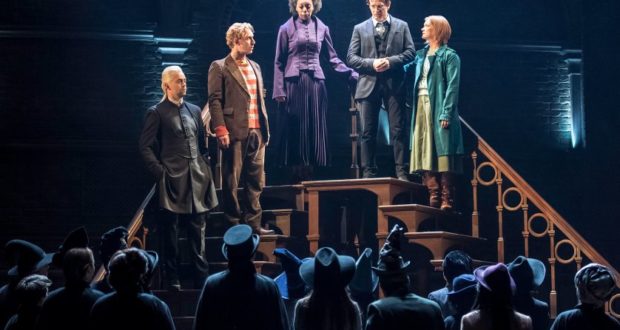 The Evening Standard Theatre Awards 2016 — ET Was There!

On 13 November, the London theatre community joined together to celebrate this year in theatre at the Evening Standard Theatre Awards, and amongst the glitz and glamour was Everything Theatre’s own Neil Johnson. Here, Neil offers his own first-person account of his experience at this high-profile theatre event.

Ever since I used to put on one-man shows for my family, aged 4, theatre has been in my blood. From opening night nerves to a rapturous curtain call, there’s nothing quite like the emotion of theatre. So being invited to review the 62nd London Evening Standard Theatre Awards was definitely one of the biggest highlights of this retired actor’s year. Donning my penguin suit and dusted dicky bow, I made my way up the red carpet of the ceremony at London’s Old Vic Theatre. Imagine, if you will, Norma Desmond arriving at Paramount Studios. The glitz and glamour was off the charts.

I was met by the wonderful event crew and, while catching a glimpse of Tom Hiddleston walking in behind me, I was ushered to the downstairs theatre bar for some pre-ceremony drinks. I had the delight of meeting some other journalists and critics and, while sipping bottomless champagne, we all talked the business of show and this year’s raft of superb nominees. The bar was situated by the downstairs loo, so in between guessing this year’s potential winners, I found myself constantly bumping into them. Glenn Close, Lord Andrew Lloyd Webber, Dame Maggie Smith, Billie Piper and even John Malkovich – all popped down to spend a penny before the festivities started. Other guests for the evening included Mark Rylance, James McAvoy, Dominic Cooper, Salma Hayek, John Malkovich, Ian McKellen, Orlando Bloom, Sir Michael Gambon, Helen McCrory, Dame Joan Collins, Dominic Cooper, Kristin Scott Thomas, Dame Eileen Atkins, and Sir Patrick and Lady Stewart. Standing in and amongst such incredible theatre royalty was beyond magical for this West End Wendy.

The Old Vic is one of my favourite theatres in the capital, and as we took our seats in the royal circle and looked down at both the stage and candlelit dining guests, the atmosphere was electric. This year’s ceremony was presented by the incomparable Rob Brydon, whose comic timing throughout the night was genius. Brydon was relaxed, hilarious and on point.  Thirteen awards recognising excellence in theatre and beyond over the last year were given out, with the first award, the Beyond Theatre Award, presented by none other than HRH Duke Of Cambridge. The Duke went on to describe this year’s recipient as ‘someone who has shaped our country’s culture and changed the way we look at the world’: Sir David Attenborough. As Attenborough walked onstage to collect his award for his outstanding contribution to broadcasting, we all gave him a standing ovation and he was clearly moved as he struggled to speak over our euphoric applause.

The two shoo-ins for awards, for me, were Billie Piper and Glenn Close. Billie was named Best Actress for her gut-wrenching and powerful performance in Yerma, triumphing over Noma Dumezweni, Helen McCrory and Sophie Melville, who were all shortlisted for the award presented in memory of the late Natasha Richardson. The fabulous Glenn Close deservedly won Best Musical Performance for her tour-de-force portrayal of Norma Desmond in the ENO’s spring production of Sunset Boulevard. Close was so good in this musical that I saw it twice, so I was beyond thrilled that she won and will be reprising the role on Broadway in 2017.

The dashing Ralph Fiennes won Best Actor for both The Master Builder and Richard III, despite stiff competition from Ian McKellen, Kenneth Branagh, James McArdle and O-T Fagbenle. Fiennes is a superb actor and the work done by The Almedia is brilliant – though a little part of me wished that Sir Ian McKellen won for his role in No Mans Land. I recently saw a matinee performance at The Wyndham and thought McKellen was heart breakingly good, so I was pleased that the show went on to win Best Revival.

A definite highlight of the night, of which there were many, had to be McKellen suddenly walking through the audience as a camp panto dame. Oh yes! Sir Ian and Sir Patrick dumped Pinter for a night and, through some hilarious anecdotes and improv (I’m presuming?), provided some light comic relief that resulted in another standing ovation. The second highlight had to be Glee star Amber Riley’s performance of ‘And I am Telling You’ from the upcoming production of Dreamgirls at the Savoy. One of Riley’s co-stars in the show, Tyrone Huntley, was presented with the Emerging Talent Award for his earlier role in Jesus Christ Superstar, which also went on to win the Evening Standard Radio 2 Audience Award for Best Musical. In his acceptance speech, Lloyd Webber pointed out that it had taken his show 45 years to win its first major award and also had a personal message to PM Theresa May: ‘Can I passionately beg you to believe you must stop cutting the arts in schools.’

Harry Potter and the Cursed Child won one of the three awards it was shortlisted for, with co-writers Jack Thorne, JK Rowling and John Tiffany picking up the award for Best Play. If, like me, you’re part of the many millions still clambering for a ticket to see this sought-after production, you’ll be pleased to know we were given a short video clip showing parts of the play and it looks beyond magical.

Sir Kenneth Branagh was the recipient of this year’s Lebedev Award for his Garrick season and accepted the award with an emotive speech, in which he thanked the Evening Standard for sending a reviewer to his first-ever show 33 years ago. Thanks to their good review the show sold out and was seen by the RSC, who offered Branagh a job – and the rest is history. The Editors’ Award was given to two fantastic British playwrights: Joe Murphy and Joe Robertson, who co-founded the Good Chance Theatre in Calais. Presented by Academy Award Winner and West End legend Mark Rylance, who praised the lads for being  ‘a beacon of hope’, the two Joes were incredibly moved as we rose to our feet once more. Rylance continued: ‘In these dark times when hate and fear of each other seems to be becoming government policy, the Good Chance Theatre — in reaching out to the most vulnerable and in celebrating the dignity of every human being regardless of race, age or gender — represents the very best of us.’

All in all, this year’s awards were an incredible night of high drama and praise for the very best our capital and country has to offer. With both Hamilton and Gary Barlow’s sold out Finding Neverland all coming to the West End next year, 2017 is set to be yet another fantastic and strong year for theatre.

The winners of the thirteen awards for the 62nd London Evening Standard Theatre Awards are as follows:

BEYOND THEATRE
Sir David Attenborough
For his contribution to broadcasting

LEBEDEV AWARD
Sir Kenneth Branagh
For his Plays at the Garrick