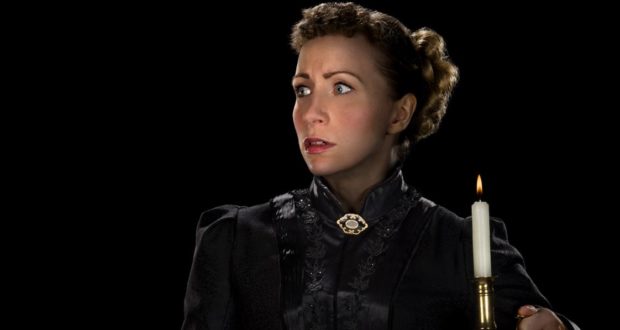 Since 2009, Dyad Productions has been committed to offering a new show every year and, so far, has toured the UK, Ireland, Germany, the USA, Australia and New Zealand. Striking a perfect balance between high production values and a minimal cast of one or two actors, the company takes pride in giving a voice to the unheard characters of literature, history and current civilisation. Here, Producer, writer and performer Rebecca Vaughan introduces the upcoming London performance of Christmas Gothic at artsdepot and reveals what makes the gothic genre so special and appropriate for the festive season — as well as plenty of other London dates to look forward to in 2017.

Dyad Productions has been touring the UK and abroad since 2009. How would you describe the company’s mission and accomplishments?
We’re very passionate about literature and history and love finding ways of being radical (in the original sense of the word) and going back to the root of what they are – and showing this to an audience.  We’re also really interested in the solo show format and seeing what we can do with it.  We now have eight shows on tour (seven solo shows and one two-hander) and create one new piece of work each year.  This means that we’ve built up a wonderful following of audience members who expect us to be touring new work every year. Thanks to social media, we can really get to know our audience and keep regularly in contact with them.  We’ve also been very lucky to tour the US, Australia, New Zealand and recently we had a premiere in Germany too!

Despite its nomadic nature, the company takes pride in offering high production values. How do you strike a balance between flexibility and quality?
We are committed to high production values and pride ourselves on our lighting plots, soundscapes and bespoke costumes.  But we keep the production ‘tourable’ (in the solo show format), which means that we can offer these shows, even for one night only, in regional venues across the UK and Ireland.

Your productions have a predominance of strong female figures, coming mainly from the historical and literary tradition. Jane Eyre, Elizabeth I, Clarissa Dalloway and Marilyn Monroe are just some of the characters present in your repertoire. Is there a particular thread linking all of them that attracts you to these roles?
We’re fascinated by women whose voices have either been lost or misrepresented, in both literature and history – and indeed in our current civilisation. We’ve also planned some shows about male characters. Dyad Productions is interested in the ‘everyperson’ and how it has been silenced or diminished through society’s subjugation, in whatever form.

Currently, you’re touring the UK with Christmas Gothic – which will be in London on 8th December at artsdepot. Can you tell us more about this show and what gave you the inspiration to write it?
In 2012 we had created the show Female Gothic, which went down a treat with both the critics and the audiences. Whilst researching for this show – we discovered that the Victorians saw Christmas – even more than say Hallowe’en – as the perfect time to hear a ghost story or a tale of the macabre. As the nights draw in, sitting around a fireside and telling stories was the perfect way to spend an evening.  One of the most famous Christmas stories, A Christmas Carol, is, of course, a ghost story!  We loved the idea that modern audiences might love to return to this tradition, and so Christmas Gothic was born!

Do you consider Christmas Gothic a family-friendly show? What sort of audience do you think is best suited for this show?
Whilst it’s not suitable for very young children, we’ve had children of eight or nine years upwards coming to see the show.  If they’re interested in being thrilled and chilled – and are already used to a few imagination-led scares, watching something like Doctor Who – then they’ll love it.  We’ve had audiences aged between eight and 108 coming to this show.

Have you got any further dates on the London stage lined up?
We’re taking Christmas Gothic to the Dugdale Centre, in Enfield, on 5th December – which is now sold out.  Our new show Jane Eyre: An Autobiography will be at artsdepot on 16 March, Harrow Arts Centre on 17 March, Omnibus Theatre, Clapham, on 3-5 May and at the Dugdale Centre on 7 and 8 June next year.  All tour dates will be on our website within the next few weeks.

You also wrote a show called Female Gothic, which introduces Victorian ghost stories written by female authors. What is it about this gothic era that excites you and inspires your work, and do you have any more gothic works or other performances in store for 2017?
The idea behind Female Gothic was to bring back the forgotten stories of the female Victorian/Edwardian writers who covered 85-90% of Gothic literature – even though, nowadays, the most remembered are E. A. Poe, Dickens, M. R. James and Le Fanu.  Many of these wonderful stories were out of publication and many belonged to writers that we currently see in a different context. For example, we think of E. Nesbit predominantly as a children’s author but her main focus was on these dark tales.  Many of the female-authored tales present a creeping horror rather than a visceral blood-and-guts gore, and often deal with who we are in our lives, who we should be and what the ‘other’ really is.  We aren’t touring Female Gothic in 2017 but we hope to propose it again in 2018.  2017 is the year of Jane Eyre: An Autobiography, Austen’s Women and then Christmas Gothic again in December.

Christmas Gothic will play at artsdepot on 8 December 2016.