Home » Features and Interviews » Interview: Dominic Tighe on ‘She Loves Me’ 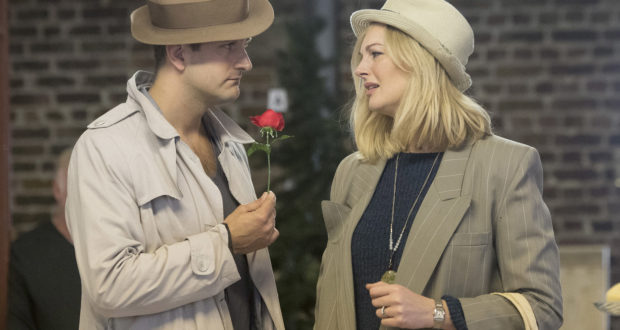 Interview: Dominic Tighe on ‘She Loves Me’

Musical theatre is back at the Menier Chocolate Factory this winter with the return of the 1963 musical She Loves Me. The enchanting musical, featuring music by Jerry Bock and Sheldon Harnick, adapts Miklós László’s 1937 play Parfumerie, which modern audiences will best know through the 1940 film The Shop Around the Corner or the 1998 rom-com classic You’ve Got Mail. Last seen on the West End stage in 1994, the musical tale of enemies who unknowingly have a pen-pal romance has now returned to London in a new production starring Scarlett Strallen. Actor Dominic Tighe, whose recent credits include The Threepenny Opera at the National Theatre and Sunny Afternoon on the West End, takes on the role of the suave Steven Kodaly. We caught up with Tighe before the start of performances to learn more about the show and his own multi-faceted career, which includes everything from Shakespeare to performing in the band Blake.

What first attracted you to this production of She Loves Me and the role of Steven Kodaly?
I have known about She Loves Me ever since I sang “Tonight at Eight” for my first-ever professional musical audition when I left drama school. I was terrible and it was a disaster, as the piano part is really difficult and the poor pianist couldn’t play it. And I didn’t get the job. But is great, 10 years on, to now actually be in the first London revival since The Savoy production. Also Kodaly has got two cracking numbers that I couldn’t resist!
What should audiences expect from this production?

For people who know the show, they might be surprised to hear us playing it in our British accents, not American. It was in US accents last time as it had come over from New York, but [director] Matt White decided that as the show is set in Hungary, there was no reason for it to be in American accents, and I think he is right. In fact, it’s a very European story, and I think that is brought out more with British accents. It’s also a hugely charming and touching show with some stunning music, so hopefully the audience will be suitably moved. But there is also an ominous underlying darker tone to the piece that I hope we haven’t shied away from.

How has the rehearsal process been so far? Has anything surprised you about the show or the role?
There are SO MANY PROPS!!! Being set in a shop that sells many different items, it has to be as realistic as possible — which means having many, many, many props. I think [set and costume designer] Paul Farnsworth has bought over 850 bottles to put on display in the shop, and many hundreds of boxes and bags! It’s been great working with such a great company and seeing them work too (especially my lovely wife Katherine Kingsley…!), so I have learnt a lot about the craft. But I am also surprised as to what an absolute shite Steven Kodalay is! He is a narcissistic misogynistic womaniser. Great fun to play!
This is the second major production of She Loves Me this year, following a successful recent revival on Broadway. What is it about this 1960s show that makes it so relevant to audiences in 2016?
It harks back to a more innocent time, pre-Tinder and Grinder, all the other dating apps and email and texts, when people took the time to actually write heartfelt letters to each other — and where two people can fall in love based on what they feel on the inside, not based on a naked torso photo! So in that respect, it’s a beautiful piece of nostalgic escapism. Matched with the stunning score and well-written book, it stands the test of time as a great piece of theatre. And it’s good that there’s been such a long gap between the two London productions. There’s lovely a parallel in that, once again, we are following the most recent Roundabout revival production, just like the last time.

This is your third production (and second musical) at the Menier Chocolate Factory, which is well-known for its high-quality musical revivals. How have your experiences been working there? How does the experience of performing at the Menier compare to performing in musicals at other theatres you’ve worked at?
The Menier is a very special place to work, as everyone is there because they are attracted by either the piece or the people, and therefore want to make a great piece of work. Attitudes from casts and creatives are always positive, which makes for a fun and rewarding rehearsal process. There is also something about the intimacy of the space that brings out a [high] quality of work. Without doubt it can be more challenging than it might be at other theatres at times, but it’s those challenges that pull the company together.

How did the experience of touring and performing in concerts as part of a musical group compare with performing in theatre?
This is much more fun! There are only so many times you can wear a nice suit and sing “Moon River”. Storytelling, in the context of a production, is much more interesting for me.

With such a diverse career, what are you hoping to do next? Are there any other genres or new artistic areas you’d like to take on, or any dream roles you’re hoping to play?
I am starting to produce screen work, which is a huge learning curve. I recently went to Kenya to shoot a short narrative fiction story about a street kid who loves football. We cast real-life members from the local communities in Mombasa and Kilif on the coast while working with charities. It’s currently been selected for several major festivals and it’s picked up distribution. I am working on a couple of bigger-scale productions at the moment with some very exciting people, so I’d like to do more of that. As for parts, I’m just happy when someone one offers me a job, though I do fancy a go at Prince Hal in Henry IV Parts 1 & 2…