You can use WP menu builder to build menus
Home » Features and Interviews » Interview: Playwright Howard Brenton on ‘Magnificence’ 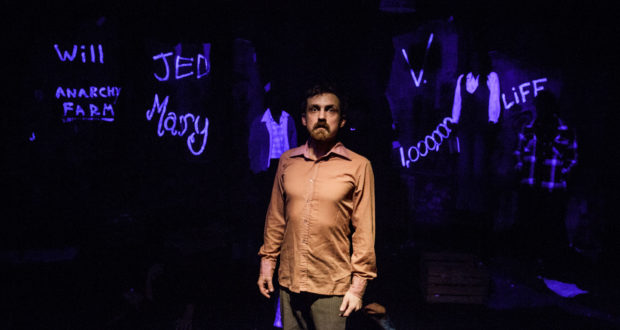 Howard Brenton’s 1973 play Magnificence has returned to the London stage for the first time in over 40 years. Now onstage in a new production at the Finborough Theatre, Magnificence parallels the ideals of five impassioned socialist activists, unsure of the limits of their revolutionary action, with two Tory MPs passing over the reins of power. Perhaps it should not be so surprising, then, in our modern context of social and international change, where political and class division seems ever expanding, that young company Fat Git Theatre are so passionate about reviving this work. To celebrate the play’s return to the London stage, playwright Howard Brenton, whose past works include The Romans in Britain, Weapons of Happiness and the recent Lawrence After Arabia, talked us through his past and present anger, motivations, inspirations and style.

Magnificence is explicitly rooted in a particularly dangerous political climate. To what extent where you writing to reflect, and to what extent were you writing to change?
The story came out of a debate that was raging in the rather amongst young leftwing activists in the early 1970s. It was as if we each carried a smoke-filled room in our heads with Lenin, Mao and the great anarchist leader Bakunin shouting at us personally!

The debate was about ‘direct action’: you say you are for revolutionary change but that’s just words, what are you prepared to do? Would you fight? Would you take up the gun? The Baeder Meinhof Red Army Fraction in Germany and the Red Brigades in Italy crossed that line, so activists were getting caught in a vicious kind of political psycho-drama. I felt the pressure of it myself… ‘deeds not words, do ends justify means’… a tightening spiral.

I decided to write the play to cut the knot and sort myself out. I did so with affection for people I knew on the ‘far left’ and with an anger I shared about the state of our country. But socialism is democratic or it is nothing. And. . . I joined the Labour Party!

Magnificence has a delicious mix of struggling ideals from different places on the political spectrum, and juxtaposes different classes and statuses so well. Do you feel a sense of responsibility when writing such passionate political dialogue, especially when representing people whose views differ from – or go far further than – your own?
No I don’t feel any such responsibility. I do feel relish for the clashes of human contrariness, though! The theatre’s celebratory. My dying Tory grandee in the play has his own kind of magnificence and I remember loving writing him.

You have never been afraid to shock, or to show what others may imply or refer to through dialogue only. How do you think that impacts on work as socially relevant as yours, for example, in the case of political extremism?
I don’t set out to shock. I just see the world in bright colours. As for impact on political extremism . . . well, the play seeks to demonstrate that it’s a waste of idealism and hope.

It is striking how relevant Magnificence remains today, in our current political climate. How does today’s audience differ from that of the 1973 Royal Court run, and what aspects of the play do you anticipate will resonate differently?
It’s very difficult to say. How a play resonates is beyond any authorial control. As I said, you can’t second-guess an audience. You just have to follow your own drum and hope. The beat’s being heard! Seeing the play 43 years after it was written – it obviously is about a political quandary. But it has a visceral quality, a kind of poetic desperation. I suddenly realised it’s not really a ‘political play’, it’s metaphysical, it’s about a fallen world.

The Finborough Theatre is such an exciting space with great reputation for staging socially important work. What do you think is the importance of theatres such as this – especially fringe theatres – in today’s arts scene?
Intimacy. In the small spaces theatre’s potentially at its most powerful because it’s stripped to its basics. It’s you and the actor’s voice and body playing out a story, a few feet away. It’s the appeal to the imagination that can be so vivid, that séance-like magic. You are crammed into a small, dark, scruffy room, somehow by word-painting and gesture actors make you see a huge Summer garden . . .

What playwrights and screenwriters most excite you currently, and what do you hope to see coming through from the newest generation of creators in the arts?
I love Pedro Almodovar’s movies. His latest still have a wicked, surreal edge but they have become graver, formidable. And there’s a brilliant young writer at play in the British Theatre, Chris Urch; his most recent play was The Rolling Stone seen at The Orange Tree. It’s great to see Lucy Kirkwood writing big ‘state of the nation’ plays – though Chimerica was more a ‘state of the world’ play. I’m looking forward to her new one Mosquitoes at the National.

What inspires you today with the work you create, and has it changed at all from what first drew you to writing?
I’m very angry about what has happened to my country, I’m sick of this third rate dinner party for the few in the ruins of what should have been, by now, a decent, democratic socialist country finally free of the illusions of empire and at peace with itself. While I have breath in lung and pen in hand . . . I’m not going to put up with it!

Magnificence is currently playing at the Finborough Theatre through 19 November. The run will be accompanied by the FINBOROUGHFORUM, a series of informal post-show discussions and debates on Wednesday evenings. Tickets and more information about the FINBOROUGHFORUM can be found here.