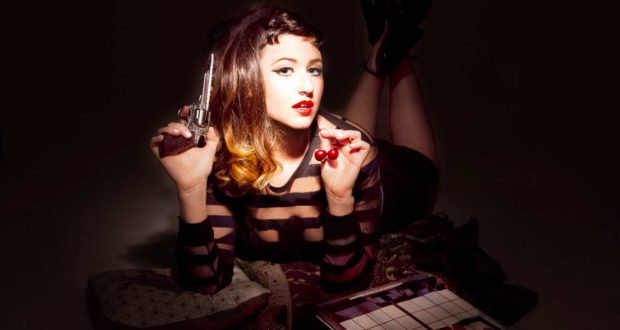 Pros: A powerful, charged work featuring a strong central character Cons: The second performer appears awkward, never having seen the script before; neither actor produces emotional engagement A man and a woman stand in front of microphones on a largely bare stage, their actions filmed from two angles and projected onto a screen behind them. She's confident and authoritative, as well she might be, for she both devised and wrote this play. He's nervous, unsure of himself; he's never seen the script before tonight, and reads his lines from an autocue. Taking its title from Jean-Luc Godard's celebrated pronouncement&hellip;

User Rating: 4.65 ( 2 votes)
A man and a woman stand in front of microphones on a largely bare stage, their actions filmed from two angles and projected onto a screen behind them. She’s confident and authoritative, as well she might be, for she both devised and wrote this play. He’s nervous, unsure of himself; he’s never seen the script before tonight, and reads his lines from an autocue.

Taking its title from Jean-Luc Godard’s celebrated pronouncement that “All you need to make a movie is a girl and a gun”, this is writer/deviser/performer Louise Orwin’s reaction to the plethora of girls and guns in popular fiction, and to the way in which they’re both treated.

His dialogue (and sometimes hers), and the stage directions, are projected onto the rear screen along with the two views of the performers. After her somewhat overlong opening monologue, she performs a sultry dance to a Nancy Sinatra track, as the projection reads: “The audience are unsure whether she is dancing for them, or the camera”. It’s not just the man who gets stage directions: as the audience, we’re also told how we feel and how we should react to the action.

Throughout the show she eats cherries from a basket, spitting the stones to the side of the stage; in fact, she does a surprising amount of spitting in the show. The cherry theme comes up again and again, both as fruit and as metaphor.

It’s not an easy play to watch, with moments of implicit sexual violence; there are occasions when the man is clearly unhappy about performing the aggression in his stage directions. There are a few moments of humour, most notably when he tries to gabble his way through a speech for which the autocue is going much too fast, and when he grapples with the problem of trying to don the legging portion of his cowboy costume.

The show is a challenge to films “which star girls and guns as plot devices, and the audiences that watch them.” And certainly, it is uncomfortable watching such a strong female character gradually turning into an object owned by the masterful male. “It looks like we’re in a movie,” she says towards the end, “a movie where you and I play him and her.” And it’s the very notion of ‘him and her’, of the traditional male-female relationship as depicted on stage and in the cinema, that’s at the heart of this ambitious piece.

Does it succeed? To a large extent, yes, carried by the sheer power of Orwin’s electric performance. But the male performer is too ill at ease, too uncertain of how to behave when not following explicit directions. It is distracting to see him glancing at the autocue to check if he has any further instructions.

It’s also hard to engage with either of the characters, as they’re portraying archetypes rather than individuals. As drama, it’s somewhat unsatisfying. More of a performed artwork than a stage play, this is a show that will leave you thinking long after it ends.