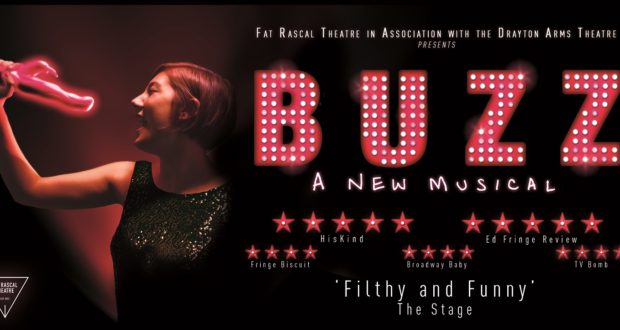 Win tickets to see Buzz at The Drayton Arms

This is your chance to win a pair of tickets to see Buzz, at The Drayton Arms. To enter simply retweet one of our Buzz competition tweets before 5pm on 13th October 2016 AND name something that buzzes.

#COMPETITION: For the chance to win tickets to #Buzz @draytonarmsSW5 retweet by 5pm on 13.10.16 AND name something that buzzes.

Winner of the 2016 Stella Wilkie Award
Winner of the East 15 New Companies Award 2016 and
Winner of The Eddies Award 2016
Shortlisted for the Les Enfants Terribles Award 2016
BUZZ is a hilarious musical journey through the history of the vibrator and a brutally honest story of a singleton’s quest to fall back in love with herself. Join us as we finally uncover the untold struggle for women’s sexual independence throughout the ages. Bridget Jones meets the Book of Mormon.
‘BUZZ is a witty, intelligent and empowering piece of writing…builds upon the foundations laid by Bridget Jones, but takes them further into a victory for women…This Fat Rascal Theatre production fully restored my faith in theatre as a medium for change’ –EdFringe Review

‘Filthy and Funny’ – The Stage

BUZZ is a feminist production proudly celebrating women’s independence and sexuality. This is not your average musical. With a cast of 9 recently graduated actor musicians, Fat Rascal transports the audience from the cave women of the Stone Age to Victorian London’s Hysteria Pandemic, from Cleopatra’s Egypt to the Land Girls of World War II. BUZZ is a fun approach to feminism, a comedy with a message aiming to liberate young women and open conversations about taboo subjects.
‘BUZZ carries a great message for the single ladies…and laughs for
everyone no matter what gender you are.’ – TV Bomb
Fat Rascal Theatre is a fresh new company from this year’s East 15 Acting School graduates. They are bold, cheeky and brash, using music and comedy to educate and empower. After a sell-out Edinburgh Festival run, Robyn Grant (Book and Lyrics) and James Ringer-Beck (Music) are thrilled to be bringing Buzz to this wonderful theatre in South Kensington for an all inclusive three week run. Winning The Drayton Arms’ Eddies has given them the chance to develop the show further with Taylor Danson and Freya Espie (Directors) and Matthew Ives and Allie Munro (Choreographers), and a cast which includes Taylor Danson and Adam Napier (Peter Pan, Regents Park Open Air Theatre). It has given them the opportunity so desired by young theatre companies: to create brave new work in a financially safe and supportive space.
About the Drayton Arms Eddies Awards
Artistic Director Antonio Ferrara said: “The Edinburgh Fringe is an amazing showcase for hundreds of fascinating and innovative companies every year, but it’s financially exhausting, and that makes it hard for new companies to capitalize on their Edinburgh successes.
“With this in mind, this summer we [the Drayton Arms Theatre] launched the Eddies – a new award for shows performing at the Edinburgh Fringe, with a top prize of a three-week London transfer at the Drayton Arms with technical support and generous marketing thrown in and 100% of the box office for the winning company.
“So I’m delighted to announce that the winner of the inaugural Eddies Award is Fat Rascal Theatre, with BUZZ. A hugely ambitious musical coming from a genuinely collaborative company of artists; which manages to be both inventive and political, hilarious and accessible all at once. I’m proud to be able to bring BUZZ to London and the wider audience it deserves.“

Terms & conditions
Winner will be selected at random from all entries. Competition closes at 5pm on 13th Octobe 2016. Winner receives a pair of tickets to see Buzz at The Drayton Arms. Tickets to be collected at the box office with no cash alternative. Tickets are subject to availability and are non-transferable and exchangeable. Additional expenses are the responsibility of the prizewinner. Editor’s decision is final.