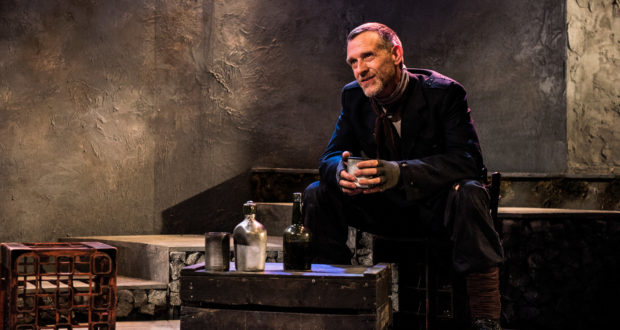 Pros: A challenging play that leaves you ripe for debate on the journey home, and continuing to question its message long after curtain down.

Cons: It runs the risk of being flooded by literary and cultural references.
The Acedian Pirates, Theatre503 – Review

Pros: A challenging play that leaves you ripe for debate on the journey home, and continuing to question its message long after curtain down. Cons: It runs the risk of being flooded by literary and cultural references. The two things you can always guarantee with a visit to the marvellous Theatre503 are a lovely warm welcome when you first walk in, and a mind buzzing with questions when you walk out. This is a theatre that sets out to produce challenging work that is modern and relevant to the world we live in. And in Jay Taylor's debut play,&hellip;

Jay Taylor's debut play about war shows great promise and is a tribute to the Theatre503 Playwriting Award of which this was previously shortlisted.

The two things you can always guarantee with a visit to the marvellous Theatre503 are a lovely warm welcome when you first walk in, and a mind buzzing with questions when you walk out. This is a theatre that sets out to produce challenging work that is modern and relevant to the world we live in. And in Jay Taylor’s debut play, The Acedian Pirates, the run of highly challenging plays continues as Taylor ponders the meaning of war and those actions that are carried out abroad in our national name.

The Acedian Pirates follows a group of soldiers fighting a war in a faraway unidentified land. As they wait in a lighthouse they muse on what they are fighting for and what their own lives mean. Above them their commander sits alone, and the figure of a young Helen is also present, representing the focal point over which they fight. There is no indication of time; this play could easily be an ancient war just as well as a more contemporary one. In fact, with its mixture of Greek mythology alongside a set that is both ancient and modern the play successfully traverses a general territory of warfare throughout history. It’s timeless.

Greek mythology is a strong theme of the play. It is of little coincidence that two of our central characters are Helen and Troy. In fact the Helen of Troy reference is further strengthened by constant reference to the moon, something that it is argued Helen’s Greek name actually meant. And with the whole play being set in a lighthouse, it again seems likely that this is a nod to the Lighthouse of Alexandria.

Alongside the Greek mythology, there appears to be endless other references. The uniforms of the soldiers have a strong hint of early 20th century; the roundabout nature of why and what they are doing hints very much at Kafka; while their homeland name of Capital State seemed very influenced by 1984. Even the end scene struck a distinctly Tarantino note in my mind.

In fact there are so many references that at times it feels as if the writer is trying to be just a little too clever. I found myself more obsessed with picking out the references than I did concentrating on the play. There is surely a point where to reference so much else risks losing your own identity? In my mind this play is strong enough to hold its own.

That criticism aside though, with its central premise of the purpose of war the play is as thought provoking as you would expect from Theatre503. Is it fought for the good of those involved, or for the wealth of the victor? Or simply as something for men to do? It felt very much as if the Iraq war was at the forefront of the writer’s mind. But then again, it could as easily have been any war at any time, something cleverly pulled off by the mix of the mythological and the modern.

The six strong cast all excel in their roles, each portraying such varying characteristics; Cavan Clarke’s Jacob is the quiet thoughtful reader seeing through his comrades heroic talk; Rowan Polonski’s Troy, one moment seemingly insane with bloodlust, the next possibly the sanest of them all as he speaks of why he thinks men go to war; meanwhile former Eastender Marc Bannerman surprises with his quiet simmering strength as he sits brooding as conversation turns to matters he may disagree with. Then there is the sole female in the cast, Sheena Patel’s enigmatic Helen. Is she a prophet, a source of power or just a young girl caught up in the men’s foolishness?

The Acedian Pirates is one of those beautiful things that doesn’t try to provide us with answers. Instead it asks questions that have so many possible answers, none of which are wholly right and probably none which would be wrong.