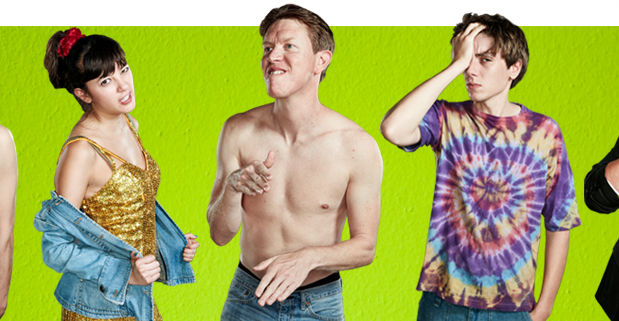 Cons: The narrative is a little disjointed, and it’s hard to care for characters that don’t seem to really care about anything.
Shopping and Fucking, Lyric Hammersmith – Review

Pros: Colourful designs, cartoonish characters and an assortment of theatrical gimmicks keep this production consistently stimulating. Cons: The narrative is a little disjointed, and it’s hard to care for characters that don’t seem to really care about anything. This revival of Mark Ravenhill’s 1996 play demonstrates a desire to stimulate from the moment you enter the theatre. The Lyric’s main house has been transformed into a kind of dystopian Tesco Metro; it’s all bright colours, bold shapes and marketing trickery. Cameras and a green screen sit proudly onstage, waiting to be used for all sorts of striking multimedia illusions.&hellip;

This is a boldly realised world of heightened consumerism and addiction, but it contains more fun than fulfilling content and more manic energy than meaning.

This revival of Mark Ravenhill’s 1996 play demonstrates a desire to stimulate from the moment you enter the theatre. The Lyric’s main house has been transformed into a kind of dystopian Tesco Metro; it’s all bright colours, bold shapes and marketing trickery. Cameras and a green screen sit proudly onstage, waiting to be used for all sorts of striking multimedia illusions. The ushers are keen, desperate even, to sell you your very own ‘official Shopping and Fucking badge’ for only fifty pence. They’ll even get you better seats for the small price of a fiver. These are the first not-so-subtle signs of a production that will attempt to fully immerse its audience in the world it has created; a world reigned by consumerism and addiction. It’s a brutal, odd world; often amusing, sometimes provocative and, unfortunately, occasionally quite unsatisfying.

Mark (Sam Spruell), Lulu (Sophie Wu) and Robbie (Alex Arnold) are a flat-sharing trio of disconnected young adults who want to become better people. Mark’s trying to overcome addiction, Lulu needs a job and Robbie just wants to spread happiness. The play is most engaging when their failures in these individual goals begin to intertwine and escalate. Mark, who believes paying for sex will allow him to remain emotionally unattached, finds himself irresistibly attracted to teenage rent-boy Gary (David Moorst). Meanwhile, his flatmates’ efforts at self-improvement culminate in a substantial debt to their dangerously unsympathetic employer Brian (Ashley McGuire), who pursues profit with the zeal of a fanatic.

The cast bring a deliciously nervous energy to the stage. They play it large and loud, with wild gestures, speedy delivery and a habit of addressing the audience. This style feels appropriate for the gaudy design; this is a cartoon world for cartoon characters (albeit cartoon characters who aren’t averse to a bit of ecstasy and prostitution). These heightened aspects of the production might fit together a little too well; we’re rarely allowed a glimpse into how these people might actually feel about their bizarre but also horrific situation. While they’re good for a chuckle, the characters are hard to empathise with and so there’s very little emotional impact in pivotal scenes. The script provides moments that are truly distressing or genuinely joyous, but they are often interrupted by broadly comic musical interludes. Although these karaoke segments provide some fun, it comes at the expense of a coherent and satisfying narrative.

Halfway through the play Robbie spends a night at a club on ecstasy, which seems like an experience somewhat similar to watching this production; director Sean Holmes has put together a lively night out with lots of thrilling things to look at and listen to from moment to moment, but upon reflection you just might come to the conclusion that it was a little unfulfilling.