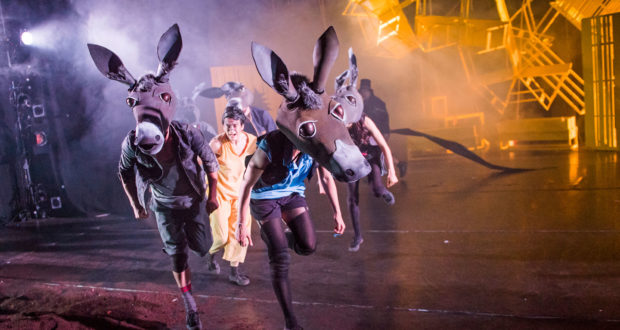 Jasmin Vardimon has mesmerised the world with her unique and innovative dance productions, based on a multi-disciplinary artistic approach and the quirky observation of human behaviour. Founder of the Jasmin Vardimon Company and Associate Artist at Sadler’s Wells for the last decade, the Israeli-born choreographer has been awarded by the International Theatre Institute for Excellence in International Dance and, in 2014, the Royal Holloway, University of London even conferred her an Honorary Doctorate. Ahead of the London debut of her newest piece Pinocchio, which will stop at Sadler’s Wells this month as part of a UK tour, Jasmin discusses her special relationship with Collodi’s 1883 novel and reveals what convinced her to adapt this masterpiece for the stage.

‘The Adventures of Pinocchio’ is one of the most educational novels in the Italian popular tradition. How did you first discover the story?
I first came across it as a child through a Japanese TV programme that was aired in the 1970s.  Later I saw the Disney version and much later read the original 1883 Collodi’s book. As in many cases, the novel felt much more rich and inspiring than the screen interpretations.  I liked it not only for its story, but also knowing it was written at a time when Italian society was philosophically and morally engaged in a very important question about the nature of education. Could peasants be educated? Could their children go to schools and become ‘real boys’, or were they destined to be merely work force ‘donkeys’.  I was fascinated by this classic tale that allows us to explore our assumptions of what it means to be human.

The decision to interpret a famous story is a bit of a departure from your usual style. What convinced you to adapt the famous tale?
I decided to create a piece that is also suitable for younger audience.  I felt that a well-known tale would be an interesting challenge. Over the years I have enjoyed surprising myself and testing my creative process. I like to challenge myself, and therefore last year I created ‘Maze’, an intimate immersive piece, in collaboration with the art gallery Turner Contemporary.  Recently I finished working on a book – which is going to be published soon – and each of my previous stage works explored a new direction and approach. ‘Pinocchio’ is my new adventure. . .

Your work relates often to the accessibility of the arts. How do you define the idea of ‘accessibility’ and what makes ‘Pinocchio’ an accessible production?
I’m interested in telling a story through using the entire capacity of the human body: physically, vocally, emotionally and intellectually. I believe that when you create a product that is multilayered, it can communicate on several levels and therefore becomes more accessible.

Pinocchio, as a character, mutates from a wooden marionette to a donkey, before becoming a child. How does the choreography reflect this changeability?
His transformation is even greater in the original story as he slowly learns to recognise and understand human emotions. He transforms throughout the adventures he encounters, and this is reflected in the choreography.

What was your inspiration for the production’s visual concept?
[Dramaturg and co-set designer] Guy Bar Amotz and I wanted to create a stage that also functioned as a marionette theatre, making the interactive set part of the choreography. Some scenes are played out suspended five meters above the stage.  All the scenery is attached to strings and it’s all manipulated by the performers on stage.

Your work is also known for its incorporation of innovative technologies. How do those come into play in this production?
We do have moments of animation and other moments of visual surprises, all controlled by the performers. This time the whole mechanism is also exposed to the view of the audience.

Pinocchio had its premiere at the Kent’s International Family Festival bOing! on 27 August. How satisfied have you been with the work’s reception and its UK tour thus far?
The presentation at the Kent’s International Family Festival bOing! went fantastically well. I was a bit worried about the attention span of the younger audience, as the piece runs at an hour and a half. We were very positively surprised how engaged the audience were throughout and, afterwards, with their responses and feedbacks. Following the premiere, we have had many enquiries in buying the show’s DVD, which will be ready soon.

What do you think ultimately makes your ‘Pinocchio’ unforgettable? What should audiences expect from this production?
The dancers are world class performers.  They bring ‘Pinocchio’ to life in an unforgettable way and the visual design – the set, the lighting and the costumes – are rich and imaginative.

Pinocchio will play at Sadler’s Wells on 24 and 25 October 2016. Tickets can be booked here.