Home » Features and Interviews » Interview: Bringing ‘Vanities’ to the UK 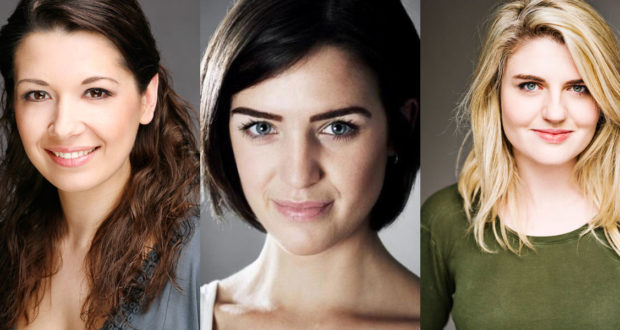 Interview: Bringing ‘Vanities’ to the UK

Vanities’ tale of female friendship has had a long history. Centring on the friendship of three Texas women throughout different phases of their lives, Vanities originally debuted as a play by Jack Heifner in 1976 before being adapted into a musical 30 years later in 2006. Now, the female-led musical is celebrating its 10 year anniversary across the pond with its UK debut. Bringing the show’s central friendship to life at Trafalgar Studios are three veritable West End stars: Ashleigh Gray (Wicked, Cool Rider), Lauren Samuels (Bend it Like Beckham, BBC’s Over the Rainbow, Grease) and Lizzy Connolly (Mrs. Henderson Presents, Dirty Rotten Scoundrels, Xanadu). We caught up with these three talented ladies to learn more about the show, going from West End stages to Trafalgar Studios’ more intimate space, and the importance of putting more strong female characters on stage.

What first attracted you about Vanities and the character you’re playing? Have your opinions evolved at all so far during the rehearsal process?
Ashleigh: I think my character, Kathy, and I are rather similar actually. I recognise so many of my traits (good and bad) in her, so perhaps the challenge of playing that on stage is what first attracted me to the show. That and its wonderful score. There are some great songs in this show and as we cross over a good few decades, it touches on all sorts of styles. There’s close harmony, 60’s style, Supreme-type numbers, a bit of Bossa Nova and then some gorgeous Musical Theatre ballads. It’s got it all.

Lauren: I really loved the idea of doing a female-strong three-hander and have always wanted to work at Trafalgar Studios. I love intimate spaces. The character of Mary is so fantastically liberated and I loved that about her. She has no inhibitions. She’s the one that constantly shocks the other girls and because of that she’s exceptionally fun to play.

Lizzy: Joanne is willingly ignorant and thoughtless, and prides herself on these things. She doesn’t waste time being thoughtful and she can come across as unkind, when at heart she is the most loyal and loving person. She is that friend that makes you feel bad about yourself while trying to give you a pep talk. She is an under-thinker and I’m a massive over-thinker. She is so different from Doris in Mrs Henderson Presents, who told the jokes. Joanne is the butt of them!

What should audiences expect from Vanities?
Ashleigh: Audiences should expect to be taken on a real journey with this show. As I said, it spans across four decades and what’s so lovely about the piece is that while it’s going to be a nostalgic trip for some people, even if you didn’t live through these eras there’s going to be something in there for you.

Lauren: It’s a lively, energetic musical with three strong Texan women that I think a lot of people will relate to. People will enjoy following the very different lives of these women as they attempt to cling onto each other’s friendships.

Lizzy: Some good songs! The soundtrack is really girly and fun! The show is a very intimate look at a friendship. It highlights the good bits and the troubles. Friendships and relationships are hard. It’s tough being human and making mistakes, having to admit fault and having to forgive.

All of you have been in some huge West End spectacles (Wicked, Dirty Rotten Scoundrels, Bend it Like Beckham, etc.), whereas this is show is much smaller, with only a 3-person cast. How do the two experiences compare for you?
Ashleigh: They’re both incredibly different. I, for one, love these intimate venues. When you can see the whites of your audience’s eyes and really feed off their reactions, it makes it so much more interesting. It obviously adds a bit of pressure, though — mistakes are easily spotted in smaller spaces. I find it all very exciting. I’ve played Trafalgar Studios 2 before, with Betwixt the Musical, and I’m very much looking forward to going back.

Lauren: I love doing intimate theatre. Having the audience so close to you feels fantastic, like they’re part of the story themselves. I think audiences will feel so much more connected to us as people. Like they are a fly on the wall of these girls’ lives. Performing to 100 people who are only an arm’s length from your face is so much more nerve-wracking than performing to 2000 in a huge theatre.

Lizzy: I really like how intimate it’s going to be. It’s like a magnifying glass look on the story. God, that’s going to be horribly exposing! I like it in theory. We will see how it feels in practice.

Vanities has an entirely female cast and focuses on female friendship, but gender inequality has recently become a huge topic of discussion, driven by campaigns like Equal Representation for Actresses. What are your thoughts on this issue of gender inequality in theatre, and how do you feel about getting the chance to be a part of such a distinctly female-driven show?
Ashleigh: I think what makes it more difficult in this industry– in musical theatre in particular – is that there are so many more women out there doing it than men. I think when I graduated from drama school the split was almost 70/30. And with the majority of roles being male, it makes it even harder for women to secure the parts, so I’m absolutely celebrating sharing the stage with these two fabulous women. I think there’s something very unique about female friendships which make for fascinating storytelling. We’re having lots of fun doing this piece but I also hope that inside it is a lesson on the value of female friendship. Lessons on how not to do it, and how to accept each other, and how to work together as part of the same team.

Lauren: It’s a shame that something like gender inequality is still so apparent, but sadly it is. It’s outrageous that as females we should be treated any differently on stage doing the exact same performance as our male peers. Going from Bend It Like Beckham, where I was also playing a strong female character the story was so heavily focused on the relationship between two women and their passion for football, to this piece – again focusing on the strong bonds between women – is great. I feel proud to represent strong women on stage.

Lizzy: We need interesting characters for women. We need more characters for women over 40! There are so many tremendous actresses out there who are no longer the ingénue. Despite their wealth of experience and the amazing work they have done, the parts written for them are thin. These women are interesting and there needs to be more parts. Of course you can name some, but we just need more. We are missing out on some magic being made on stage!

Vanities was originally written in 1976 and takes place in America throughout the late 20th century, a totally different world from 2016 London. Why do you think this show (as both a play and musical) has endured for so long, and how do you think it will resonate with UK audiences today?
Ashleigh: I think because it has at its heart a universal theme: friendship. I think it also stands the test of time because it has such a variety of emotions running through it. You laugh with these girls but you also cry with them. It’s incredibly truthful and that’s why I think it works. People can relate to these women and their stories and, more so now than ever, I think solidarity amongst human beings is to be embraced, and this show certainly does just that.

Lauren: I hope lots of people will relate in different ways to the characters and their varying stories. We’ve all spent time in education. We’ve all had close-knit groups of friends who at some point we couldn’t imagine living without! And I think we’ve all had dreams as children of being one thing, and then realising later in life you wouldn’t want to do that in a million years.

Lizzy: We laugh at the out-dated opinions of these ignorant girls the way future generations will laugh about the number of pictures we take of our food and the filters we put on them before we even eat the meal! However, this musical is about the way the characters act with each other. It’s about everything and nothing all at the same time, and I love it for that. I hope audiences do too. I also think is funny and sad at the same time, with some super fun songs! I hope they will get it and embrace it.

Vanities: The Musical is currently playing at Trafalgar Studios through 1 October.