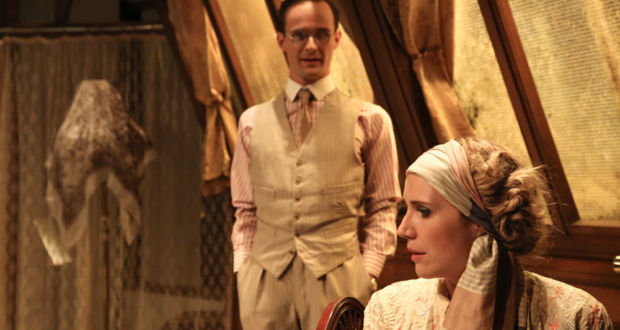 With affordable and ground-breaking productions of great classics, the Olivier Award-winning company OperaUpClose offers a valid and accessible way to enjoy opera in a more intimate setting. Their Prohibition-themed version of La Traviata premiered in 2013 at the King’s Head Theatre and later transferred to the Soho Theatre, where it received critical acclaim. Introducing its upcoming revival at artsdepot, Executive Producer Dominic Haddock spoke more with us about what makes OperaUpClose so unique.

The Independent has described OperaUpClose’s work as ‘operatic classics on a shoestring, in a shoe-box’. How accurately do you think that description sums up your work?
This was said of us a couple of years ago and back then it wasn’t far from the truth. We were based in a 100-seat pub theatre for the first few years of the company’s life and loved the freedom it gave us to experiment, but when you have no subsidy and only 100 seats to sell, your budget has to be shoestring. The pub theatre felt a little shoe-boxy but we’re very proud of the work we produced there. Since then, we’ve developed significantly as a company and the work we make now is on a larger scale, but we still retain the intimacy and proximity to performers that our work is known for.

Opera generally appeals primarily to a niche audience, even amongst avid theatregoers. How would you convince the ‘average Joe’ to buy a ticket for OperaUpClose instead of a West End musical? What makes OperaUpClose accessible to all audiences
Opera as a concept is intimidating for a lot of people. The DCMS reports that fewer than 4% of adults go to an opera each year and overcoming that was one of the reasons we started OperaUpClose. We thought about what was intimidating and tried to create productions that broke down those barriers. We identified a language barrier, the cost of tickets, the stories not relating to a modern audience, geographical provision and daunting venues as the main issues. We produce opera in English, so that our audiences can understand every word. We make all our tickets affordable – and good tickets too, not just the ones at the back of the balcony. We set our new versions in contexts that the audience can better relate to than the original. Not necessarily contemporary, but a time and place that we understand. We have a modern day London La Bohème, a 1950s Hollywood Elixir of Love, a German Tosca set as the Berlin Wall is falling, a Jane Austen-inspired Barber of Seville, and the 1920s Atlantic City La Traviata, which is coming to artsdepot this month. To overcome geographical provision, we tour across the UK, actively seeking out areas which other opera companies don’t tour to, and last year visited over 30 towns and cities. Grand opera houses can be intimidating, so we started working in pub theatres and we now work in welcoming local arts centres. We also deliver fun workshops to young school children.

So Joe, don’t come to see one of our operas instead of a musical. Come as well as going to a musical! There are plenty of evenings a week and we’re coming to a theatre near you so you don’t have to schlep into Soho.

This production of La Traviata was first staged in 2013, before transferring to the West End the following year, and received quite positive reviews. Have you learned anything from that production that you’ve changed for this 2016 revival?
We were really pleased with the audience and critics’ reaction. The show got lots of four-star reviews, including the Guardian, who described it as ‘compelling, striking music theatre of considerable integrity and force’. It’s the same production that we’re bringing to artsdepot. Of course, ideas develop and the creative team revisits things to make sure that the show is kept fresh, but you’ll have the same wonderful cast, the same beautiful music and same heart-breaking story.

What was your reasoning behind the production’s 1920s setting? Was it at all a consequence of the “Great Gatsby effect”, considering that the film came out earlier the same year, or was there something specific in the opera that attracted you to the setting?
We weren’t particularly Gatsby-inspired. I believe Robin Norton-Hale, who wrote and directed the new version, was influenced by the HBO series Boardwalk Empire. What we try to do is find a time that modern audiences will understand and that also fits the themes and politics of the original, telling us something about the universality of the opera’s themes. Prohibition Atlantic City worked wonderfully for La Traviata, with its shady booze ‘barons’, dodgy politicians, high-class courtesans and rife double standards. What’s great about this production is that if you know the original, you’ll get lots out of seeing how it’s been reworked for the period, but if you haven’t, you can take it totally at face value and it’s a gripping story.

In 2014 you brought La Bohème and L’Elisir D’Amore to the Ravenna Festival in Italy. Would you repeat the experience with La Traviata, knowing what an important role it plays within the Italian operatic tradition?
Yes, absolutely, we’d love to. We’re talking to a few festivals and producers in Europe at the moment, in Italy and further afield. It’s exciting, we’d love to reach audiences there and see what they make of it. The two we took to Ravenna went down really well.

What’s next for OperaUpClose? What productions can we look forward to from you in the near future?
This Autumn we’re touring our Carmen, which came to artsdepot in the Spring. We’re also touring our opera for children, Ulla’s Odyssey, and its creative learning workshops. Finally, we’re developing a new production of The Magic Flute, which will open in London in Spring 2017, then tour. In November, La Bohème will be at the Cutty Sark.

What do you think ultimately makes OperaUpClose’s production of La Traviata unforgettable?
I think you should come and see for yourself what all the fuss is about…

La Traviata will play at the artsdepot on 29 September 2016. Tickets can be booked here.