Home » Features and Interviews » Interview: Dan Coleman on ‘The Man Who Would Be King’ 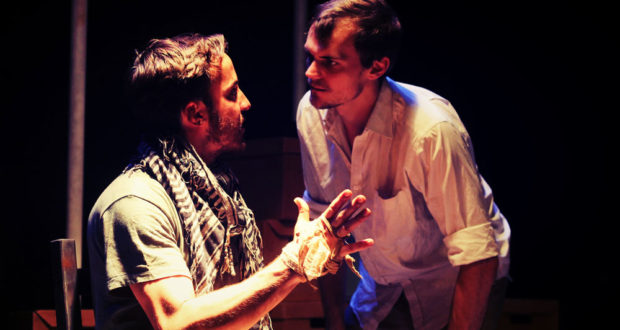 Interview: Dan Coleman on ‘The Man Who Would Be King’

Author: Everything Theatre in Features and Interviews 15 September 2016 0 503 Views

Contemporary theatre troupe Dawn State Theatre Company is known for their bold takes on classic texts and stories, with past works drawing inspiration from Shakespeare’s sonnets and Britain’s bloodiest witch-hunt in 1615. Now, the young company is turning their attention to Rudyard Kipling with The Man Who Would Be King, an adaptation of Kipling’s classic novella. Ahead of the show’s UK tour, adaptor and director Dan Coleman spoke more about the show, adaptation, and achieving success as an independent theatre company.

What can you tell us about The Man Who Would Be King?
It’s the story of 2 ex-SAS who, having spent several years fighting in Afghanistan, decide that they’re going to head up to a remote region of northern Afghanistan, enslave the natives, and install themselves as kings. Their plan works for a while until their army begins to turn on them.

It’s based on Rudyard Kipling’s first novel which he wrote in 1888 when he was just 22 years old. At that time he was working as a journalist in the North West of the British Raj – what is now Pakistan. It’s a story about vaulted ambition and the sense of entitlement that embodied British colonialism at that time.

You founded the Dawn State theatre company to make contemporary theatre inspired by classic texts and forgotten stories. What influenced you to make that your focus?
I think theatre is best when it’s timeless. The plays that are not inclined to a particular era are the ones that stand the test of time. I like theatre that works in the realms of myth and allegory. We founded Dawn State to make timeless, thrilling stories that are also politically and socially incisive.

Why did you choose to adapt this particular story?
We thought it was quite an interesting way of looking at the current situation in the Middle East. I adapted it in 2014 as British troops were pulling out of combat roles in Afghanistan. One comparison between the current state of affairs and Kipling’s story is the way western adventurism creates chaos in its wake. Over the last few decades the West has trained militias all over the region and we’ve ended up fighting a lot of them ourselves a few years later. The characters in Kipling’s story train Afghans to help keep themselves in power only to have that army turn on them when circumstances change.

The story also touches on a particularly British sense of entitlement. The soldiers in The Man Who Would Be King feel that the world owes them something – so they go out and take it. It’s the same attitude early Imperialists had – and it’s related to the idea of Britain and America as the world’s police today. We’ve got different objectives now but we still think we have the right to impose regime change through invasion.

And it’s not just nation states that go off adventuring today. There’s a big market out there for veterans of the Iraq and Afghanistan wars in mercenary forces. Companies like G4S pay a lot of money for soldiers of fortune to guard oil fields. They’re like modern day privateers in a way.

There was a film made of The Man Who Would Be King back in the 70s with Michael Caine and Sean Connery. Have you seen it?
I have, yes. I remember loving that film when I was a kid but when I watched it again recently I was struck by how inappropriate the tone seems now – it’s even nakedly racist at times. It’s depicted like a Boy’s Own adventure about plucky British heroes. But those men aren’t on an adventure, they’re becoming War Lords.

The cast of two play over a dozen characters between them. How do you go about making every character different?
It took us a lot of time to arrive at the finished product. My first priority is always the psychology of the characters. It’s about going from the inside out rather than the other way around. You’ve got to treat every character like a real character, even if they only have two lines. We found that if we knew who every character was, and what they wanted, then audiences understood as well. The vocal work and the physical language followed on from there.

Dan Nicholson, who plays Peachy, wrote the original music for the play. What does Dan’s music bring to the piece?
It’s a really important part of it. It creates an atmosphere that you’d need a huge amount of technical resources to achieve through other means. When you’re trying to create a world with mountains and armies in a single room then music is a very important tool to have at your disposal.

The company’s first two shows, The Man Who Would Be King and The Wonderful Discovery of Witches in the Country of Lancaster, were both critically acclaimed hits at the Edinburgh Festival. They have since played at venues in London and Oxford. It must be very gratifying to have that level of success as an independent company but how hard is it to break through to the next level?
It’s very tough sometimes. I’ve been lucky enough to work with some people who are on the same journey but who are much further down the line. Groups like English Touring Theatre and Knee High or people like Emma Rice. I’ve leant what I can from them so I’ve got a reasonable idea of what the next steps look like. Every time you finish a project you’ve got to think ‘what’s next?’

This tour is the first time we’ve received Arts Council funding. We’ve used that to bring together a creative team who can take the professional and artistic standards of the production up to the next level. Hopefully we can keep that momentum going.

So what is next for Dawn State?
If this tour goes well then we’d love to take our other show on tour as well. Looking past that, there are also some plays I’d be interested in doing. The Chairs by Ionesco would be a great one to do. We started Dawn State to do three types of work; adaptations of classic novels, new work inspired by forgotten stories, and new versions of classic plays. We’ve done the first two so far so it might be time to have a go at the third!

The Man Who Would Be King will play at the Greenwich Theatre from 20-24 September, before embarking on a UK tour. Information about additional tour dates can be found here.

Previous: dreamplay, The Vaults – Review
Next: 27, The Cockpit  – Review