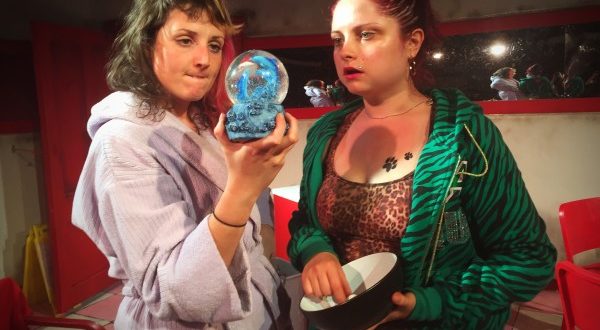 Pros: A poignant examination of young adults dissatisfied with life in their home town. These are bold characters portrayed with joy and compassion.

Pros: A poignant examination of young adults dissatisfied with life in their home town. These are bold characters portrayed with joy and compassion. Cons: Occasionally the plot felt a little contrived and the jokes a little predictable. Ugly Lovely opens as two boozed up young women stumble into a kebab shop, squealing and swearing and sharing box wine. It’s a bold beginning; their seriously short dresses are soaked from the hail outside and reveal the outline of the underwear that they have carefully, or perhaps carelessly, chosen for a night out on the pull. As their attention swings sloppily&hellip;

Lively and honest examination of life in Swansea. A well-observed tragi-comedy that excels in the tragic.

Ugly Lovely opens as two boozed up young women stumble into a kebab shop, squealing and swearing and sharing box wine. It’s a bold beginning; their seriously short dresses are soaked from the hail outside and reveal the outline of the underwear that they have carefully, or perhaps carelessly, chosen for a night out on the pull. As their attention swings sloppily between bouts of raucous singing and petty squabbles over who gets to buy a hot dog with the little cash they can pool together, it’s immediately clear that this play is going to pull no punches in the depiction of its two protagonists.

Shell (Ffion Jones) and Tash (Sophie Hughes) are two best friends in their mid-twenties that have lived in Swansea all their lives. The powerful bond of growing up together, with all the shared history that entails, gives them a casual yet complete understanding of what makes each other tick.

The chemistry between Jones and Hughes onstage was palpable, and even when they bickered and nastily nipped at one another, they were always only a giggle or a smirk away from being buddies again. The familial nature of their relationship became particularly touching as it was revealed that neither young woman had been blessed with a particularly healthy or happy family life.

Yes, all is not well in Swansea. This was great for the audience, as this tragi-comedy fared better when it turned its hand to the tragedy side of the balance. Shell’s dissatisfaction with a life spent in the city she was born in was deftly portrayed by Jones. Under her every action and word simmered an immobilising fear and indecision. When it boiled over in a drunken rage or a delightfully awkward one night stand (with Oliver Morgan-Thomas as the sexually frustrated Robyn), we really empathised with her.

The grimily tiled and tackily lit set stood in for all the key locations in Shell’s life: a kebab shop, her kitchen and the toilets of a club. The fact that everywhere looked a little similar really emphasised the suffocating small horizons of Shell’s world.

Where the play faltered was in layering in the comedy. The dialogue often sparkled, particularly when it fell into the rhythmic quality of the Swansea accent. Unfortunately, the big comedic moments seemed a little contrived, whether an escalation in tension that seemed a little too quick, or choices that the characters made that just seemed illogical. When a character behaved oddly and it later became clear that it was only in order to set up a joke, the dent in the illusion halted the laughter. The scene transitions too were a little clumsy, with the cast coping with a lot to do.

However these sections were underscored nicely by the pounding base of dance music. It was easy to get swept up in the feeling that we were on a night out and the club was just around the corner. As always, the intimate space of the Old Red Lion provided a great home for this lively production.

Previous: Much Ado About Nothing, St Paul’s Church – Review
Next: Screwed, Theatre503 – Review