Home » Features and Interviews » Interview with Owen Calvert-Lyons, Head of Theatre and Artist Development at Ovalhouse 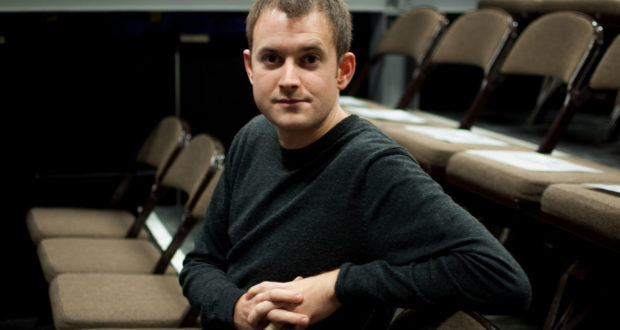 Interview with Owen Calvert-Lyons, Head of Theatre and Artist Development at Ovalhouse

South London fringe theatre Ovalhouse has welcomed innovation since the 1960’s, hosting a huge variety of new work from its building in the shadow of the iconic Oval Cricket Ground. Soon, the ambitious theatre will undergo an innovation of its own: In 2019, Ovalhouse moves to a brand-new venue in Brixton designed especially to fit its ambitious expansion plans. Owen Calvert-Lyons – fresh from a three-year stint as Artistic Director of Eastleigh’s Point Theatre – is the latest of three new recruits, whom Ovalhouse hopes will provide ‘a great boost to our capacity, energy, and expertise’ ahead of the move. Laura Sampson met him in his third week on the job to find out more about his plans as Ovalhouse’s Head of Theatre and Artist Development.

How would you describe Ovalhouse to someone who didn’t know it?
It’s a London fringe theatre with a rich history of supporting radical theatre. Feminist theatre, LGBT, theatre as protest – I could go on – began or were nurtured here. Working here is a fantastic opportunity to explore what radicalism means now, in the 21st century. Overtly political theatre? Young people’s theatre? Some other kind of brave, risk-taking work? I can’t wait to find out.

Your role looks a lot like that of an ‘Artistic Director’, but that isn’t your job title. Why?
Because Ovalhouse has separated out the artistic programming from the more business-management side of an Artistic Directors’ job – a huge role, especially now. I’ll be focusing solely on programming work and nurturing artists. Ovalhouse had begun to do this before I joined – more ‘joined up’. We’re really interested in the whole of the artists’ journey – in some cases from their very first theatre experience, to making their first work and beyond. In our current building, we’ve achieved that as best we can, focusing on making performance for our two theatre spaces. The new building will have a lot more rehearsal spaces, which means our footprint as a developer of art will be much bigger, without the need for performance to be the only end result.

What lessons did you learn from running the supported artist programme at The Point?
Perhaps the most important thing of all was about the meaning of the word ‘support’ – looking after the whole person not just materially, but emotionally as well. Artists – especially those making brave and risky work – often seem supremely self-confident and strong. But like all people (perhaps more so), they are prone to moments of vulnerability. In those moments, the value of kindness and friendship is as high as any other form of support you can think of.

Anything else?
Yes – I learned how important it is to be brave enough to dare to make bold work, and bold decisions. I hope to make, and nurture, lots of bold decisions in this new role.

How does your vision for Ovalhouse extend its existing plans, as well as complement them?
Ovalhouse is a small organisation that can move quickly when it needs to – a great freedom for such a well-respected theatre. I want to make sure it retains that agility where programming decisions are concerned, through the coming changes and into the future.

Other than that, there’ll be a more dedicated children and family programme from 2017, the scope of which will be fuelled by my passion for, and experience in, the area. It will build on what the theatre already offers, and will now be at the heart of our audience development programme for the next year. I’m also keen to put a lot of energy into introducing Ovalhouse to more people who already live in the area. The theatre is known, but there are still a lot of people who don’t really think of coming here. We’d like to change that – here in Kennington as well as after our Brixton move.

Coming back to the existing building and 2016, what are you especially excited about in Ovalhouse’s current season? Did you have any influence in programming it?
Both the summer and autumn seasons were programmed before I arrived, partly to give me thinking space, but I got stuck into artist development work straightaway. It’s been hugely exciting to start working with the current artists here so soon. I’m particularly looking forward to Seiriol Davies’ HOW TO WIN AGAINST HISTORY, which opens in mid-July. It’s an urgent and brave piece of theatre, which started life as an Ovalhouse ‘First Bite’ [Ovalhouse’s existing development scheme for brand-new work], and now it’s grown into an utterly engaging fully-fledged show. In this season’s First Bites, STRAWBERRY VALE by the company 9 Grams of Moon is doing some astonishingly ambitious things with incorporating performance with live animation and music. But I’m looking forward to everything, really – a diverse programme that really does have something for everyone.

Is variety the most essential part of Ovalhouse’s programming policy?
Well, we love variety and diversity – hugely important aspects of an appealing programme – but that doesn’t mean we can’t programme shows that are similar in style or genre. Similarity can be synergy – deepening as well as broadening understanding in particular areas, and giving audiences who’ve liked one piece an obvious ‘next thing’ to see. As long as the piece reflects Ovalhouse’s values and ethos – brave, risk-taking and challenging radical theatre – then we’re happy to consider it.

How about plans for your own first season?
Exciting plans are already underway for early 2017, although it’s still too early to talk specifically about them. We’ll be launching our first Associate Artists programme then, too: a commitment to nurturing five chosen artists (financially and artistically) over a two-year period. This level of commitment is pretty rare – I hope it shows our desire to become a harbour for artists, as well as a platform. One of the five places will be ring-fenced for a young artist under 25, but we are inviting artists at all different stages to apply. Support will be bespoke for each one.

For more information about Ovalhouse and to see what’s on, visit Ovalhouse.com.