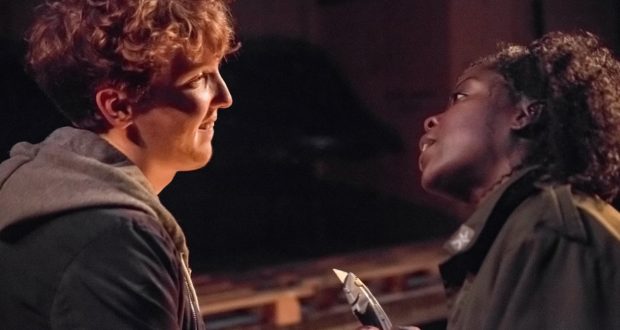 Cons: The studio is a small, claustrophobic space, which might unnerve some.
Cargo, Arcola Theatre  – Review

Pros: A tense, thought-provoking story with strong, dedicated actors and a neatly crafted design. Cons: The studio is a small, claustrophobic space, which might unnerve some. Occasionally, the timeliness of a production not only has an effect on the play, but also on the audience; its content hits close to reality, making us stop and think. Tess Berry-Hart’s bold new drama Cargo, playing at the Arcola Theatre, does just that. Cargo is an 80-minute thriller, with no interval, presenting a portrait of the fear, courage and despair that comes from leaving behind everything you know and love to seek a better&hellip;

A timely and thrillingly written drama, superbly told, that keeps you gripped throughout

User Rating: Be the first one !
Occasionally, the timeliness of a production not only has an effect on the play, but also on the audience; its content hits close to reality, making us stop and think. Tess Berry-Hart’s bold new drama Cargo, playing at the Arcola Theatre, does just that.

Cargo is an 80-minute thriller, with no interval, presenting a portrait of the fear, courage and despair that comes from leaving behind everything you know and love to seek a better life in a new place. We meet Joey (Milly Thomas) and Iz (Jack Gouldbourne), a brother and sister, Sarah (Debbie Korley), travelling alone, and the mysterious Kayffe (John Schwab). All are travelling illegally across the English Channel in the cargo hold of a ship. Set in a future when the western world has collapsed, these people are running from their homes to seek refuge in Europe. Through their journey, we learn about their lives, where they’re headed, why they’re running and just how much they are willing to sacrifice to get there.

Each actor brings passion and energy to the high-stakes story. Gouldbourne is delightful in his professional stage debut as younger brother Iz, to Thomas’ stellar portrayal of big sister Joey. Korley is a powerhouse of a storyteller as Sarah, who may have lost more than she will gain in her trek. Schwab’s portrayal of Kayffe elevates the conflict and fear to new heights in an already intense story. The company respond off one another extremely well.

Berry-Hart’s story is not only strong, but timely in its telling. In an age where some may feel reluctant to tackle pressing issues of our political age, Berry-Hart boldly tackles the issue of migration, refugees and asylum seekers head on, but through a futuristic setting. Without commenting directly, the audience are forced to take notice of what it might feel like to leave your home because it’s no longer safe, and to consider the frightening unknown and unanswered questions that come with such a journey.

Set in the Arcola’s Studio 2, Cargo begins telling you the story from the moment you enter the space, thanks to Max Dorey’s brilliant design. Keeping in line with the Arcola’s eco-friendly ethos, pieces of metal shipping containers line the space, along with seats crafted out of black plastic bin bags and wooden slats that help you as an audience member become part of the ‘cargo’ yourself. Christopher Nairne’s beautiful visceral highlights our need for light. David Mercatali’s direction allows the audience to feel part of the story, with the audience surrounding the playing space on all sides. The actors commit fearlessly to their characters, which is not only a tribute to their talent, but also their trust in Mercatali’s firm hand on the tiller.

Cargo is an enthralling piece of theatre that excites and captivates its audience from start to finish. I highly recommend this gripping, topical play.

Previous: Interview with Owen Calvert-Lyons, Head of Theatre and Artist Development at Ovalhouse
Next: I’m Getting My Act Together & Taking It On The Road, Jermyn Street Theatre – Review