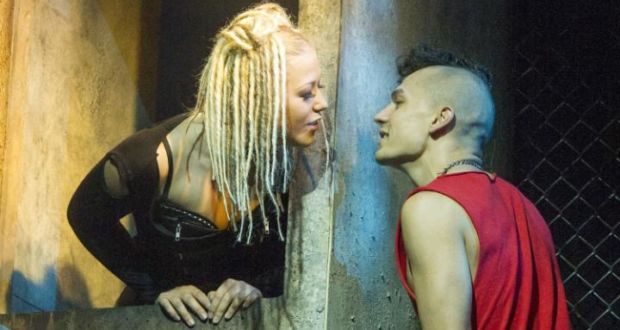 Pros: Full of energy! There are some incredible performances and you have to love the snarling live band giving it the full punk effort from the top of the stage.

Cons: It’s a West End musical, so don’t expect too much in way of depth of story.
American Idiot, Arts Theatre – Review

Pros: Full of energy! There are some incredible performances and you have to love the snarling live band giving it the full punk effort from the top of the stage. Cons: It's a West End musical, so don't expect too much in way of depth of story. When it comes to musicals centred on a single band, it probably helps to like said band. For that reason, this was the first show in the genre I've ever felt any urge to see. And there have been plenty of choices before. Queen, Abba, Spice Girls? Thanks, but no thanks from me. But&hellip;

From air guitars to actual guitars, American Idiot is a musical just different enough to appeal to a whole new audience of theatre goers.

When it comes to musicals centred on a single band, it probably helps to like said band. For that reason, this was the first show in the genre I’ve ever felt any urge to see. And there have been plenty of choices before. Queen, Abba, Spice Girls? Thanks, but no thanks from me. But then not many others fancied that last one either, based on its short life span. How about the Take That musical due next year? Absolutely not. In fact, I shall leave the country the day that one opens. But what about Green Day? Oh go on then, I’ll give it a go, because this band was part of my student life.

American Idiot, the album, was Green Day’s response to post 9/11 America. It was a political and social statement on the stupidity and disconnect many felt frustrated by. And the show opens with this fully in mind, starting with an anguished scream as the characters watch the news with its talk of war, both from politicians and fellow countrymen. That scream leads directly into the title song, setting the tone immediately. The full ensemble belt it out, complete with synchronised air guitars. Feet were tapping all around.

There is, however, an elephant in the room that needs addressing: the story. Face it, it’s a West End musical, and however much the album it’s based on had a story, it isn’t Shakespeare. If you’re expecting a complex story, you are going to be disappointed. But for the record…

Three small town boys, disenchanted with their lives, decide to leave for the big city where everything will be so much better. Spoiler alert: it isn’t. One doesn’t even get to leave for personal reasons. One eventually signs up to the army. And the third, our leading man, falls in with the wrong crowd, where drugs start to rule his life. Oh, and there is a love interest too. Obviously. Some musical rules cannot be broken.

Maybe that sounds harsh, but there are lots of positives as well. If you’re looking for something high octane, well performed, visually well constructed and with plenty of great music, you’ve found it. This is a musical for a younger generation, with foul language, and drugs-and-sex-references everywhere. The music, of course, is fantastic. The live band are positioned very visibly, which adds a whole extra dimension. And they are not the only ones who know their way around a guitar, as the leading cast members show throughout.

There are some superb performances, particularly from Alexis Gerred, who steals the show as his character struggles to cope with his war injuries. But that’s not to downplay the rest of the cast, who never once falter.

The Arts Theatre is a good fit for American Idiot too. It’s small enough to make it feel intimate, something this show requires. Much larger, and the power of the music would be lost. The show might have struggled to fill a larger venue anyway; Green Day sold a lot of records, but they aren’t going to pull in the masses you will see at the next Andrew Lloyd Webber monstrosity.

American Idiot ultimately left me in two minds. Part of me feels theatre needs to be more challenging, the story deeper. And if you feel that way too, this one’s probably isn’t for you. But at the same time, I really enjoyed the music. Green Day have written some great tunes over the years, and I enjoyed the energy the performers gave it. So if you want to spend 90 minutes enjoying a full-on show and even better, you are a Green Day fan, it’s well worth a shot. You won’t be disappointed.