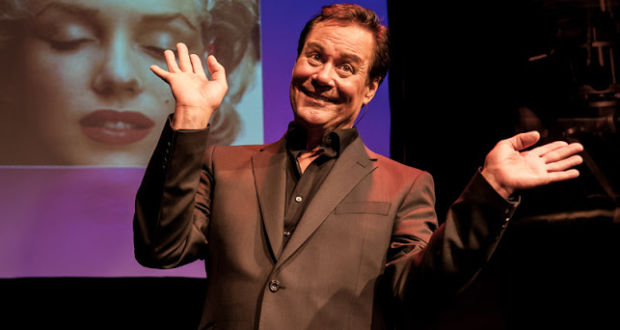 Pros: Christopher Lemmon’s performance is strong and heartfelt with great characterisation of Hollywood legends.
Cons: The show is too long and the pace wanes significantly.
Twist of Lemmon, St James Theatre – Review

Pros: Christopher Lemmon's performance is strong and heartfelt with great characterisation of Hollywood legends. Cons: The show is too long and the pace wanes significantly. It goes without saying that Jack Lemmon is one of Hollywood's greats. From unashamedly camping it up opposite Marilyn Monroe in Some Like It Hot to his hard hitting, Oscar winning performance in Save The Tiger, Lemmon was the poster boy for the golden age of Hollywood and his characters warmed audiences' hearts. Behind the silver screen façade, however, Lemmon suffered from alcoholism. So what happened to Lemmon's family and, importantly, his son Christopher?&hellip;

A wonderful and emotional one man show which gives an insight into the unique father-son relationship behind one of Hollywood's finest leading men.

User Rating: Be the first one !
It goes without saying that Jack Lemmon is one of Hollywood’s greats. From unashamedly camping it up opposite Marilyn Monroe in Some Like It Hot to his hard hitting, Oscar winning performance in Save The Tiger, Lemmon was the poster boy for the golden age of Hollywood and his characters warmed audiences’ hearts. Behind the silver screen façade, however, Lemmon suffered from alcoholism. So what happened to Lemmon’s family and, importantly, his son Christopher?

Twist of Lemmon is the name of Christopher Lemmon’s memoir which celebrates the loves, trials and tribulations of his father’s life. First published on Fathers’ Day in 2006, the book offered a unique insight into Lemmon as a man, an actor and a father. Fast forward a decade and Christopher’s memoir has been adapted into an award winning one man play, which enjoyed its London premiere recently at the wonderful St James Theatre in Victoria. The downstairs studio is a delightful performance space for both actors and audience members and although managing to find a seat is a bit of a nightmare by candlelight, the intimate environment is perfect for shows like this.

The stage was adorned with wonderful images of Lemmon in some of his most illustrious roles and as the lights went down I was reminded of what an acting genius Jack Lemmon was. Suddenly Christopher walked through the audience, jumped up on stage, turned around and the audience all smiled as Christopher is the spitting image of his father. Unbeknownst to me this resemblance would be the main theme of the show because as soon as Christopher started talking and asking us how he could best describe his father, he became Lemmon in front of the audience’s very eyes.

Truth be told, I was a bit shocked at first. I assumed that Twist of Lemmon was going to involve Christopher telling us about his own interesting and turbulent life spent in the shadow of his father. To suddenly have Jack Lemmon staring back at me caught me off guard but once I got used to the idea, I was pleasantly surprised. Christopher is terrific as his whimsical, stuttering father. His facial expressions are on point and even simple nuances such as a flick of the hand are magical. Playing his father, Christopher spearheads through the first act reminiscing about how he discovered his craft early on and how he quickly learned that ‘you gotta make them laugh and cry kid!’. From meeting his first wife (Christopher’s mother) to landing his first major film role (for which he won an Oscar!), the audience sees the stratospheric rise and eventual fall of a troubled star.

Lemmon isn’t the only star the audience sees in Twist of Lemmon. In the blink of an eye, Christopher portrays the likes of Gregory Peck, JFK and Walter Matthau with glee. There are wonderful video montages designed by Simon Clarke that bring Christopher and Jack’s stories to life. However, I feel the show would have been tighter with just one act and the video montages weren’t used to their full potential as I found myself craving more images and videos whenever the pace dragged, which was often.

On the whole, Twist of Lemmon is a strong production and the direction by Hugh Wooldridge is creative, fun and honest. I couldn’t help but empathise with Christopher who, after re-enacting his father’s life, and death, six nights a week, must need a hug.