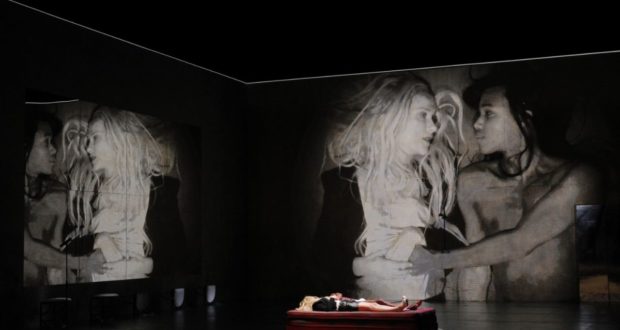 Pros: Brilliant performance by Huppert, a chance to see three Phaedras in one!

Pros: Brilliant performance by Huppert, a chance to see three Phaedras in one! Cons: Overlong and infuriatingly avant-garde in places. Strap in, for this is almost as impossibly long as Isabelle Huppert's legs. At three hours and forty minutes, Phaedra(s) delivers a triad of highly ambitious and frankly bamboozling interpretations of the Greek mythological figure. As part of LIFT Festival Odéon‑Théâtre de l'Europe and director Krzysztof Warlikowski have pushed the boundaries of theatre and performance, dividing audience opinion. They've certainly created a unique experience, but it’s not necessarily a successful one. In the original Greek myth, Phaedra is the wife&hellip;

An emotionally raw trilogy which challenges as much as it intrigues.

Strap in, for this is almost as impossibly long as Isabelle Huppert’s legs. At three hours and forty minutes, Phaedra(s) delivers a triad of highly ambitious and frankly bamboozling interpretations of the Greek mythological figure. As part of LIFT Festival Odéon‑Théâtre de l’Europe and director Krzysztof Warlikowski have pushed the boundaries of theatre and performance, dividing audience opinion. They’ve certainly created a unique experience, but it’s not necessarily a successful one.

In the original Greek myth, Phaedra is the wife of Theseus, but is struck with deep a yearning for her stepson Hippolytus. This burning lust lies at the heart of all three Phaedras, and representations of love, sex and desire are the connecting thread between them. Isabelle Huppert is a powerhouse, delivering three distinct performances in her native French with commendable energy and rawness. She is celebrated for her risqué choices onscreen and here there is no exception.

Set designer Malgorzata Szczesniak has kept it simple, the Barbican stage resembling an abandoned warehouse with little but a bed, sink and shower at the walls. There is an impressive moving glass compartment which glided incredibly slowly across the stage, whether for emphasis or sheer mechanics is unknown. Szczesniak clearly understood that the spectacle here is to be the actors themselves, not their surroundings.

The first Phaedra, directed by Wajdi Mouawad, unfortunately was my least favourite of the three, and served to set an initial negative response I found hard to shake. It opened with a live performance of an Arabic song, which accompanied a sparkly bikini-clad dancer who gyrated across the sparse set for quite a length of time. Huppert finally arrived in full socialite apparel, complete with dark coat and sunglasses, and called herself Aphrodite. When she was not in the midst of an endless, confusing monologue about love, desire and the world, as a whole she was legs akimbo, cavorting around the stage vomiting and bleeding from her lower regions. I felt it screamed “metatheatre” as much as she screamed “I love!” and seemed to be trying far too hard. This was evident in my eavesdropping – I heard audience members make loud comments during the lovers’ tragic copulation.

The second Phaedra by Sarah Kane was my favourite: depicting Phaedra as a Stepford wife with little to no outward emotional display. Huppert performed her as a marionette, mechanical and cold. Her words and silences revealed her true nature to us, and her confession of love to Hippolytus – now depicted as a selfish spoilt man-child – was equally pathetic and sympathetic. It was also the only time we saw Theseus and her daughter Stophe make an appearance; in my opinion these relationship dynamics complete the myth. The story of Phaedra is not all about one love and one loss; it is cataclysmic in its domino effect on every character and I felt this interpretation was the only one to place this emphasis centre stage.

The third and final Phaedra is loosely based on J.M. Coetzee, with Huppert playing Elizabeth Costello the author, who was interviewed on stage. As part of the discussion about Eros and sexual contact between gods and mortals she briefly morphed into Phaedra, with her interviewer as Hippolytus. For the first time we saw Phaedra as eloquent and commanding, sure of herself and her own convictions. However, despite including film clips to further demonstrate her point, I found the academic discourse served little purpose. This final act was preceded by another dance act featuring the sparkly bikini, who repeated so many head bangs I ended up seriously concerned for her wellbeing!

Phaedra(s) concluded with an applause which seemed to last almost as long as the play itself, though I believe the majority of it was for Huppert and her chameleon qualities. A refreshing take on Greek mythology and theatre itself, but it’s dragged down by a degree of self-indulgence.