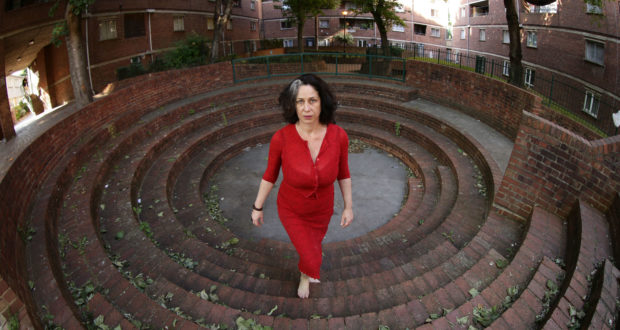 Natasha Langridge | In Memory of Leaves

‘In Memory of Leaves’ and the Power of Site-Based Work

Theatre is a collaborative art form, communicating its story and ideas through text, design, direction and performance. But another integral part of this collaboration is the physical theatre space itself. For Natasha Langridge‘s solo piece In Memory of Leaves, this space isn’t just a storytelling venue—it’s the subject of the story being told. The site-responsive and site-specific work, which focuses on the development of Langridge’s housing estate, is part of the InTransit Festival, a performance festival that responds to the changing urban landscape and makes use of public and private spaces throughout the Royal Borough of Kensington and Chelsea. In this guest blog, Langridge discusses her motivations behind In Memory of Leaves, the specific power of site-based work, and the changing neighbourhood at the piece’s core.

I’d just watched the massacre of a beautiful old park beneath my window by developers as part of our estate’s ‘regeneration.’ It broke my heart to see the trees being pulled up and chopped down and I had to write about it. I was compelled. And the new replacement park that the developers have made—which is really quite shit in comparison—seemed like the appropriate place to stage the monologue.

I couldn’t stop them cutting the trees down; I tried but they wouldn’t listen. But I could write and voice my protest and process my outrage and connect to my community, who all mourn the loss. Some of my neighbours had played, sat, loved, walked their dogs in that park all their lives. That place was integral to our community.

I look to my right. And down. Into the little park. Althone Gardens.

A cherry tree is just beneath me. And beneath that a bench. Where city lovers steal a kiss in the chaos of London mornings, where Moroccan elders meet their sons to light up a tagine for lunch, where a Granny hands out the best supermarket deals of the day as birds sing of other day to day stuff.

The very beginning of In Memory of Leaves is performed in the new Althone Gardens, which one of my neighbours described as ‘a cage for people.’ I put the audience there so that they can orient themselves, and will know where I’m talking about later in the monologue. I then take the audience to a tiny amphitheatre at the back of my block of flats. During the performance the audience will discover that the place in which they’re sitting—the tiny amphitheatre—will soon be demolished, allowing them to share a glimpse of the unease felt by those who live here.

In a way, In Memory of Leaves is a receptacle for a community of voices. It reflects the experience of people living in a shifting landscape. And though it’s specifically about places on our estate, it’s also global. We are not the only people living through uncertain times.

In Memory of Leaves tells the story of the park, the amphitheatre and my experiences at the refugee camp in Calais, all framed within a love story. All sorts of people have walked past as I’ve rehearsed the piece in the tiny amphitheatre. People of different ages and sizes and ethnicities. People who could be in the monologue. Like moving scenery, the estate’s inhabitants who walk past are all relevant to the piece and the story I’m telling.

The place and the piece connect all the disparate people who walk past and who live here. We share the place. The place binds us. The place that will soon be gone. Our community will be lost. I’m bearing witness to the community of birds and the community who listen to the birds singing in the trees in the mornings. And to the kids who played under the cherry tree I loved in the old park. The park must have seen all sorts of goings-on for generations.

During rehearsals, my neighbours in the flats that back onto the tiny amphitheatre come to their windows, even lean out of their windows, to watch. The play, being where it is, is already infiltrating my neighbours’ consciousness—just as they had infiltrated my consciousness as I created the piece. By being performed in the tiny amphitheatre, the monologue has also given a place that isn’t used much anymore a new life.

I’ll leave you with a piece of the monologue:

This small concrete circle. It lies 30 seconds from my back door. At the end of a snakelike path littered with leaves and fag ends. At night foxes run across it. I can hear them calling to each other. Sometimes teenagers gather inside it to flirt, to plot, to smoke. In the morning birds sing in the trees. It’s really their place. And the squirrels. Not many people do sit here now. It’s a lonely place some say. There used to be a slide in the middle. But they took that away.

In Memory of Leaves will be shown in various locations through 26 June as part of the InTransit Festival. Admission is free.