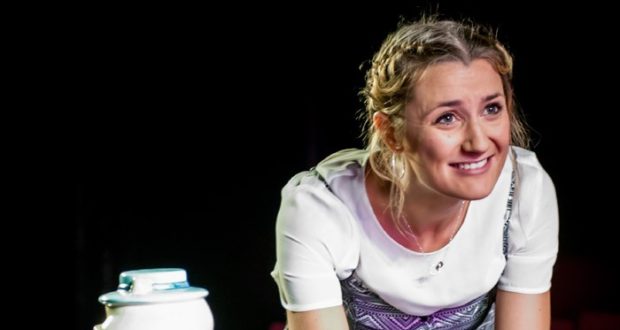 Pros: Consistently funny, with quick-witted, truthful performances, engaging characters and wonderful sound design, presented in an atmosphere that feels alive. Cons: A few distracting costume and set design choices that don’t seem to resonate with the story being told. Eigengrau gives us the opportunity to spend an hour and a half in the company of four highly relatable twenty-somethings, all four of whom are living in London and all four of whom are desperate to find some real human connection. It’s proving difficult, due in no small part to the fact that they demand solid, dependable qualities in one&hellip;

A production brimming with the disorganised passion of young adulthood. Like a sitcom, the joy of watching this play is in spending time with a cast of relatable characters and seeing their lives intertwine.

User Rating: 3.65 ( 1 votes)
Eigengrau gives us the opportunity to spend an hour and a half in the company of four highly relatable twenty-somethings, all four of whom are living in London and all four of whom are desperate to find some real human connection. It’s proving difficult, due in no small part to the fact that they demand solid, dependable qualities in one another, while simultaneously struggling with their own flexible morals and constantly shifting identities.

I don’t know whether it was the ‘young adults living in the big city’ theme (reminiscent of FRIENDS), or the fact that the characters quickly end up in a love triangle and then a love square, but It struck me that the play has taken archetypal characters from a sitcom and then given them a dose of reality. The ditzy dreamer, Rose (Lotti Maddox), is genuinely unstable and untrustworthy; the bossy neurotic, Cassie (Annie Jackson), is actually in the difficult process of establishing how feminism fits into her life; the loveable womaniser, Mark (James Sheldon), hides a nasty streak of detached dishonesty; and the bumbling slob, Tim (Nicholas Stafford), is bereaved and showing signs of depression.

This ‘reality’ does not come at the cost of the comedy:, the play is consistently funny. The dialogue really pings back and forth between a cast that seems to relish all the half-finished sentences, overlaps and interruptions. These characters are indecisive, but the cast’s full commitment to all of their fleeting passions allows them to surprise us with well-observed idiosyncrasies and some really funny deliveries of lines. It’s a joy to watch these characters interact, with humour generated from their conflicting worldviews: Mark’s description of ‘a real man’ sounds to Cassie a lot like a description of ‘a terrorist’.

This production feels alive, even in its lighting choices. Instead of shrouding us in darkness, the audience remains lit throughout. In combination with the thrust staging, this meant I was able to share my experience with the rest of the audience. For instance, in a series of short intermissions, the audience are left alone in the theatre and bombarded with sound designer Paul Freeman’s brilliant collages of noise. There are short snippets of dialogue, music and verbalised thoughts. I shared a chuckle with a woman opposite me as we made out a collection of phrases skewering media buzzwords, then watched her face fall as we heard a nightmarish description of inner torment. In a later scene, I made eye contact with the same woman during an extended onstage depiction of fellatio. It was an awkward, schoolboy smirk-inducing moment and a moment of liveness that ultimately made the experience more memorable.

Just a couple of things prevented me from being completely absorbed by the play. While the costumes generally illustrated the characters succinctly, I occasionally felt that there was a disconnect between a characters’ description of their clothes and what they were actually wearing. A stranger distraction is that the set design has the characters orbiting what looked to me like a giant open casket. As they scrambled in and out of it, I kept wondering why this symbol of death should be such a constant, ominous presence in a play that otherwise depicts so thrillingly young adults living in the moment with their whole lives ahead of them.

By the end the metaphor remained unclear, but it really didn’t matter. What I will remember is a tightly directed, amusing and often surprising production, full of warm, human characters, fluorescent lights, bad karaoke and unfinished cigarettes. Well worth a trip to the King’s Head for anyone who is, has been, or is wondering what it’s like to be a little bit lost and a little bit in love in their twenties.

Note: After publishing this review, it was brought to our attention that Eigengrau is played in the set of Christie in Love, which is the main show at the King’s Head Theatre.