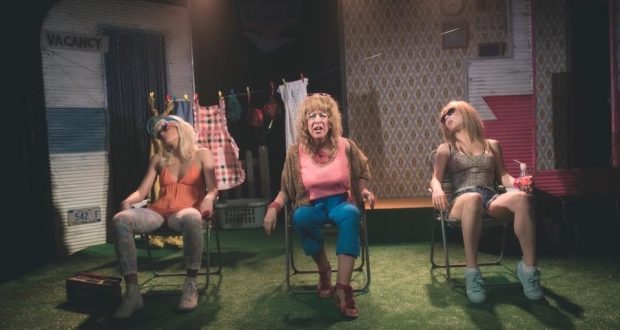 Cons: The band was far too loud in parts, and drowned out the cast
The Great American Trailer Park Musical, Waterloo East Theatre – Review

Pros: Strong ensemble, original score, great direction  Cons: The band was far too loud in parts, and drowned out the cast Anything that has the words ‘trailer’ and ‘park’ in it will always get my vote as I love a bit of trash. I'm also fond of musicals, so when I heard that The Great American Trailer Park Musical was having its London premiere I grabbed my wife-beater vest, a can of Bud, and ran to get a ticket. Currently on at the wonderful Waterloo East Theatre, this original musical is loud, brash and, much like some of its characters,&hellip;

This musical is a joy and superbly packaged up. It's like hot greasy grits

Anything that has the words ‘trailer’ and ‘park’ in it will always get my vote as I love a bit of trash. I’m also fond of musicals, so when I heard that The Great American Trailer Park Musical was having its London premiere I grabbed my wife-beater vest, a can of Bud, and ran to get a ticket. Currently on at the wonderful Waterloo East Theatre, this original musical is loud, brash and, much like some of its characters, in your face! The Waterloo East Theatre, situated within a converted railway arch, is one of my favourite local community theatres in the capital as it never disappoints and is the perfect venue for a tight show like this.

The brainchild of writers David Nehls and Betsy Kelso, The Great American Trailer Park Musical sets out to explore the weird and dysfunctional relationships between the tenants of the fictional Armadillo Acres Trailer Park in Florida. It’s dead classy. No, really. From the stripper on the run to the agoraphobic housewife pining for her kidnapped baby, from the sharpie sniffer to the pregnant teen, this show unashamedly overflows with all the trailer park clichés you’d expect and, mixed with some delicious songs, you have a rollercoaster of raucous laughter and leopard print.

The cast consists of only seven actors and is the strongest ensemble I’ve seen so far this year. The comic timing is fine-tuned, the hillbilly accents are superb (especially seeing that this is the first time this show has ever been performed by an all British cast!) and the vocals are like eggs sizzling on the bonnet of an abandoned Pontiac.

West End star Rosemary Ashe leads the cast as Betty who, along with the fabulous Jodie Steele as Pickles and the hysterical Michelle Bishop as Lin (which is short for linoleum because that’s what she was born on – oh yes!), act as narrators throughout the two acts and are a delight on stage. I felt like I was watching Drop Dead Gorgeous on crack! Bishop’s doe-eyed Lin, and her portrayal of thick Tina who works at ‘Stand By Your Flan’, constantly had me in stitches.

Jemma Alexander as the agoraphobic housewife Jeanie is incredible. Her delivery of the line “Who do you think covered your nachos with spray cheese?” will go down in infamy for this reviewer, alongside her powerful rendition of ‘Panic’. Pippi, the stripper on the run, is stunningly played by pocket rocket Sabrina Aloueche whose awesome vocals hit you like roadkill in headlights! The redneck testosterone comes in the form of Adam Vaughn as Jeanie’s wandering-eye husband Norbert, and Josh Dever, as the psychotic Duke.

The hero of this piece is director Kirk Jameson. Jameson’s direction is fresh, funny and creative. The songs, under Jameson’s eye, are vulgar and funny, yet heartfelt and honest, and they drip off the cast’s mouths like too much cream on a cherry pie. As someone who has recently become single, I found the ‘Owner Of My Heart’ and ‘It’s Never Easy’ duets between Vaughn, Alexander and Aloueche just mesmerising. The high energy score flowed brilliantly thanks to musical director James Taylor, although I did find the band far too loud for such an intimate venue.

You can see why this show has gained cult status since it’s Off Broadway run a decade ago, as it doesn’t take itself seriously and is just great fun. I’m off to get a mullet!