Home » Features and Interviews » Dominic Cooke, From Theatre to Telly 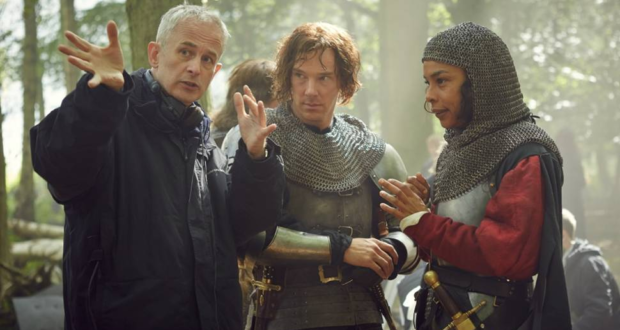 Dominic Cooke with Benedict Cumberbatch and Sophie Okonedo, on location filming Hollow Crown: The Wars of the Roses

Dominic Cooke, From Theatre to Telly

Reading Dominic Cooke’s CV is quite the lesson in modesty. He was associate director at the Royal Shakespeare Company, where he won an Olivier Award for his production of The Crucible. Under his artistic leadership, the Royal Court staged Jez Butterworth’s Jerusalem and promoted such emerging talents as Penelope Skinner and Mike Bartlett. These days, he’s an associate director with the National Theatre, where he just won his second Olivier for directing the revival of Ma Rainey’s Black Bottom. New horizons obviously beckoned, so, later this week, Cooke fans and novices alike will be able to witness his first foray into television. Hollow Crown: The Wars of the Roses is the follow-up to the successful 2012 BBC series, featuring Shakespeare’s Henry VI (adapting its three plays into two installments) and Richard III. We spoke to Cooke to find out more about the differences between theatre and telly, directing Shakespeare and, of course, working with Benedict Cumberbatch.

Why did this project appeal to you?
Shakespeare has been the cornerstone of all my work as a director. I started as an Assistant Director at the Royal Shakespeare Company and I have directed many of his plays since. When I left the Royal Court in 2013 I was looking to work on screen, and when Sam Mendes called me I was both terrified and thrilled by the prospect of making three epic films in one go as my first experience. But the clincher was having the chance to take my relationship with Shakespeare’s plays into a new arena and for a new audience.

Hollow Crown: The Wars of the Roses features a dream team of acting talents – tell us more.
The main challenge of casting the project was its scale. The number of speaking parts was huge and the logistics were very complex. We shot over fifteen weeks and needed actors to be available for that time, whilst only being used sporadically. That said, because of the success and quality of the first series of Hollow Crown, actors were very keen to be involved. And many of the cast I’d worked with before in the theatre: Benedict and Sophie, for example.

How different was it directing for TV than directing for the stage?
There are many similarities with working on screen and stage. Actors require similar things from a director in both: a vision of the whole, a sense of how their character fits in and an ability to give the right input at the right time. Then with Shakespeare there’s the crucial question of how to make the language natural and clear. The main differences are that on screen you need to tell the story with shots, so where you put the camera is the key question, and one that I loved solving with my brilliant Director of Photography Zac Nicholson.

And did you prepare for your directorial TV debut differently from how you usually prepare to direct a play?
I felt I was well prepped for the role; I was assistant director at the RSC, associate director under Michael Boyd for four years and now associate director at the National Theatre, so I’ve done a huge amount of Shakespeare.  My responsibility as a director of Shakespeare is to realise the work for the here and now, for an audience here and now, so in preparing to do Hollow Crown I looked to the cinema for inspiration. I decided I wanted to make three really thrilling films. I watched a lot of war films, like the incredible opening sequences of Saving Private Ryan and Apocalypse Now. So yes, the approach to my first foray into directing TV was different in that respect – but I still insisted on six weeks of rehearsals. We didn’t have much time to stage the scenes when we were on set and the schedule was packed. Much of Hollow Crown was shot on location in different parts of the country, and you can’t do take after take of a full-on battle scene, so we wanted to be as prepared as possible once the cameras started rolling.

You’ve directed quite a few of Shakespeare’s plays already – are there any still on your wish list?
I’d like to go back and have another go at Macbeth and Cymbeline. I’m really keen also to do the Henry IV plays – their melding of the personal and the political, as well as the insight into leadership are unsurpassed.

Did you aim to keep the new series in line with the previous Hollow Crown in terms of tone and themes, or should we see this as a thing unto itself?
A bit of both! There is a sense of continuity in terms of the production values, use of real locations, historical dress and brilliant actors, but they are their own as well, in the same way the plays are. The Henry VI plays are much earlier in Shakespeare’s career and he was a different writer then to the experienced playwright that gave us Henry V. We had to compress the original texts to get four three and a half hour plays into three two hour films. That gave us a very particular task!

This year is the 400th anniversary of Shakespeare’s death.  What do you think he would make of all the weird and wonderful adaptations and reinterpretations of his plays?
It’s a marker of Shakespeare’s brilliance that his work can be interpreted in so many different ways. I’d like to think he’d enjoy that. And that he’d be fascinated by what the modern age brings to his words.