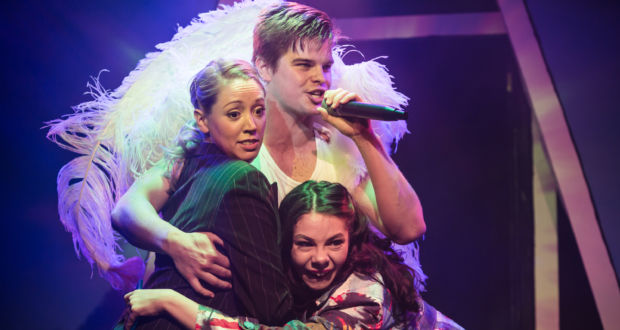 Pros: A catchy original score performed by an enthusiastic cast. An excellent live band keeps us engaged, whilst Louie Westwood’s lisping TV host brings the laughs. Cons: The production’s reliance on tired tried-and-tested tropes. This stunts plot development and lends the show an old-fashioned feel. The new musical comedy Devilish! opens with a bang (and a rollicking song-and-dance number) as an angel nursing an irrepressible longing to be human is shot down over Clapham. ‘Angel’ crash-lands in the back garden of Ruth, beleaguered PA to TV svengali Nick Brimstone. And with the BBC (Brimstone Broadcasting Corporation) in crisis over the&hellip;

Devilish! tempts us to indulge in an evening of undemanding entertainment, but should have demanded more of itself.

The new musical comedy Devilish! opens with a bang (and a rollicking song-and-dance number) as an angel nursing an irrepressible longing to be human is shot down over Clapham. ‘Angel’ crash-lands in the back garden of Ruth, beleaguered PA to TV svengali Nick Brimstone. And with the BBC (Brimstone Broadcasting Corporation) in crisis over the imminent cancellation of The Y Factor, he might just have glided straight into a job. But will Angel sell his soul in return for fame, fortune and a HELLO! ready penthouse?

The lively opening number sets the tone for a night of high-camp high-jinks. The original songs are catchy and upbeat, and the live band and ten-strong cast do a good job of selling them to us, unapologetically owning the intimate pub-theatre space. Admittedly, I would have liked to see a little more choreographic innovation. Nevertheless, there’s something a bit special about fringe musical theatre performed literally inches from its audience’s faces – it draws you into its world in a way a perfectly polished West End behemoth can’t. The cartoon-inspired set is spare but cleverly designed, and the production’s solution to the problem of those pesky flying scenes (a bewinged Ken doll on a stick) is inspired.

Unfortunately though, this initially promising satire ultimately fails to satisfy. On one level, the unapologetic jazz-handiness of it all works, poking fun at the entertainment industry in a nudge-nudge, wink-wink kind of way whilst allowing us to revel in its pure joyous absurdity. However, the plot hinges on tired tropes (‘the wannabe starlet and the casting couch,’ anyone?) and resoundingly unoriginal resolutions (a handsome stranger solves all said wannabe’s problems by trotting her quick-smart down the aisle). The cast play their parts for all they’re worth, but although Louie Westwood ups the comedic ante with his lisping (Alan Carr-inspired?) TV host, a lack of substance eventually begins to grate.

Put it all together and there’s something disconcertingly old-fashioned about the whole thing. As the (metaphorical) reek of over-ripe cheese increases in strength, I find myself increasingly frustrated by the show’s reticence to go a bit further, delve a bit deeper or just try something a bit different. I’m afraid Oliver Lansley did the whole ‘angel in 21st century Britain’ thing in a much more original manner a decade ago, with ‘Immaculate’ at the Edinburgh Fringe.

Devilish! dishes up an undemanding evening of fun and frolics for fans of fuss-free musicals and/or slightly sweaty half-naked men in feathers. If you don’t like your musical feasts rounded off with a generous cheese platter, though, you might want to give this one a miss.