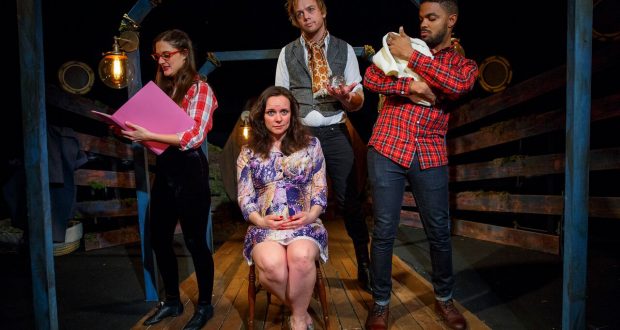 Pros: Some brilliant comedic performances and insightful writing. An entertaining evening. Cons: Some pieces are far more successful than others. It had been my intention to visit the Old Red Lion much before now. Underexposed, however, was the first performance I had the pleasure of seeing at this charming north London pub-theatre. This new writing night presented insightful snapshots of unconventional characters as well as exposing some exciting talent to the fringe stage. The first piece was Native Tongues, a strange disconnected duologue that depicts a former couples' gym session transcending into a multi-dimensional, time-travel nightmare. With apes, telepathy,&hellip;

There is real variety and some exciting talent on show in this tightly orchestrated evening.

It had been my intention to visit the Old Red Lion much before now. Underexposed, however, was the first performance I had the pleasure of seeing at this charming north London pub-theatre. This new writing night presented insightful snapshots of unconventional characters as well as exposing some exciting talent to the fringe stage.

The first piece was Native Tongues, a strange disconnected duologue that depicts a former couples’ gym session transcending into a multi-dimensional, time-travel nightmare. With apes, telepathy, connection with alien races and a hint of bestiality, this piece had a broad scope. Although there certainly was some sentiment, the mimed theatrics and lack of time meant that this short piece was a little bewildering.

The Revolution Will Not Be Grammatically Correct was a short monologue about an unlikely pairing at a public demonstration. Deftly written (by Mike Carter) and subtly directed (by Kathleen Douglas) this solid piece shed light on the quiet revolutionary style of an unlikely activist. Apparently not all revolutions begin with a bang.

One of the stronger performances of the night came from Connor Mills in Bonus Of Contention. This short play, the first of three to be written and co-performed by Gabrielle Curtis, was well written and subverted the idea that the male in a heterosexual relationship is purely sexually driven. Although it can be argued that this is an already outdated stereotype, this piece played with the idea nicely.

The Goblin King was the final piece before the interval and plunged us into a Grimm’s fairytale world of David Bowie and child abduction. This play challenged the feeling of needing to have achieved milestones (such as raising a family) by a certain age. The small stage struggled to contain the four performers and the whole piece felt a little convoluted for the 15 minutes it was given. The vocal talents of Emily Bell, however, did not go unnoticed.

Bones kicked off the second half of the evening. The action took place in an American gift shop. An overqualified shop attendant and a businessman tried to work out what is truly important. The relationship in this play was touching, complex and strongly defined. An understated gem of the night.

A Meaningful (Albeit Brief) Encounter was a particularly short piece in which a young woman tried to sell her kiss and tell story to OK magazine. Was she obsessed or did she truly connect with the mysterious celebrity? Unfortunately this piece was too brief to explore either argument fully.

London-Damascus was the dramatic powerhouse to the evening. Cleanly directed (by Nick Myles) and well performed by Freddie Wintrip and Reece Mahdi, it depicted a digital love story from two very different societies. This affecting story had the emotional potential for a full length play.

A great balance of audience connection and clever writing, Cetait Ouf was an attack on the 9 to 5 society. The advertising office-worker in this piece blamed her lack of fulfilment on the very thing which she has been taught to want: her career. Performer Sophia Flohr was truthful and direct. An intelligent rant that flowed as if spoken by a friend after a few pints. A strong performance and precise writing from Laurence Vardaxoglou culminated in a powerful piece.

The Artistically Protected Right To Over-React had Gabrielle Curtis playing a third obsessive ex. Her dialogue was again well written and the performance was accurate, but it did seem as if each of Curtis’s three characters could very well have been the same person. The laugh out loud moments of this piece came from Ryan Wichert’s increasingly frustrated IT worker.

All in all this was a thoroughly enjoyable night at the theatre. Although not all of the pieces seemed to fit the brief, there was some very exciting talent on show.

Previous: Win tickets to The Buskers Opera at Park Theatre
Next: My Mother Said I Never Should, St James Theatre – Review

James spends his time between Brighton and London. So... on the train, mainly. He loves new writing but is more than happy to sit through anything with a good story and great performances. He trained as an actor and can sometimes be seen doing a little bit here and there. He is also aiming to get some of his ideas on paper and in front of an audience. One of these days.