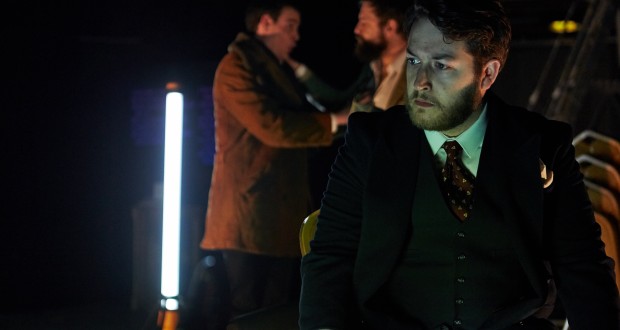 Pros: The performance is in the round and all the action happens so close to the audience that I could see tears streaming down Giulietta’s cheeks.

Cons: The English captions – aptly projected on the walls – sometimes were too concise, limiting the enjoyment of those who don’t understand Italian.
Popup Opera: I Capuleti e I Montecchi, Carousel – Review

Pros: The performance is in the round and all the action happens so close to the audience that I could see tears streaming down Giulietta’s cheeks. Cons: The English captions – aptly projected on the walls – sometimes were too concise, limiting the enjoyment of those who don’t understand Italian. The Carousel is surely one of the most unusual venues I’ve been to. Formerly an industrial warehouse in the heart of Marylebone, is now converted into a café-restaurant and arts space. Two rows of chairs aligned against the four walls accommodate the 60-strong audience, while Bellini’s I Capuleti e&hellip;

A close-up on opera, where Bellini’s bel-canto is stripped down to its delightful essence.

The Carousel is surely one of the most unusual venues I’ve been to. Formerly an industrial warehouse in the heart of Marylebone, is now converted into a café-restaurant and arts space. Two rows of chairs aligned against the four walls accommodate the 60-strong audience, while Bellini’s I Capuleti e I Montecchi is performed in the round. I’m not sure if people on the second row were able to see clearly what happened when the characters went down to the floor but, luckily, I was sitting front stage and I couldn’t have had a better view.

Director James Hurley’s decision to shift the period from the original 13th century to the modern era is perfectly in line with the ground-breaking approach to classical heritage offered by Popup Opera. The set is minimal but well-constructed, and the five characters – wearing smart-casual clothes and carrying guns and cell phones – use it wisely, going on and off stage from different directions and facing every possible angle in alternation. A web of lightbulbs hangs from the ceiling while, on the floor, some more lights and portable neon lamps are switched on and off or moved around by the cast, in order to emphasise the dramatic evolution of the story. A chair, few wooden boxes, a suitcase and some smaller props are the few elements on the background.

In the corner, pianist and musical director Berrak Dyer charms the audience with the only musical accompaniment of this beautiful work. If you thought that the staging of a classical opera requires a full orchestra, you’re wrong. Bellini’s melodic composition is delightfully stripped down to the core and all the attention is focused on the singing and the heartfelt lyrics. Fortunately, I could understand most of the words – sung in the original Italian language – but I’ve realised that the captions projected on the walls were quite concise, providing a condensed outline, rather than the unabridged translation of the libretto.

The interesting decision to have the actors on stage during the overture – as opposite to the usual merely orchestral piece – helped to introduce the characters and clarify their roles. Hearing their voices at the end of the prelude was a pleasant surprise and throughout the performance I was overwhelmed by its strength and richness of tones, which was seldom too loud or unbalanced.

I Capuleti e I Montecchi is set in Verona, where Tebaldo (Cliff Zammit-Stevens), member of the Capulet family, has kidnapped one of the Montagues, the rival clan in the city. The head of the Capulets, Capellio (Andrew Tipple), asks Tebaldo to marry his daughter Giulietta (Alice Privett), who’s having a secret affair with Romeo (Flora McIntosh), leader of the Montagues, who’s actually their hostage in disguise. Lorenzo (Matthew Palmer) is the man in the middle, who, despite belonging to the Capulets, supports the clandestine lovers and provides the drug that will simulate Giulietta’s death and help her to avert the unwanted marriage. Unfortunately though, Romeo reaches the tomb of his beloved lady before Lorenzo can find him and reveal the trick. Devastated by the news, the young man immediately swallows a strong poison, which will kill him only seconds after the damsel has woken up from her deathly sleep.

You might find the plot familiar, but don’t be fooled. Felice Romani based his libretto on a Renaissance tale that happened to be the same used by Shakespeare for his Romeo and Juliet. Bellini’s major innovation has been to assign the role of Romeo to a mezzo-soprano, a trouser role defied notably – and not so successfully – by Claudio Abbado and, in this popup version, carried out remarkably by Flora McIntosh, who delivers a powerful execution together with a charismatic appearance. Alice Privett’s naïve Giulietta looks genuinely tormented and more than once I saw tears streaming down her blushed cheeks. All three male characters, Capellio, Tebaldo and Lorenzo, are a refreshing presence in this rather emotional tragedy and their vocal range is admirable.

At last a production that doesn’t take itself too seriously and brings opera down to earth, making it entirely accessible to the general public.