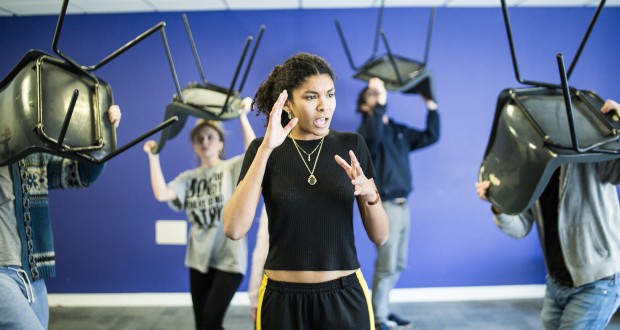 Author: Everything Theatre in Features and Interviews 15 March 2016 0 667 Views

Terrorism is an inescapable part of the reality of life today, especially if you live in a capital city. In London, in particular, it’s not a question of if there’ll be another attack – but of when, and how bad. Pretty much every week, and sometimes every day, you flick on the news and you’re faced with scenes of unbearable, visceral carnage, in real time – terrible human suffering, live and unfiltered.

Obviously, your first feeling when you’re faced with this kind of obscene reality is pity and compassion for the people caught up in it. It really does hurt to watch other people in pain. And then, a split second later, I’m often really conflicted about my own role in the event as a viewer – it feels voyeuristic to watch it, but somehow disrespectful to switch it off. After this first wave of pity and guilt, there’s something else – a voice, loud and clear in my mind that says, with a slight quaver – what would I do if that happened to me? If I was the guy with the charred clothes, the blood streaked face, calling out for his child, how would I cope? Would I have the strength to bear the unbearable, or would I fall to pieces?

My new play, BU21, is my attempt to understand how a broad range of Londoners would deal with a fictional, but totally plausible, terrorist attack. In the play an un-named terrorist organisation (it’s ISIS) shoot down a passenger jet over London with an anti-aircraft missile. Incidental, ISIS do actually posses almost a hundred of these missiles and they are, by all accounts, exceptionally easy to use with even very minimal training. Scary, huh?

The play follows our 6 characters over the course of a year, from the almost impossibly traumatic event itself to the one year anniversary of the crash. And it turns out it’s, at least in parts, a comedy. I mean, WTF?

It’s a very optimistic play about hell on earth.

It would be massively disrespectful and dishonest to try and gloss over the brutal reality of trauma.

It ain’t just relentless optimism, though. It would be massively disrespectful and dishonest to try and gloss over the brutal reality of trauma. For some the traumatic event is simply too much to process – it overwhelms them in an almost literal sense. A mass terrorist attack creates a veritable tsunami of PTSD, and I absolutely don’t think that finding stuff totally unbearable is anything at all to be ashamed about. Mental health isn’t a competition, right?

But the basic fact of the matter is this – one day bad stuff is going to happen to all of us. Your parents will die. You’ll lose your job. One day your world will turn to shit, one way or another. And working out how you respond to Bad Shit is a pretty vital skill – but one that, these days in particular, people shy away from talking about and even thinking about. Just as the emergency services and the security services prepare for terrorism, I think we should emotionally prepare for terrorism.

Is that true? I think so. Either way, I’ve learnt a bunch of stuff about myself from writing it – I mean, a couple of times in rehearsals I’ve missed my stop on the District Line because I was sort of crying like a massive 6 foot 6 baby. Perhaps you’ll learn stuff about yourself too.

More important than this, though, is that it’s actually, totally unexpectedly, a big bunch of fun to watch. I pretty much promise you’ll laugh a lot and enjoy yourself Or Your Money Back [this does not constitute an actual promise]. But it’s probably best if you don’t book a flight the next day. That might all be a bit flash-backy and awkward at the airport.