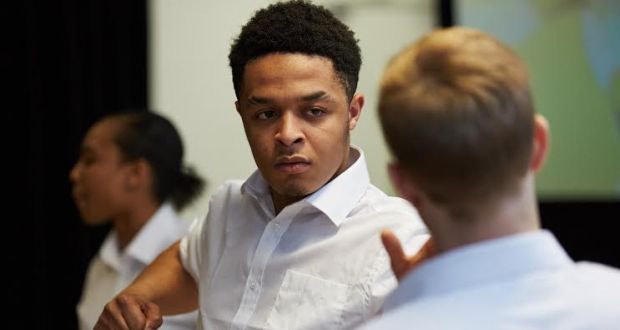 Pros: This forum theatre production is simple and stimulating, and addresses some important issues around adolescence.

Pros: This forum theatre production is simple and stimulating, and addresses some important issues around adolescence. Cons: It doesn’t offer much in terms of high-quality drama. Cardboard Citizens have been working with London's homeless since 1991, producing theatre with a social conscience that actively confronts audiences and asks them to interact with the issues placed before them. Meta, a new play by Sarah Woods, tackles adolescence but adds a quirky, informative dollop of neuroscience in as well. Director Tony McBride presents it as a piece of forum theatre, in which his five-strong cast act out the story before the&hellip;

Cardboard Citizens have been working with London’s homeless since 1991, producing theatre with a social conscience that actively confronts audiences and asks them to interact with the issues placed before them. Meta, a new play by Sarah Woods, tackles adolescence but adds a quirky, informative dollop of neuroscience in as well. Director Tony McBride presents it as a piece of forum theatre, in which his five-strong cast act out the story before the audience is asked to comment, scrutinise and even re-act the piece themselves.

Woods’ play tells the story of Owen (Aaron Russell-Andrews) and Savannah (Nirobi Salakov), two GCSE students wrapped up in a turmoil of hormones, underage drinking and explicit messages. A snatched moonlit kiss lights the fuse of a bomb that jeopardises their friendships, their futures and their mental stability. Elle Louise Payne, Denholm Spurr and Dominique Wood-Whyte all multi-role as a cohort of classmates, teachers and parents.

The action is regularly interrupted for a layman’s explanation of what is going on inside each character’s brain. It is lively, accessible science, littered with technical jargon – neuroma, synapses, dendrites – but complemented by enough helpful analogies for anyone to understand it. The rapid switches between action and analysis are seamlessly delivered by a talented cast, with Spurr putting in an enjoyable performance as the hooting, howling, infantile class bully.

Cardboard Citizens have been touring Meta around local schools and it is easy to see the impact the show could have on young people. It is a challenging, educational piece, that doesn’t feel tedious or didactic – as touring school theatre all too often can – but fresh and stimulating. Woods’ dialogue is authentic, with constant references to Snapchat, screenshots and plus-ones. McBride’s direction is simple and invites interaction and comment.

After the piece’s somewhat downbeat conclusion, McBride energetically chairs a discussion about the characters, their problems, and the challenges a 21st-century teenager faces. A neuroscientist is luckily on hand to provide assistance with some of the more impenetrable ideas being thrown around. It is remarkable how quickly audience members feel comfortable debating with each other, some even having the courage to take to the stage and assume the role of either Owen or Savannah in some of the more provocative scenes.

The exposure of adolescents to sexual imagery, the exacerbating effects of technology on the mental health of teenagers, the roles of parents, teachers and guardians in curbing some of their charges more self-destructive impulses – all these questions, and more, are kicked around in a bubbly discussion that could go on much longer than its allotted half-hour.

Meta isn’t a ground-breaking piece of theatre, but it provokes debate about important topic without dissolving in its own self-importance and its smattering of science is genuinely interesting as well.

Previous: Much Ado About Nothing – Queen’s Theatre, Review
Next: Consequences and The Book, The Space – Review