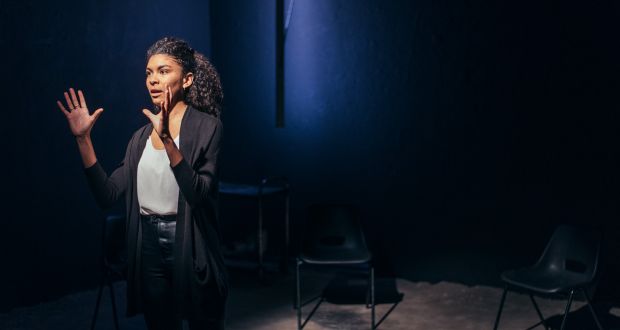 Pros: This piece of verbatim theatre about terrorism swings continuously between moving and amusing; the best recipe to treat such a painfully current topic.

Cons: The apparent lightness with which the subject is treated could attract some criticism.
BU21, Theatre503 – Review

Pros: This piece of verbatim theatre about terrorism swings continuously between moving and amusing; the best recipe to treat such a painfully current topic. Cons: The apparent lightness with which the subject is treated could attract some criticism. Theatre503 is the cutest pub theatre I’ve seen in London. Its mezzanine offers a cosy lounge were theatregoers can withdraw from the noisy drinkers downstairs and wait to be admitted into the auditorium. Inside, the set of BU21 is minimal. In front of a black backdrop there are four chairs, and a trolley with biscuits and a bottle of water. All&hellip;

An outspoken and ground-breaking approach to the crude reality of our society, featuring excellent acting in a meticulous production.

User Rating: 3.58 ( 2 votes)
Theatre503 is the cutest pub theatre I’ve seen in London. Its mezzanine offers a cosy lounge were theatregoers can withdraw from the noisy drinkers downstairs and wait to be admitted into the auditorium. Inside, the set of BU21 is minimal. In front of a black backdrop there are four chairs, and a trolley with biscuits and a bottle of water. All around, we see hanging lights and debris, while, in the corner, a Mickey Mouse toy is smiling, half-buried under a pile of dust.

Thalissa (Thalissa Teixeira) is a 22-year-old girl who talks about all the violence reported every day in the news and the awkward choice we are called to make between the ‘voyeuristic’ interest in watching and the ‘disrespectful’ decision to switch off. In this piece of verbatim theatre, playwright Stuart Slade imagines how six young Londoners will cope with life after being differently involved in a terrorist attack. How would each and every one of us deal with such a horror? Every time we see these things happening on TV, we feel safe because they’re far from us, but Slate’s play is a reminder that nobody is far or sheltered enough to be really safe. This is fiction, but it couldn’t sound more realistic.

It’s 22 July 2016 when a BU21 aircraft, coming from New York, gets hit by a surface-to-air missile before crashing into Parsons Green, a residential area in south London. Thalissa learns on Twitter that her mother has died in the explosion. Ana (Roxana Lupu) is caught in a rain of flaming fuel, while sunbathing in the park. Floss (Florence Robert) is having a sandwich with her dad when a passenger, still attached to his seat, lands in the garden and gives her a glance before passing away. Alex (Alex Forsyth) discovers that his girlfriend was cheating on him with his best friend after the lovers are found incinerated in his bedroom in Fulham. Clive (Clive Keene) has a long way to go to find closure and Graham (Graham O’Mara) is one of the first survivors to appear in the TV live coverage. They’re all members of the same victims’ support group and they are attempting to overcome their trauma or their denial.

The play comes across as a spontaneous stream of consciousness, but I could tell that it’s the result of meticulous study, an impression that is confirmed by the published script. Both the story and the acting are strong. From the second row I could see Thalissa’s eyes filling with tears, Floss’ hands shaking restlessly and Ana’s cheeks blushing while they’re dealing with their ghosts. Graham is great at switching between his drunken and sober self, while Alex takes full charge of his meta-narrative role, breaking the fourth wall to talk directly to the audience and delivering some of the play’s funniest comments. Clive is there to present the flip side of the coin, which he does with complete ease. All the characters work well together, alternating their position centre stage when it is their turn to share their painful memories, darkest feelings or deepest thoughts.

When I’m called to rate a show, I always ask myself the same questions: would this plot work somewhere else? And, if yes, where? BU21 would work in many different formats. It’s an intense performance to watch on a stage, a clever and well-written script to read and I can even imagine it being translated into a film. Well done to this faultless production for finding the right balance between grief and comedy to treat such a sensitive matter.

Previous: Brute, Soho Theatre – Review
Next: Buster Keaton at the Hollywood Canteen… as told by Orson Welles, The Space – Review