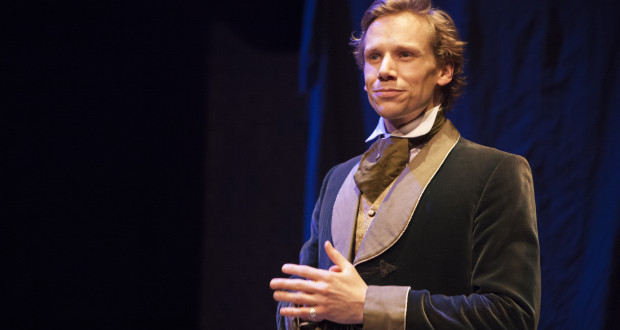 Pros: A touching performance from Rupert Mason as Basil Hallward.

Pros: A touching performance from Rupert Mason as Basil Hallward. Cons: A flabby script. It’s one thing to fall between two stools. It’s quite an achievement to fall between four or five. This production of The Picture of Dorian Gray is not funny enough to be a comedy, not spooky enough to be a thriller, not powerful enough to be a morality tale and not engaging enough to be a drama. I left the Trafalgar Studios struggling to imagine what the production had set out to achieve. Everything seems pretty much in order in the first scene. We have&hellip;

Everything seems pretty much in order in the first scene. We have a simple period setting; a Lord Henry Wotton who is styled to look very much like Oscar Wilde; a pert, pretty Dorian Gray; and a touchingly diffident Basil Hallward, played by Rupert Mason. The drama and emotion of the play really begin and end with this scene; Hallward is left looking like a spare part at a wedding, as the kindred spirits of Dorian Gray and Wotton find each other. Far from being the angelic soul that Hallward fondly imagines him to be, Wotton recognises in Dorian a young man who’s no better than he ought to be. This is not the corruption of an innocent, it’s the devil finding his own, and Rupert Mason’s lovelorn anguish is the most sincere and credible emotion in the whole play.

So it comes as a bit of a shock when Mason turns up in the next scene, dressed in bonnet and bustle for a comedy turn as the Duchess of Harley. And shortly afterwards as Mr Isaacs, and then as James Vane, and then. . . there are twenty-one characters in the play, and a cast of four. Guy Warren-Thomas only plays Dorian Gray, which means that the other three play an average of 6.7 characters each. I saw a panto last year in which all seven dwarves were played by one man. That was a running joke, whereas this looks like no-one told the writers about the payroll constraints. If there are too many characters, there are also too many scenes, with all the associated entrances, exits and rearranging of props. In a larger space that problem might be less noticeable, but in a studio space it is fussy, chaotic and really adds to the impression that a firmer hand should have been taken with the script.

A big question for any production of Dorian Gray is how to portray the supernatural. In this case a life-sized empty frame is used quite effectively as the portrait, ever-present both on stage and in Dorian’s mind, even when it’s supposedly locked in the attic. Overall, however, the production walks an uncomfortable line between using clever theatrical effects to create illusion, and just leaving everything to the audience’s imagination. The fateful moment of Dorian’s wish is signposted with a magical sound effect, while a scary sound effect is associated with any viewing of the disfigured canvas. A stylised scene of Dorian’s debauchery is red lit, and altogether it’s about as subtle as an episode of Scooby Doo.

The Picture of Dorian Gray is a strange beast; Oscar Wilde’s only novel and a story that combines the supernatural with homoeroticism, epigrammatic wit, murder and philosophy. It is easy to see that choices have to be made about which aspects to privilege in staging the story. By failing to make those hard decisions, this production hobbles its artists and ends up being everything and nothing. Only Lord Henry Wotton could make a virtue of such superficiality.