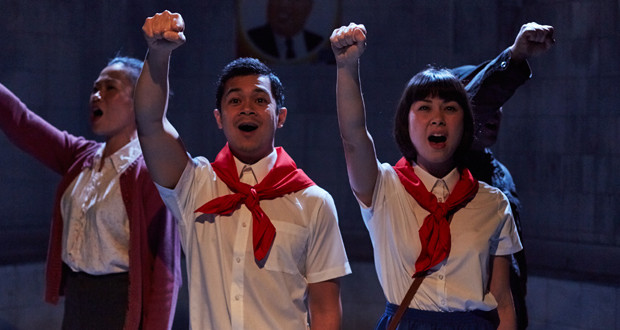 Cons: The play can be quite harrowing at times.
P’Yongyang, Finborough Theatre – Review

Pros: Strong performances complement a powerful script. Cons: The play can be quite harrowing at times. The Finborough Theatre, for those who don’t know, is one of London’s leading Off West End venues. Their artistic policy is to stage shows which fall into two broad categories. The first is revivals of plays which have not been staged in the UK in many decades, the second is new writing. In general, the productions at the Finborough are of a high standard. And P’Yongyang, a piece of new writing, is no exception. In addition to a having poignant script and excellent&hellip;

A poignant and timely reminder of the human cost of the North Korean regime.

The Finborough Theatre, for those who don’t know, is one of London’s leading Off West End venues. Their artistic policy is to stage shows which fall into two broad categories. The first is revivals of plays which have not been staged in the UK in many decades, the second is new writing. In general, the productions at the Finborough are of a high standard. And P’Yongyang, a piece of new writing, is no exception. In addition to a having poignant script and excellent production values, it is incredibly timely.

North Korea seems to pop up in the news at fairly regular intervals, featuring in increasingly depressing headlines. Last week, of course, came the news that the North Korean government had allegedly successfully detonated a hydrogen bomb for the first time. This is on top of countless reports of torture, executions, gulags and famine. In fact, with so much sad news, it is easy to become de-sensitised. One is in danger of forgetting that there are real people who have to endure such a regime. This is why In-Sook Chappell’s new play is so powerful: it uses a love story between two young people in the DPRK to remind us of the human tragedies and hardships which the North Korean people face.

The story follows Chi Soo and Eun Mi, two young North Koreans who dream of becoming actors in the state film industry and of living together in the capital P’yongyang. However, their paths split and their dreams shatter at the hands of the regime. Chi Soo realises that his father’s role in the civil war and the government’s ‘three generations of punishment’ policy have condemned him to a life of poverty, hunger and back-breaking labour. And while Eun Mi’s dream appears to come true, she realises that it relies entirely upon being in favour with those in power, and that young women are easily replaced in the graces of the Dear Leader.

The script is written with tact and honesty. Chappell was born in South Korea and was inspired by a visit to the Demilitarised Zone as well as her experiences with North Korean refugees to write this play. She follows the main characters as their indoctrination starts to break down, and as they witness the horrors of the regime they live under. The stories of concentration camps, famine and abuse are handled with care, and are never overdone; they serve as a bitter reminder that real people are enduring such terrible situations. But it is not simplistic either: the questions of how refugees can integrate into South Korean society is addressed too. Feelings of shame, guilt and regret show that there are seldom fairytale endings, even for the lucky few who can escape the North.

The performances are key in this production and the cast of four do a marvellous job at conveying the troubles of the inhabitants of the DPRK without ever going too far. Anna Leong Brophy and Chris Lew Kum Hoi give great performances as Eun Mi and Chi Soo. At first light and bouncy, the actors’ performances progressively show more desperation as the characters’ situations degrade. They are adeptly supported by Lourdes Faberes and Daniel York, who play a host of additional characters, giving each their own personal feel.

Overall, P’Yongyang is a poignant, timely and sometimes harrowing reminder that the excesses of the North Korean regime are not just newspaper headlines, that they have real human consequences. In the words of one of the characters towards the end of the play: ‘The world does nothing. Treats [the North Korean dictator] like a joke. Everyone turns the other way’. And this is something we could all do to take heed of.