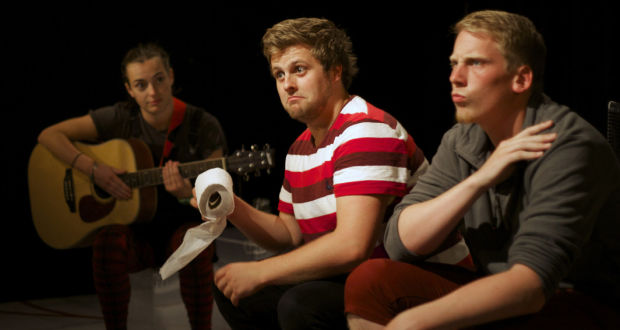 Pros: A combination of action, comedy and tragedy that echoes Chaucer’s themes, performed by a cast whose enthusiasm makes up for their lack of experience.

Cons: The show could do without the improv section.
The Canterbury Tales – New Diorama Theatre, review

Pros: A combination of action, comedy and tragedy that echoes Chaucer's themes, performed by a cast whose enthusiasm makes up for their lack of experience. Cons: The show could do without the improv section. An unseen narrator intones the prologue of The Canterbury Tales, as five pilgrims appear one by one: the geeky man with the huge rucksack, the germ-averse stickler, the girl with the guitar, the hunk with the bum bag and the glamorous blonde. Their personalities are exposed through mime and sound effects as they take their places on the long road to Canterbury. This new interpretation&hellip;

An exuberant cast produce a tapestry of tales that's both entertaining and poignant, with serious themes woven through the hilarity.

User Rating: Be the first one !
An unseen narrator intones the prologue of The Canterbury Tales, as five pilgrims appear one by one: the geeky man with the huge rucksack, the germ-averse stickler, the girl with the guitar, the hunk with the bum bag and the glamorous blonde. Their personalities are exposed through mime and sound effects as they take their places on the long road to Canterbury.

This new interpretation of Chaucer’s 14th-century epic takes his idea of a group of travellers, each with a tale to tell, and breathes fresh life into it. After the story-telling competition is announced, the cast parade around a projection of the road they’re travelling, each reciting a line from their story in turn. It’s a deliberately confusing mishmash of ideas and characters, giving a taste of the variety to come.

The set consists of a modern rail map painted on the floor, on which are scattered a dozen cubes of varying sizes, made from what looks like roofing grade polypropylene. These serve as chairs and tables, but also as juggling balls as the cast use them to punctuate the action.

And action there is, in full. One or two of the tales are narrated, but with choreographed timing, some fully dramatised, with none taking more than a few minutes to complete. A few stories are performed with apparent reluctance, such as the sketch that’s all about farting – and which is enacted only after a vote from the audience. Participation is taken further when three members of the audience are selected to come onto the stage to perform parts in The Miller’s Tale, complete with script, while the rest of the audience narrates from flash cards.

The audience is consulted again after a brief and, we’re pre-warned, lacklustre rendition of The Reeve’s Tale. This time we’re asked for a genre and an accent with which to perform the sketch again. It’s a good idea, but this theatre company’s strength doesn’t lie in improvisation: on the night I was there the actors had no knowledge of the Carry On genre, and were uniformly unable to manage a Welsh accent. One of the biggest laughs of the night came when the cast, after an attempt at the sketch, asked for a suggestion for a different accent and the audience suggestion came back: ‘Welsh’.

There’s a good deal of hilarity, and a general sense of fun and enthusiasm throughout the evening. But there’s a serious theme here, too, of violence and subjugation against women. This is foreshadowed in The Reeve’s Tale, in which a thieving miller is punished by being forced to allow his customer to sleep with both his wife and his daughter – neither of whom have any say in the matter. Later, a parody of a Mr & Mrs-style game show tests husbands’ knowledge of intimate details such as their wives’ birthdays, while each holds their wife on a leash around her neck.

The crude, anti-women jokes leave the audience laughing despite themselves. A recitation of the misogynist lyrics of current rap and chart songs, however, culminates in a genuinely heartfelt monologue relating a scene of domestic violence from one cast member’s childhood.

The 70-minute play starts with Chaucer, but also takes in contemporary themes such as speed-dating, as it careers from one tale to the next. It’s a hugely enjoyable show, performed by a young cast whose enthusiasm more than makes up for their slight lack of dramatic expertise. Sadly neither the show flyer nor the company website list the names of any of the cast, the director or the author, so we’re unable to give these details. And that’s unfortunate, because with great shows like these we want to give credit where it’s due!

Previous: Nutcracker! The Musical, Pleasance Theatre – Review
Next: You For Me For You, Royal Court Theatre – review