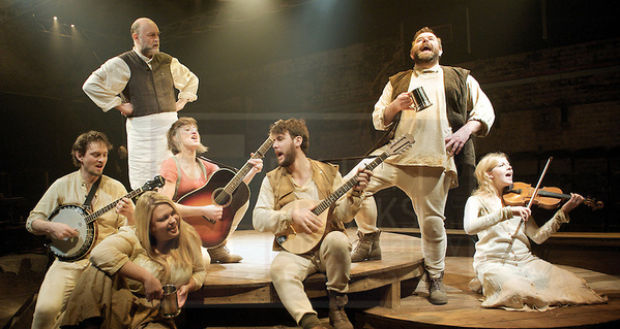 Cons: Sometimes the action gets a little too close for comfort.
The Ballad of Robin Hood, Southwark Playhouse – review

Pros: Strong women, cool sword fights and witty repartee. Cons: Sometimes the action gets a little too close for comfort. Tacit Theatre presents Greg Freeman's The Ballad of Robin Hood, a new version of the classic tale. Staged in ‘The Large’ at Southwark Playhouse, the audience is seated on three sides of the stage, and the walls of the theatre are draped in greenery, creating a feeling of total immersion. This effect is enhanced when the action extends into the audience, for example, with actors standing in the aisles or traveling along the scaffolding that circles above and behind&hellip;

A fresh and exciting take on a familiar tale that will ensure you never look at Robin Hood the same way again!

User Rating: 4.53 ( 3 votes)
Tacit Theatre presents Greg Freeman’s The Ballad of Robin Hood, a new version of the classic tale. Staged in ‘The Large’ at Southwark Playhouse, the audience is seated on three sides of the stage, and the walls of the theatre are draped in greenery, creating a feeling of total immersion. This effect is enhanced when the action extends into the audience, for example, with actors standing in the aisles or traveling along the scaffolding that circles above and behind the audience (part of Giulia Carisi’s clever set design).

The downside to this setup is that it is impossible to have a perfect view all the time, although director Annabelle Brown’s staging is effective in minimizing time spent looking at the actors’ backs. And as much fun as it is to get up close and personal, there were moments when those in the front or on the aisles may have felt the actors were a little too close, particularly when they were running full speed with swords.

The mood was established right away: even as the audience took their seats, the cast were on stage singing, playing instruments and chatting with the crowd. I was running late (beware: there is some very confusing construction around Elephant and Castle tube station) and just caught the last few minutes of the pre-show, so I can’t confirm this, but they appeared to be serving drinks from the stage.

In this version, Robin Hood (Owen Findlay) has been captured by the Sheriff (Tom Daplyn) and is being held in a Southwark tavern. The landlady (Rosalind Blessed) and the locals (Ellen Chivers, Joel Mellinger, Oliver Ashworth) debate whether to obey the Sheriff and fetch soldiers to arrest Robin Hood or to risk hanging to stand up for the outlaw and everything he represents. To buy time, they take turns presenting a series of ‘ballads’.

This Robin Hood is a darker figure than we might expect, more of a flawed anti-hero than a noble protector. But Findlay brings a genuine, charming quality to the role that kept me rooting for Robin Hood throughout, despite his moral ambiguities. Dora Rubinstein’s feisty Maid Marian, far from being the typical damsel in distress, is a powerful fighter and influential speaker in her own right. She is more than a match for ‘Mr. Hood’, and their witty wordplay (not to mention the impressive swordplay!) was one of the high points for me.

The dialogue is clever, with some particularly astute, and hilarious, observations on gender politics. I would love to explain more, but I can’t without giving too much away, so I’ll leave you with the line that was my– and, based on the laughs, many others’– favourite: “It is a man’s undoing when he puts his sport before his woman.” The script also features a lot of very London-specific humour, which unfortunately, being American, went a bit over my head. I got the gist enough to be entertained, but I didn’t get as much out of some of the jokes as the Londoners in the audience.

The actors are all individually impressive– singing, dancing, playing instruments, fighting, and even juggling– but their true strength was in their ability to work as an ensemble to bring the ballads to life. Their work is supported by that of the designers: Becky Evans’ period-style costumes are simple and lovely, the sound design by Ella Wahlström sets the scene persuasively for each new story and Leo Steele’s lighting design is very effective in creating transitions from present-day to flashback. All in all, The Ballad of Robin Hood is well worth seeing; an unexpected but welcome bit of fresh air between the usual Christmas fare.

Previous: A Rabbi, a Vicar and an Imam Walk into a Comedy Club, JW3 – Review
Next: I Love You Because, London Theatre Workshop – Review