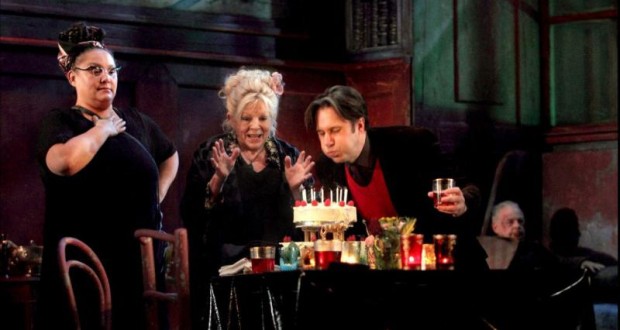 Here We Go and Evening at the Talk House, National Theatre – review

Pros: Some interesting ideas and a few solid performances.

Cons: The writing lets down both pieces, and the frequent walk outs make it difficult to focus.
Here We Go and Evening at the Talk House, National Theatre – review

Pros: Some interesting ideas and a few solid performances. Cons: The writing lets down both pieces, and the frequent walk outs make it difficult to focus. Going to the National, one of London's and the world's most cutting edge theatres, is always such a treat. Over my 17 years in this theatrically rich and vibrant city, whenever I've seen anything at this ground-breaking theatre it's always blown my mind, been breath-taking and captivating. Until now. It breaks my heart to write these words but the new double bill consisting of the 40 minute Here We Go and then 90&hellip;

Both plays show promising intentions, but are ultimately disappointing.

Going to the National, one of London’s and the world’s most cutting edge theatres, is always such a treat. Over my 17 years in this theatrically rich and vibrant city, whenever I’ve seen anything at this ground-breaking theatre it’s always blown my mind, been breath-taking and captivating. Until now.

It breaks my heart to write these words but the new double bill consisting of the 40 minute Here We Go and then 90 minute Evening at the Talk House, is dire. So dire in fact  hat audience members walked out of both productions, which horrified me. What horrified me even more was that I was jealous and wanted to escape too!

First up was a new work from Caryl Churchill, Here We Go. This short play centres on a funeral and explores themes of death, life and the afterlife. The first scene, with a strong cast of eight characters mourning at a wake, is gripping. The plot and fast script flow well as we hear different stories about the man who passed away (and his ginger cat!), yet every now and again the characters individually tell us how they too died, which adds a wonderful layer to the story. Sadly, this great scene stops and you don’t see these characters again until curtain call. We then see the man who has died standing, scantily clad, at the pearly gates and endure a mammoth monologue, beautifully performed by Patrick Godfrey, as he questions where he is. It’s interesting, but way too long and convoluted. We are then shown him in an old age home being dressed, undressed, dressed, undressed, dressed and yes undressed again. I loved how this showed the monotony of his final days, but the constant dressing and undressing really only had to be done once. Doing it over and over again, with zero dialogue, was painful. Cue a mass walk out and groans across the auditorium. The play had such a promising start and I just wish we’d gone back to the wake to hear more from the likes of Susan Engels’ wonderful drunk gran or Joshua James’s expectant father. The actors, set and direction are all good, it’s Churchill’s script that lets them down.

Evening at the Talk House is the brash new play from the wonderful American character actor and writer Wallace Shawn. The plot revolves around the ten year reunion of showbiz friends at an almost legendary club, the Talk House, and delves into showbiz backstabbing, death, failure, success and terrorism. It’s an interesting mixture of themes which you would hope would work, but yet again it just doesn’t. I thought some of the terrorism speeches, clearly written before the current terrifying state of the world post-Paris, were interesting yet so leftfield it make the play as a whole feel perplexing and a bit tortuous. Cue a few walk outs once again. The cast are strong and the performances are solid, although some more than others. Josh Hamilton’s protagonist Robert is engaging, but opening the show with a massive long and banal monologue after what we’d just endured at Here We Go killed it for me and the people around me (three of which were sleeping!). Sinead Matthews as the troubled waitress Jane, obsessed with death and wanting to leave this mortal coil, is superb as well as the man himself, Wallace Shawn, as has been TV star Dick. Naomi Wirthner’s Annetee – tailor to the stars and part time assassin – felt a bit weak, as was Simon Shepherd’s Tom.

It may have been the plot, or the second wave of walk outs, but I just couldn’t connect with these characters, or with the production as a whole. This double bill needs an overall look and some proper fine tuning.

Previous: Little Eyolf, Almeida Theatre  – Review
Next: A Rabbi, a Vicar and an Imam Walk into a Comedy Club, JW3 – Review