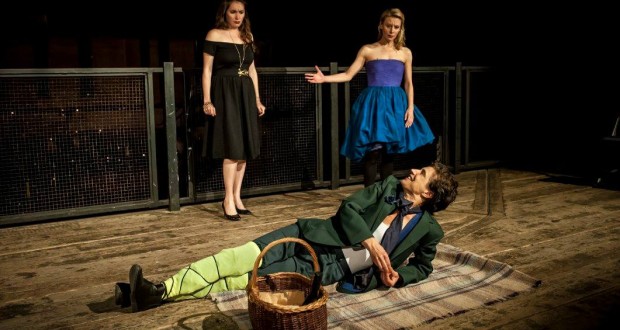 Pros: Show-stopping comic performances enhanced by clever staging. Cons: Rapid character-switching was sometimes confusing. Ghostly vocal harmonies chime in the dark. A woman with a cornflower in her buttonhole speaks Shakespeare's famous lines 'If music be the food of love'... So began Natasha Rickman's irreverent, hilarious 90-minute Twelfth Night: A Gender Experiment – a month-long run starring 4 differently gendered six-actor combinations. Our night was “all female cast”, as opposed to, for example, “cast opposite gender”, and “all male cast”. Shakespeare's comic masterpiece is certainly the right play for this gender experiment... The story follows Viola, a noblewoman separated&hellip;

Exuberant, fast-paced gender comedy in an unusual and atmospheric setting.

Ghostly vocal harmonies chime in the dark. A woman with a cornflower in her buttonhole speaks Shakespeare’s famous lines ‘If music be the food of love’… So began Natasha Rickman’s irreverent, hilarious 90-minute Twelfth Night: A Gender Experiment – a month-long run starring 4 differently gendered six-actor combinations. Our night was “all female cast”, as opposed to, for example, “cast opposite gender”, and “all male cast”. Shakespeare’s comic masterpiece is certainly the right play for this gender experiment… The story follows Viola, a noblewoman separated from her twin brother by shipwreck. Washed up in Illyria – home of Duke Orsino’s court – thinking her brother dead, Viola decides to present herself to Orsino (who she secretly loves) in male disguise. Things only get more complicated…

If Twelfth Night is the right play, then the Rose Theatre is the perfect location. Discovered in the foundations of a Bankside office block in 1989, it’s the only Elizabethan playhouse of which anything physical survives. Today, it’s a much-loved, partially-excavated cavern. A still pool of water covers the archaeological remains. The main playing space is viewing platform surrounded by railings. Sorcha Corcoran’s resourceful design enhanced the otherworldly feel of the place: fairy lights dotted around created ghostly shadows and reflections on the garishly-lit back wall, and the far ‘bank’ of the pool became the beach of Illyria – stunning despite not being clearly visible behind the safety railing.

This production of Twelfth Night has a small cast for such a big play. All the actors were constantly busy playing several different roles – some, notably Julia Goulding’s Orsino/Feste/Sir Andrew – changing character mid-scene with a mere swap of hat or other tiny prop. That the action was slightly stilted and confusing while all characters were introduced was completely understandable, and actually quite funny. It was easy to forget how intricate a character-establishing role the costumes played, as the setup was deceptively simple – and obviously low-budget. Male characters were dressed in black-and-white suits like slapstick comedians of the 1920’s. Odd splashes of blue and green – a dress here, a buttonhole there – deftly suggested Illyria’s seaside location.

The main playing space (Duke Orsino’s court), being very shallow, and unavoidably intimate, was a glorious intensifier for a whole range of comic effects throughout. Shuna Snow’s flawlessly hammy, officious Malvolio became a pitiable circus clown when victimised by posh drunk Sir Toby (played with collar-loosening lustiness by Elizabeth Andrewartha). Maia Alexander’s earnest Viola/Cesario showcased some of the play’s best gender jokes with rare clarity, especially when paired with Bethan Cullinane’s pitch-perfect comic timing as lovelorn Olivia. One character rushed from right to left – another (often the same actor) rushed back again. Our heads ping-ponged after them. Cue even more laughs.

I was surprised to realise how quickly I’d stopped noticing the single-gender casting once the play was underway. Which was odd – I’d been nervous about it beforehand, having been ‘burned’ by a pretentious single gender show or two before. But this all-female iteration of Rickman’s experiment just worked: it was as playful as it was entertaining, with the added bonus that Shakespeare’s gender jokes rang more deeply. And so did the bawdy bits – characters I’d always pigeonholed as one-note grotesque, I was able to see differently. Is this what Shakespeare intended? Perhaps.

In such a strong cast, it seems churlish to single out particular performances. But I can’t help remembering Shuna Snow’s compelling, vulnerable Malvolio. Maia Alexander was so elegant, I mentally cast her in the next BBC costume drama. I am looking forward to exciting things from Julia Goulding, too; I was sorry she was kept too busy in this show to develop her Orsino into as convincing a character as her Feste.

Overall, this gender experiment was a delightful evening of exuberant, playful, intelligent theatre. I hope I get the chance to find out how the other three compare.