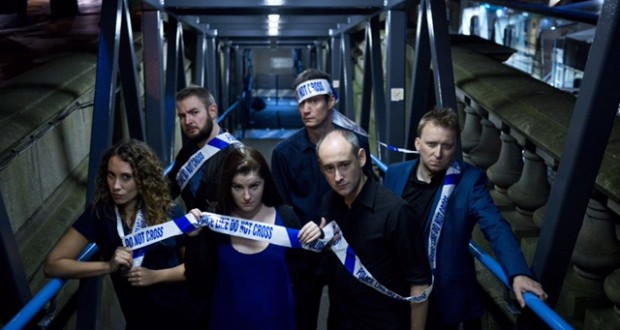 Cons: You can only see it once.
Multiverse and CSI: Crime Scene Improvisation, Bridewell Theatre – Review

Pros: Audience participation! Cons: You can only see it once. The Bridewell Theatre is a quirky space converted from a Victorian swimming pool. On Sunday, November 8th, it hosted a fundraiser for the Central London branch of Samaritans, a volunteer organisation which provides (among other services) a 24-hour telephone line for people who need emotional support. The programme was a double-bill featuring an improvised musical by Multiverse and a performance of CSI: Crime Scene Improvisation, an improvised murder mystery show by London-based group the Chandeliers. Both performances began with suggestions from the audience: Multiverse asked simply for an object&hellip;

A fantastic night - an evening of hilarity and some naughty fun that will leave you feeling like you were part of something unique.

The Bridewell Theatre is a quirky space converted from a Victorian swimming pool. On Sunday, November 8th, it hosted a fundraiser for the Central London branch of Samaritans, a volunteer organisation which provides (among other services) a 24-hour telephone line for people who need emotional support. The programme was a double-bill featuring an improvised musical by Multiverse and a performance of CSI: Crime Scene Improvisation, an improvised murder mystery show by London-based group the Chandeliers.

Both performances began with suggestions from the audience: Multiverse asked simply for an object and a location, and the audience provided “trumpet” and “pirate ship.” From this, the five talented performers created the story of Trevor (Francesa Renée Reid), the trumpet savant who after a decade of piracy is reunited with his long-lost love, the Bristolian beauty Sara Lee Sara (Olivia Mace), at a jazz competition in New Orleans. The one-act musical also featured performances by Robert Carolina, Liz McMullen-Lo, and Neil Goulder, and accompaniment by Tom Hodge (no easy feat!). It explored two possible endings around Trevor’s choice of marrying Sara Lee Sara and starting a family band, or leaving her behind to tour the world with a group of sexy French musicians. But love conquers all, because Trevor and Sara Lee Sara found their happily ever after eventually in both versions of the tale.

Of course, the nature of improv means that this performance was Trevor the Trumpet-Playing Pirate’s first and last on stage appearance with Multiverse. When you see them perform, it will be another story entirely. But I’m still amazed by the level of nuance and sophistication in a performance that was built on nothing but “trumpet” and “pirate ship”. The songs were musically dynamic and featured clever wordplay – especially impressive when you consider that they were making it up on the spot. A particular strength of the group was their ability to work together as an ensemble to navigate spur-of-the-moment chorus numbers, complete with coordinated dance moves and complex harmonies.

CSI: Crime Scene Improvsation also began with suggestions from the audience. This time, they needed a murder victim. Ours was Anna Falactic, a croupier at the Electric Boogalo Casino, where she was murdered by an electric shock from a rigged roulette wheel. The only clue was “CHEATER     S” written next to the roulette table in ketchup and mayonnaise, which led Detective Steve Johnson (Lee Apsey) to conclude that anyone with an “S” name would have to be a suspect. We were subsequently introduced to a colorful cast of characters, including Sebastian Semaphore (James Cann), retired croupier and Anna’s stalker; Simon (Steve Bond), Anna’s rival and lover; Salvador (Matt Andrews), the casino’s lovestruck cafeteria manager; Sheila (Sarah Kempton), Anna’s protégée who dreams of being a magician; Serene (Nicola Lucey), the money-hungry owner of the casino; and Sally Falactic (Danielle Downey), Anna’s saucy mother.

The investigation played out, giving the actors time to establish their motive, alibi, and opportunity, as well as to build up a rich and complicated back story of life at the Electric Boogalo. The cast of seven worked brilliantly together, each of them giving a memorable performance while still serving the story (no annoying scene-stealers here!). Finally, the audience was given the opportunity to interview each of the suspects and then to choose the murderer. In this case, it was Sally Falactic, who responded to her arrest with the obligatory melodramatic monologue – “You’ll want to know why I did it, I suppose?!?” I’d try to explain the details, how at the ripe old age of 107, Sally was jealous of her daughter’s multitude of lovers and resented her for missing an Elton John concert to give birth, but… you really had to be there. And I highly recommend that you be there next time to experience it for yourself!

More information about Central London Samaritans, or to donate: http://www.samaritans.org/branches/central-london-samaritans

Previous: Anita and Me, Theatre Royal Stratford East – Review
Next: In My Head, The Proud Archivist – Review